Providing new disease resistance genes from wild relatives and better access to those genes for breeders. 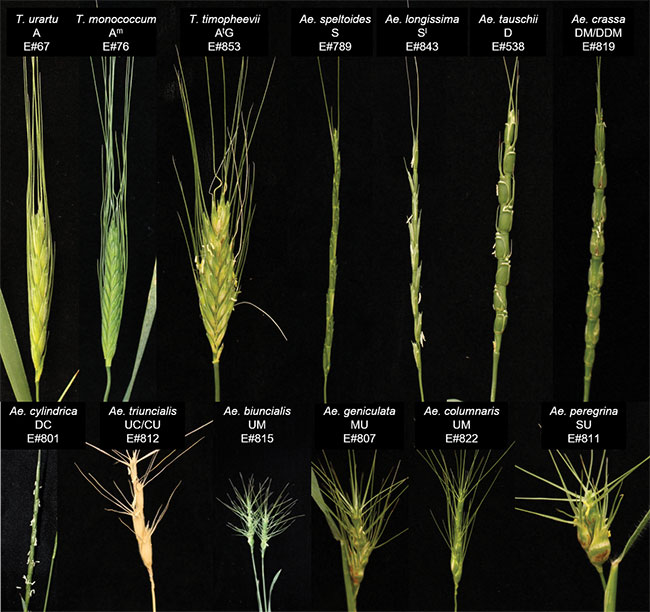 Going to wheat’s wild relatives is a way of accessing some of the genetic diversity lost through domestication, selection and breeding. Photo courtesy of Sylvie Cloutier.

The wild relatives of wheat are a key source of new disease resistance genes. But finding these genes and moving them into adapted wheat lines are challenging and time-consuming tasks. A national effort aims to make this pre-breeding work more efficient, providing all Canadian wheat breeding programs with access to these genes.

The need for new disease resistance sources is ongoing, explains Sylvie Cloutier, who initiated this pre-breeding platform. “Sometimes, especially when the same resistance gene is used repeatedly, the pathogen overcomes that gene. We’ve seen this with leaf rust resistance genes.” So, a new gene with resistance to the new virulent pathogen strain is needed – or preferably several such genes, so breeders can pyramid them together for more durable resistance.

“Sometimes, individual resistance genes just don’t provide enough protection.” In such situations, breeders need to add several of these minor resistance genes to muster a stronger defence against the pathogen.

However, domestication, selection and breeding have narrowed the diversity available in crop gene pools, including disease resistance genes. “Going to the wild relatives of crops is a way of accessing some of this lost genetic diversity,” says Cloutier, a molecular geneticist with Agriculture and Agri-Food Canada (AAFC) in Ottawa.

She explains, “Fusarium head blight and leaf rust are major diseases across the country. Powdery mildew is a serious concern mainly in Ontario, Quebec and the Maritimes, because Eastern Canada’s much moister climate favours this disease. Stripe rust is a particular issue in Alberta, but this disease has the potential to
become a much broader threat in Canada.”

Cloutier’s research group is working with various wild relatives of wheat, including about 30 Aegilops species, as well as a few Haynaldia and Thinopyrum species. Aegilops species have proven to be particularly good resistance sources. “At least 17 of the 66 leaf rust resistance genes identified to date come from nine Aegilops species,” she notes.

Just getting fertile offspring from a cross between wheat and a wild relative can be difficult because their genomes usually do not match up with each other. However, the genomes of certain Aegilops species do match with part of wheat’s genome. Bread wheat has a hexaploid genome, meaning that it is composed of three sub-genomes, known as the A, B and D genomes. These three genomes came together in the distant past through the natural hybridization of three progenitor species; the first hybridization combined the A and B genomes into a single species, and the second added the D genome.

“The B genome of wheat comes from a species related to Aegilops speltoides, and the D genome comes from Aegilops tauschii,” Cloutier says . “The D genome came into bread wheat only 10,000 years ago, which is like yesterday in terms of evolution. These were random events and there were very few of them. Researchers have estimated that the crosses with Aegilops tauschii that produced hexaploid wheat may have happened less than five times. So, the whole diversity available in Aegilops tauschii as a species is really not represented in bread wheat, since only a few individual plants created bread wheat.”

To tap into more of the diversity available in wheat’s progenitor species, Cloutier and her research group have also been working on what is called synthetic hexaploid wheat. Synthetic wheat is a reconstruction of wheat made by crossing A. tauschii and Triticum turgidum (durum wheat), which has the A and B genomes. The researchers use various genotypes of A. tauschii and Triticum turgidum to get more diversity into their synthetic wheats. Then they use these synthetics in crosses with elite wheat lines.

Wild plants have a lot of characteristics that make them unsuitable for agricultural production. Bringing a wild resistance gene into wheat requires backcrossing with elite wheat lines to get rid of any unwanted wild traits. Synthetic wheat also needs backcrossing. “Nevertheless, synthetic wheat remains one of the easiest methods to bring wild relative genes into wheat,” she notes.

Technology boosts progress
Pre-breeding work has been going on for many decades in Canada, but recent technological advances are spurring progress.

Cloutier explains one such advance. “In the past, geneticists – but mainly pathologists – would assess some wild relatives for disease resistance at the phenotypic level, testing the plants in the field or indoors with the pathogen. Their efforts were successful; for example, 44 per cent of the 66 leaf rust resistance genes identified so far are from wild relatives,” she says.

“But the work was very time-consuming and difficult because, once they identified a wild relative with resistance to a specific race of a disease, they still had to make crosses and evaluate the progenies. And they couldn’t tell whether the resistance genes they found were the same old genes that they had tested before or new ones.

“Nowadays, we still do phenotyping in the field or indoors. But in parallel to that, we can do genome-wide genotyping of the plants. Then we match the two types of data together. That gives us a really clear picture as to whether we are looking at a new resistance source or the same old-same old. If we find potentially new sources of resistance, then we do further work with them.”

Other technological developments help with the transfer of wild genes into adapted material, and more advances could be on the way. Cloutier says, “There is potential to use technologies such as CRISPR to bypass or discard all of the undesirable stuff from the wild plant and focus on only the genes we want, but we are not there yet.” 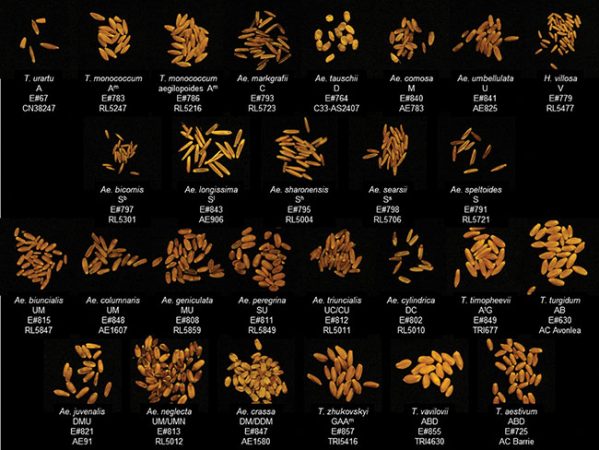 These are a few examples of the wild species that Cloutier taps into for new disease resistance genes, as part of a national wheat pre-breeding effort. Photo courtesy of Sylvie Cloutier.

Pre-breeding platform benefits
Cloutier developed her idea for the pre-breeding platform in 2014. Back then, AAFC’s Cereal Research Centre in Winnipeg was closing, and she was transferred from there to Ottawa and asked to shift her research mandate to wheat.

“So, I tried to find gaps in the existing wheat efforts. I found that Canadian geneticists and pathologists have been really good at identifying wild resistance genes. In fact, they have been pioneering this pre-breeding work – if you look at the rust resistance genes, many were identified by Canadian scientists like Peter Dyck, Eric Kerber, Daniel Samborski and George Fedak. But the transfer of wild resistance genes into adapted lines and their adoption in wheat varieties were sometimes lacking.”

Cloutier also realized why this gap occurred. “In the past, there would be a breeder at a research centre and a geneticist or pathologist. The geneticist/pathologist would work on the pre-breeding aspect, and the outlet for the materials that he or she would develop would be that particular breeder. If the pre-breeding material was not to the breeder’s satisfaction, the material would end up in an envelope somewhere, more-or-less labelled, not labelled, not kept alive, or whatever. There was a lot of waste.”

So, she designed the platform to provide a more co-ordinated approach for each stage of the pre-breeding process, from identification to transfer to adoption, to ensure Canadian crop growers will continue to have access to disease-resistant wheat varieties.

The identification stage involves a collaborative approach. “My idea was to merge the phenotyping and the genotyping, and to have all the phenotyping done by the experts. So, the stripe rust phenotyping is done at AAFC-Lethbridge by Reem Aboukhaddour; the leaf rust at AAFC-Morden by Brent McCallum, AAFC-Ottawa by Cloutier and the University of Saskatchewan by Curtis Pozniak; Fusarium head blight at AAFC-Morden by Maria Antonia Henriquez; and powdery mildew at AAFC-Charlottetown by Adam Foster.”

The genotyping is done as a collaborative effort between Curt McCartney and Colin Hiebert at AAFC-Morden, and Cloutier at AAFC-Ottawa. The data analysis and database work are conducted by Frank You’s bioinformatics group at AAFC-Ottawa.

“For the second stage of the process, we want to make sure we move the wild genes into semi-adapted wheat lines,” she says. “I could identify a great resistance gene in the wild species Aegilops triuncialis, but if I give this wild plant to breeders they will have absolutely no interest in it. However, if I offer them something that looks like a commercial wheat variety and it has that resistance gene in it, then they will be interested.”

To ramp up adoption, the platform is making the semi-adapted germplasm widely available to all Canadian wheat breeders and also providing a database of genotypic and phenotypic data about the germplasm.

“Breeders will want to plant the material in the field and look at it, but they are also interested in things like: What data have you collected on this germplasm over the years? Where is the gene located? What is its importance? So, we are developing in parallel a database to provide this type of information.”

Growing momentum
“It has already been six years since I began this work. It started as a small A-Base project, then a GRDI [Genomics Research and Development Initiative] project, and then a five-year Wheat Cluster project,” Cloutier explains. The Wheat Cluster project (2018 to 2023) is funded under the Canadian Agricultural Partnership by AAFC and Canadian wheat industry partners. She is co-leading this project with Curt McCartney.

“Now our Wheat Cluster funding has been leveraged into a very large, pan-Canadian Genome Canada project,” she says. Cloutier and Curtis Pozniak are the project’s principal investigators in this project, entitled 4DWheat: Diversity, Domestication, Discovery and Delivery.

“[This project] is giving us greater capacity particularly to study Fusarium head blight and build capacity for assessing the semi-adapted germplasm. As well, we have additional genomic capacity, enabling us to explore different technologies for the transfer of genes from wild relatives. We are also developing a much more comprehensive database that will be available to everybody.”

Cloutier notes, “Our pre-breeding work is snowballing. It has been wonderful to be part of bringing together various research and industry partners. The new project is a partnership between AAFC, Genome Canada, the provincial governments of Saskatchewan, Ontario, and Manitoba, and many industry players, including the wheat commissions of Saskatchewan, Alberta and Manitoba.

There is an enthusiasm and a momentum for pre-breeding research right now.”