Sabine Banniza’s project on multiple resistance to three lentil diseases has a fun tagline: Can we score a hat trick? To take this hockey analogy a bit further, the project aims to get some top disease resistance genes from a wild lentil team to join the cultivated lentil team. 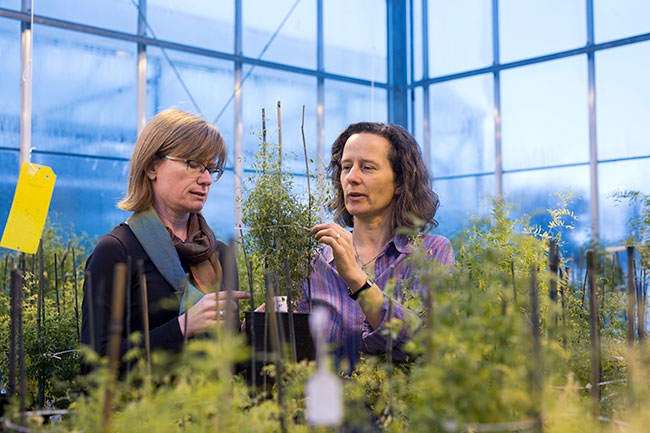 The project involves anthracnose, ascochyta blight and stemphylium blight. These economically important fungal diseases can significantly reduce lentil yield and quality, so having varieties with resistance to all three diseases would be a big help for Prairie lentil growers.

“Resistant crop varieties are the most economic way of dealing with diseases. And, by reducing or maybe eliminating the need for fungicides, resistant varieties are more environmentally friendly than any other way of managing diseases,” explains Banniza, a plant pathologist at the University of Saskatchewan’s Crop Development Centre.

“However, sometimes it is really difficult to find good resistance, so you have to wander a little bit further away, and that is really what this project is about.” In other words, sometimes researchers have to go to wild relatives to find effective resistance genes.

Banniza explains that wild species usually have much greater genetic diversity than crop species. That’s because crop breeders tend to look for a particular set of characteristics that make the crop better for agricultural production and for human consumption. For example, over thousands of years, people working in agriculture have selected lentil lines with pods that don’t shatter so the crop can be harvested more easily. But by choosing that trait and a few other key traits, they have inadvertently decreased the diversity in the cultivated species. “That is why there is only a limited number of genes for any trait in these cultivated species that we use these days, and that is why sometimes we now have to go back to the wild relatives where the diversity is much, much bigger,” she says.

For her hat trick project, Banniza is using the wild lentil species Lens ervoides. This species is known to have high levels of resistance to diseases that affect lentil crops on the Prairies, including resistance that is not found in cultivated lentil lines (Lens culinaris).

The objective of her project is to develop molecular markers for the resistance genes in Lens ervoides. A molecular marker is a DNA sequence that is associated with a particular trait. Breeders use these markers to rapidly screen breeding material in the lab for the desired trait, rather than having to take weeks or months to grow hundreds or thousands of the seeds from different crosses into plants to see which individual plants have the desired trait. Lentil breeders will be able to use the markers from the project to screen for resistance to the three diseases.

Bringing genes from a wild species into a cultivated species has a number of challenges. Banniza says, “One problem is that crossing a wild species with the cultivated species can be quite difficult, although we have solved that problem.” The second issue is that, if the two species are not very closely related, “it is very difficult to do genetic studies on the crosses between the two species because the genetic material of the two parents may not be able to pair up properly, so you can get a jumble of DNA. And then, because you can’t do genetic studies, you can’t develop molecular markers,” Banniza says.

To overcome this hurdle, her research team is doing the genetic studies in only Lens ervoides. They use two Lens ervoides parents – one that is disease-resistant and one that is susceptible – and they study the genetics of the resistance mechanism in the offspring.

Results so far, and in the long-term
The project, which runs from 2013 to 2019, is making good progress. Banniza says, “We are most advanced in terms of anthracnose resistance. We have already developed some markers and have done some preliminary testing. The markers seem to work in crosses with cultivated lentil, although they still need confirmation in some larger tests in the breeding program. So now we are focusing more on stemphylium blight and ascochyta blight.”

Their work with anthracnose has made greater progress, in part, because the research team has been working on it longer. Banniza adds, “I think part of it is also that we have done much more research on the anthracnose pathogen here, so we have a much better understanding of the host-pathogen system. With ascochyta blight and stemphylium blight, we have done some resistance screening and a little bit of genetic studies, but we know far less about those two pathogens so we have to do some catch-up.”

She explains, “When you do these genetic studies, you identify a lot of potential genes that are involved in resistance. To assess the quality of a resistance gene, and particularly its durability, it is quite important to have a good understanding of how the pathogen and the host plant interact. Depending on how they interact, a resistance gene may be more durable or may have a higher risk of breaking down. Once we understand exactly what is happening, we can focus on the right genes.”

The markers resulting from this research will help the lentil breeding program at the Crop Development Centre to quickly, efficiently and reliably screen a lot of lines for the new disease resistance genes. Ultimately, the markers will contribute to getting new disease-resistant lentil varieties to Prairie farm fields.

“Multiple resistance to disease means extra protection and reduced risks for growers,” says Sherrilyn Phelps, agronomy manager with the Saskatchewan Pulse Growers – one of the agencies funding this project. “Knowing that the varieties have some level of resistance means growers have more tools for fighting disease and that they are not relying solely on fungicide applications. Genetic resistance can provide a sense of security that the crop has a built-in first level of defense and then growers could follow up with fungicides for additional control if needed.”