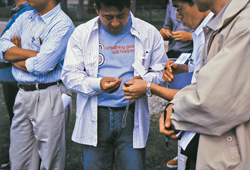 In the late 1990s and early 2000s, word was that documentation and traceability
were coming to the agri-food industry. Programs such as Hazard Analysis Critical
Control Point (HACCP) and the pork industry's Certified Quality Assurance (CQA)
were considered appropriate systems because they ensured processors were documenting
their operations and establishing a baseline for food safety protocols.

In 2007, another such drive for certification is taking place within the IP
soybean trade. The Canadian Identity Preserved Recognition System (CIPRS) has
been in place since 2002 and is strictly a voluntary program. Now, it is being
offered through the Canadian Grain Commission (CGC) as a means of further guaranteeing
identity preservation (IP) and traceability in the hopes of strengthening existing
relationships, and even opening markets with new customers.

Roger Rivest, a marketer with Great Lakes Organics in Petrolia, Ontario, along
with other members of the Canadian Soybean Exporters' Association (CSEA), was
a key player in getting CIPRS developed and implemented. The program was developed
in response to concerns relayed from Asian customers through companies exporting
soybeans from Canada. "They were hammering us on genetic engineering in
soybeans, asking 'What are you doing and how do we know that it's not contaminated,
and what are your tolerances?'," outlines Rivest, who sits on the technical
expert advisory committee for CIPRS. "We put on these seminars and half
of them spent at least one hour discussing how to make sure they're not getting
Roundup Ready soybeans. So this is how CSEA started looking at all of this,
the same way we do in organics with third party audits for total traceability."

There are many companies with an IP program that have been successful in meeting
their customers' requirements without the need for third party certification.
Others, however, have found that CIPRS provides added credibility due to the
requirement to meet Canada's national standard for IP, independent third party
audits and the certification issued by the CGC, which is an internationally
recognized grain quality assurance agency. The CIPRS system not only guarantees
quality from the grower to the processor, it also provides traceability back
to the certified seed. "It basically opens up the system all the way back
to the grower, even back to the seed supplier," says Rivest, referring
to the certified tag, cleaning protocols and inspection demands that all come
with a third party audited trail.

GM still an issue
Despite more than 10 years of safe use, the GM issue continues to hamper the
efforts of the IP and food grade soybean sectors. With the growing percentage
of GM crops in the US (up to 85 percent in corn and 70 percent in soybeans),
as well as the introduction of white hilum Roundup Ready varieties, certified
assurances are vital.

Laura Anderson, manager of the CIPRS program with the CGC in Winnipeg, Manitoba,
agrees with Rivest that it has been a long process of first creating the system
and then working with IP participants to take that extra step. "What CSEA
is trying to do is encourage industry participants to adopt these good IP processes
required by the CIPRS program," she says. This standard helps to assure
customers against any type of catastrophic co-mingling of products within a
shipment, which would have huge implications on the reputation of the Canadian
IP soybean sector. "The chances of having that kind of breakdown are greater
than if you have everything documented on how you're going to guard against
it, that you have records, and that you've trained your staff and you have contingency
plans in place where things could go wrong."

Developing CIPRS was made easier by partnering with the Canadian Seed Institute,
which is one of the program's third-party auditors. "The CSI had the experience
in process verification, whereas, historically the Grain Commission has focussed
on produce verification," says Anderson. "While CIPRS is definitely
a traceability system, IP means you not only have to have that capability, you
also have to understand your customers' needs and develop the processes to meet
those needs."

That feeds into another issue that appears to be taking shape as 2007 progresses.
Higher corn prices for the ethanol industry are thought to be sparking a renaissance
in rural Canada. On one side, end users of corn will pay higher prices to secure
supplies, but so too, it is argued, will food processors: they may have to.
In that light, growers may find themselves benefiting from improved pricing,
but also realizing greater opportunities abroad by adding CIPRS to their operations.
-30-