Sorghum and sudangrass can surprise.

It is unlikely that sorghum will ever replace corn for silage or that sudangrass
will overtake alfalfa in the minds of livestock producers. But to Marv Eberle,
the two relative newcomers to the agricultural scene in eastern Canada are not
trying to replace silage or forage standards, as much as give producers another
set of viable alternatives in the race to cut costs and improve performance.

According to Eberle, vice-president of sales and product development with Country
Farm Seeds of Blenheim, Ontario, the word is out already concerning the two
crops, particularly in eastern Ontario. "In 2003, there were about 155
acres down there," he says, adding that his interest in the crops is outside
of his duties with Country Farm Seeds. "In 2004, there were about 9000
acres. Growers in eastern Ontario really liked the product and they're coming
back for more of it in 2005."

In fact, Eberle, who also farms near Glencoe, knows of one producer near him
who grew the forage sudan in 2004 and is seriously considering returning to
it for 2005. Another grower near Goderich also has expressed his satisfaction.

Combined effort offering alternatives
Eberle points to the efforts of Agriculture Environmental Renewal Canada (AERC),
a joint venture between the University of Guelph, University of Windsor, Agriculture
and Agri-Food Canada and the Ontario Ministry of Agriculture and Food, along
with ministries from other provinces. In all, AERC is attempting to bring a
number of different crop hybrids to Canadian growers, specifically bred to meet
growing and climate conditions in southwestern Ontario. And it is a market Eberle
is very interested in servicing.

From literature published by AERC, there are definite advantages to growing
forage sudan and silage sorghum.

The sorghum hybrid chosen by AERC, Canadian Silage Sorghum Hybrid (CHMSH 35)
has better drought tolerance because of its root structure, which tends to run
deeper than corn. This sorghum hybrid will go dormant like a grass instead of
dying out or losing significant yield in times of drought stress, and it requires
less fertilizer than conventional corn programs. Also, there is little need
for insect control and it can still be cut with a regular forage harvester.
Its nutritive value rivals corn silage with harvesting at dough stage, yielding
65 percent moisture. And in field trials in Ontario and Quebec in 2003, CHMSH
35 yielded 20 percent more forage dry matter than silage corn. Silage sorghum
hybrid CHMSH 35 was developed for a single cutting system for silage or green
chop. 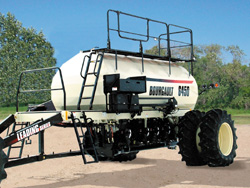 Results encourage continued testing
With the forage sudangrass, sold as Canadian Forage Sudan Hybrid 30, it is also
comparable to conventional forages, and can be underseeded with alfalfa or planted
as a cover crop. It is recommended for silage, green chop, balage, dry feed
or for pasture, with an excellent recovery capacity. According to feed tests,
CFSH 30 is very palatable and ideal for both dairy and beef nutritional programs,
boasting the potential for three cuttings during the season. Optimum harvest
is at three feet in height, 40 to 50 days and has a dry matter yield of six
to seven tonnes per hectare with a crude protein of 14 to 15 percent, which
fares better than corn silage protein levels of nine to 10 percent.

"Actually, the southwestern Ontario trials showed the best crude protein
levels among various sites in northwestern Ontario, Quebec and Saskatchewan,"
says Eberle, adding that field testing has been done for five years at Delhi,
in London for two years and for four years in Thunder Bay and Emo. "It's
a type of product that you want to seed after the ground is warmed up, from
May 25 to June 5 or when the soil temperature is 12 degrees C with no risk of
frost," says Eberle, noting that despite its later planting date, it is
still possible to get a third cut in the fall, depending on the growing season.
Hybrid 30 is frost sensitive and has safe prussic acid levels at all times.
"If you don't get a cut in the fall, and there's the possibility of putting
a fence around it, you can put your cattle out and graze it.

"There's a lot of promise with it."