While most other crops have research dollars devoted to improving yield, pest and herbicide resistance, and input management, sorghum has been left behind in the move towards genetic improvements, better management options and pest reduction. 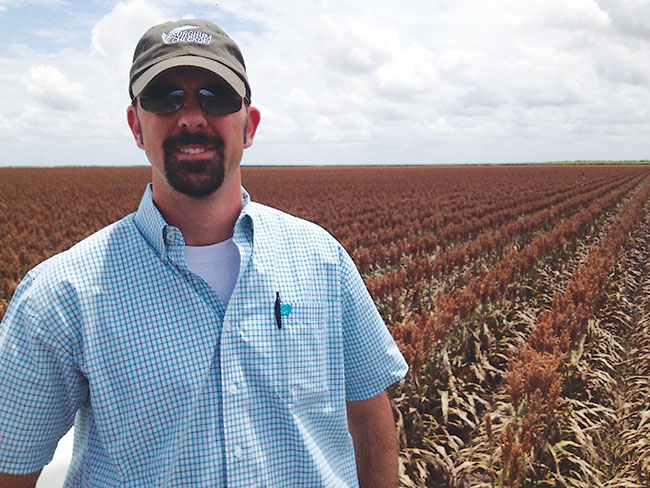 Justin Weinheimer is the crop improvement director for Sorghum: The Smart Choice While most other crops have research dollars devoted to improving yield

“There’s never enough supporting research for many grain crops, but sorghum gets the least amount of attention,” says Justin Weinheimer, the crop improvement director for Sorghum: The Smart Choice, a check-off program initiated by growers to fund research. The program, based in Texas, is investing in sorghum improvement and, as a result, the future is starting to look brighter for the former staple in crop rotations.

“Research shifted to corn and soybeans, which affected grain sorghum,” Weinheimer says. “Growers are now playing catch-up to get grain sorghum technology improved. Grain sorghum brings value to farms because it works well in rotation – especially winter wheat and legumes. It also provides organic matter to soil and helps to break up disease and pest cycles.” He adds that in the U.S., sorghum has been successful in wheat rotations as well.

The current issue facing sorghum growers, according to Weinheimer, is the lack of technology support; while other crops were being studied to develop new pesticides and herbicides, sorghum was not. Without the technology support, growers began to drop it from consideration in their cropping plans. With the help of the check-off program, Weinheimer and his colleagues are trying to address the crop improvement needs of sorghum.

A Canadian perspective
In Canada, Agriculture Environmental Renewal Canada (AERC) Inc. was formed to conduct sorghum research after federal, provincial and university funding for the crop dried up. “We do research in collaboration with government and universities,” explains Om Dangi, AERC’s president.

Sorghum works well in rotation with potatoes in sandy soils, making it a good option in areas of the country with high concentrations of potato production. They are also trying to determine if a popular corn herbicide could work with sorghum.

“Our breeding program is ongoing,” Dangi says. “We are always trying to improve the seed because it is wanted in China, East Africa and Vietnam.” Sorghum is a good alternative to corn, particularly in areas where corn can be more challenging to grow successfully.

Because many growers moved away from sorghum production for many years, it does not have the same pest and disease pressures that have been seen increasing in other crops that are grown repeatedly. Weinheimer says this is what makes sorghum so welcome in a rotation. However, as acreage in the U.S. has increased, so have the pest problems. Sorghum grown in wetter areas is subject to anthracnose and sugar cane aphid.

But, despite the challenges facing growers as they wait for sorghum breeding to catch up with corn and soybean programs, there are newer markets that make growing sorghum lucrative. According to Weinheimer, China currently buys almost 70 per cent of U.S. grain sorghum.

“We’ve seen a massive shift in where our grain sorghum is going and that has affected prices,” he says. “In some cases, it has been trading similar to corn, which is a big improvement.”

Here in Canada, Dangi says most domestically grown sorghum is used in the country, but he sees growing market opportunities. Growers just need to be given the right varieties and technology for success.

“Our hybrids are adapted to our climate,” Dangi says of his sorghum-breeding program. “We will continue our research because there looks to be more opportunities in the future.”

Weinheimer agrees, based on what he is seeing in the U.S. He maintains genetics is the greatest impediment to getting sorghum grown in more fields. From a high of 18 million acres seeded to sorghum in the States 30 years ago, to the seven million acres seeded in 2016, sorghum has a lot of catching up to do.

“Yield expectations need to catch up to other crops – we currently have a yield drag,” Weinheimer says. “We also need to address pest and disease problems. Sorghum has been grown more frequently in areas with drought pressure, but it could shift back to being grown on more productive land with the right support.” He adds that the check-off program, which started in 2008, has helped reboot public sector breeding and research programs. The check-off program acts as a hub to provide research dollars and help regain lost ground in sorghum research.

“If Canadian growers are interested in sorghum, the real value is to discuss opportunities in key growing areas,” Weinheimer says. “There are opportunities for it to be grown in northern areas with shorter growing seasons. We have seen acres increase in South Dakota, for example. The strength of sorghum is its diversity because it can be grown in many areas successfully.”

Both Weinheimer and Dangi say shifts in the way crops are bred in the 21st century will help sorghum breeding catch up. They say a lot of the guesswork of traditional breeding by natural selection has been removed from the process, making varietal improvements less costly.

“Sorghum is trending upward now, but there are still challenges,” Weinheimer says. “However, long term, we expect the sorghum story to improve.”

For Canadian producers looking for another option for their rotation, it might be time to consider this overlooked crop.