Features Agronomy Other Crops
How to fertilize forages for increased yields

Though often abused and neglected, mixed forage stands can respond to fertilization. Still, some growers are hesitant to apply fertilizer to meet fertility needs, perhaps because forage yields tend to decline over time or because lack of spring rainfall can limit yield responses. 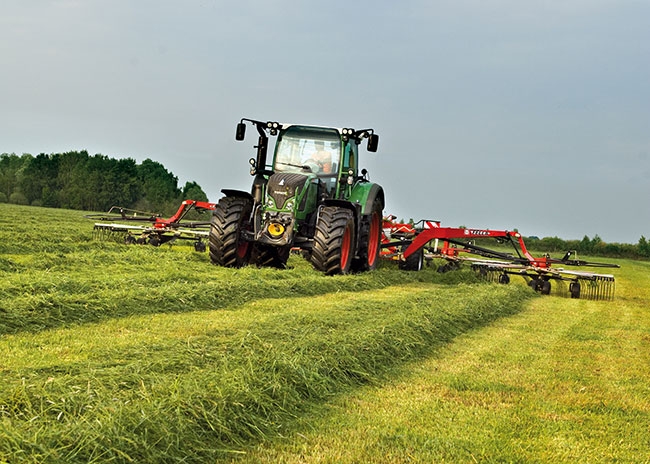 “In my opinion, farmers and ranchers are often missing out on potential increases in forage yields and increased net returns by not optimally fertilizing their forage crops,” says Tom Jensen, a director in the International Plant Nutrition Institute’s North American program, who works out of Calgary.

Soil test
Saskatchewan Agriculture’s provincial forage crop specialist, Terry Kowalchuk, says farmers should soil test in the late fall or early spring to get an understanding of the levels of nutrients in the field. He says care should be taken to ensure the samples are representative of the majority of the field (i.e. mid slope positions) and if there are noticeable differences in soil texture or management from one part of the field to another, they should be tested separately. Growers should sample at depths of zero to six and six to 24 inches. When soil testing, the percentage and species of legume in the stand should be indicated in order to obtain a more effective fertilizer recommendation.

“The shallower depth gives a good idea of nutrient levels (especially P and K) near the surface while the zero to six combined with the deeper depth increment will provide a sense of N and S levels at depth,” Kowalchuk says.

Nitrogen fertilizer
Jensen recently conducted a research trial on a ranch near Invermere, B.C., on a 50 per cent alfalfa and mixed grass stand where the ranch manager did not feel he was getting an economic return on applied fertilizer. The field was normally managed for a hay cut at the end of June, then allowed to regrow for grazing in the late summer and early fall. Applied fertilizer was 75 pounds per acre (lb/ac) of N, 60 lb/ac of P2O5, 100 lb/ac of K2O, 30 lb/ac of S, and one lb/ac of boron (B) for a total cost of $34.50 per acre.

Jensen reports the addition of fertilizer increased the yield to 4.5 tonnes per acre (t/ac) compared to 2.9 t/ac where no fertilizer was applied. Hay yield was increased by 1.6 t/ac and the local value of hay was $80 per tonne. The net return was $93.20 per acre, or $2.70 for every dollar invested in fertilizer – an excellent amount of realized profit, Jensen says.

Nitrogen fertilizer strategies depend on the proportion of legumes in the hay stand. Kowalchuk says N fertilizer will suppress N fixation since the plants and soil organisms will preferentially access the most readily available form of N. This typically means the rhizobium will reduce fixing nitrogen if fertilizer N is readily available.

“The age of the stand also makes a difference in how efficient alfalfa is at fixing nitrogen. Stands up to five years will fix about 70 to 80 per cent of their N requirements, but as the stand ages beyond five years, this can drop below 50 per cent,” Kowalchuk says. “So supplementation with N for older stands will provide a greater response and have less impact on N fixation than it will for younger stands.”

Generally, research has found that if a mixed stand contains more than 50 per cent legume in the stand, there will be little yield response to applied N fertilizer. Additionally, N fertilizer stimulates grass production, which can out-compete legumes in the stand and reduce the longevity of the alfalfa in the mixed forage stand.

Many years ago, Agriculture and Agri-Food Canada (AAFC) researcher Lorraine Bailey in Brandon, Man., developed guidelines for fertilizing mixed stands. If the forage stand has 75 per cent or more grass, it would be managed as a pure grass stand and the emphasis would be on N fertility. At more than 75 per cent legumes, the forage would be managed as a pure legume stand with an emphasis on P, K and S.

Kowalchuk adds that environmental conditions play a large role in how effective plants are at fixing their own N. Generally, if the soil test shows very low amounts of N, there is no harm in adding fertilizer to a stand with higher levels of legumes.

“The amount usually comes down to what a producer is willing to spend. In most cases P is more of a concern in mixed forage stands, and by adding monamonium phosphate fertilizer, you will also be adding some N into the system, although probably not enough to suppress fixation,” Kowalchuk says.

Hay crops will respond to a fertilizer program

Nitrogen source
Annual applications of N can be conducted with top-dressed urea (46-0-0) or dribble banding urea-ammonium-nitrate liquid N (UAN; 28-0-0). Both forms of N are subject to gaseous ammonia losses of N (volatilization) to the atmosphere if rain is not received within one or two days of application. UAN is less subject to volatilization since one-half of the N is in the ammonium nitrate form. However, UAN should only be applied as a dribble band because spray applications are much more vulnerable to loss due to increased contact with surface residues.

Urease inhibitors such as Agrotain can be used with urea and UAN; this can reduce volatile losses from the urea portion for up to 14 days or more. Research conducted in the early to mid-2000s by Rigas Karamanos, then with Western Co-op Fertilizers and now with Koch Agronomic Services, compared urea plus Agrotain versus ammonium nitrate fertilizer on a mixed bromegrass and alfalfa stand. Ammonium nitrate is not subject to volatilization losses, but is no longer available in Western Canada. The study across three nitrogen rates found there was no significant difference in yield between the two treatments, indicating that urea plus Agrotain is a suitable replacement for ammonia nitrate fertilizer.

ESN fertilizer from Agrium is another option that can be used to limit N losses. ESN is a controlled release fertilizer that releases over the growing season. Ray Dowbenko, an agronomist with Agrium in Calgary, says research has shown that spring broadcast application of only ESN is not recommended, as N-release is not fast enough for the forage crop’s immediate spring growth requirements. However, a spring application in a blend with urea or ammonium sulphate works well. The urea or ammonium sulphate supplies N to the first cut of hay and ESN supplies N for the second cut. An additional option is an early fall broadcast of ESN that will release soon enough to supply the spring N demand.

Ammonium sulphate is another N source in forage production, when economically available. Westco forage research in the foothills of Alberta found it to be equally effective as ammonium nitrate. Ammonium sulphate also has the additional benefit of supplying sulphur to the crop.

P, K and S recommendations
Recommendations for the addition of P, K and S should follow soil test guidelines. Information from Alberta Agriculture indicates
annual applications of P2O5 fertilizer is reasonably effective, and if P is limiting production, annual maintenance rates of 20 to 40 pounds P2O5 per acre will help meet crop removal needs. Broadcast application of P is effective. At Swift Current, Bailey reported alfalfa could produce a dense mat of fine root hairs near the soil surface, capable of utilizing surface-applied P.

“I like early spring for P fertilizer application. There is usually good moisture available and if the soils are cold, the added P can help boost early shoot development,” Kowalchuk says.

On fields testing deficient in K – a phenomenon most likely to occur on sandy soils – an application of 50 pounds K2O per acre may produce a yield response. However, leave check strips to help determine if K fertilizer application is beneficial.

Sulphur is mobile in the soil and can be subject to leaching, especially on sandy soils. Alfalfa has high sulfur needs, so ensure good sulphur fertility in mixed stands. Follow soil test recommendations for sulphur application rates. In addition to S, ammonium sulphate 20-0-0-(24) has a stable form of N that can also supplement the crop when broadcasting to forage crops. The sulphate is readily available in the year of application.

Depending on the soil test recommendation, Kowalchuk says producers may need to consult with their supplier to get a blend that is suitable for their particular stand. The response to fertilizer will depend largely on moisture and growing conditions after application.

Kowalchuk adds that if producers are unsure whether they want to use fertilizer for rejuvenation, they can try it on test strips to get a sense of what sort of yield response they might get relative to the cost.

Alternatively, they can look at direct seeding more legumes into their existing stand to boost production.

“No matter what method is chosen, if you get a dry summer like we [have experiened] in 2017, the chances of success are diminished,” Kowalchuk says.