Experts say the disease is increasing in severity every year.

It’s news to no one that sudden death syndrome (SDS) in soybeans is established in southern Ontario. According to new disease survey data, the disease is most severe in Chatham, Elgin, Norfolk and Essex counties, says Owen Wally, a plant pathologist with Agriculture and Agri-Food Canada.

But the disease continues to spread, increasing in severity every year, says Albert Tenuta, field crop pathologist for the Ontario Ministry of Agriculture, Food and Rural Affairs (OMAFRA), who worked with Wally on the survey.

“We’re starting to see it in Middlesex, North London and Perth as well,” he says. “Anywhere where you find soybean cyst nematode (SCN), you’ll find SDS as well, either immediately or soon after. That’s been a common feature with the spread of SCN – these diseases seem to go hand-in-hand.”

SDS is a soilborne fungal disease caused by Fusarium virguliforme. The pathogen can stay dormant in the soil for more than a decade, and once it’s in a field it’s nearly impossible to eradicate.

The fungus infects soybean roots and produces a toxin that translocates through the vascular tissue of the plant, eventually entering the leaves and causing characteristic interveinal chlorosis, or browning of the leaf tissue between the veins. Eventually the leaves yellow and die. In severe cases the disease can cause complete defoliation.

Wally says in bad fields, producers could be facing 30 per cent yield losses. In some parts of Elgin County, producers are looking for alternatives to soybean because the disease is so severe.

“Plants will go from looking good to just dying in a couple of weeks – especially when conditions are right. If we get a flush of rain through an area in late July to mid-August, that can exacerbate disease progression.”

Tenuta adds that the disease can be particularly frustrating for producers because it seems to affect fields with the highest fertility and yield potential – in other words, the best fields. These fields – which often boast otherwise healthy, productive soils – offer the perfect environment for the fungus to develop.

Predictors for SDS
Tenuta says the research community has invested a lot of time and resources investigating the connection between SDS and SCN.

One reason why the diseases so often go hand-in-hand, he says, is that the cysts on soybean roots caused by SCN are often colonized by F. virguliforme. The pathogen is one of a complex of Fusarium pathogens for root rot, and when the nematode “opens the door” into the root, it’s easier for fungal pathogens to enter and establish.

“You could almost say that SCN is a vector for SDS,” Tenuta says.

He adds that anywhere SCN is established, SDS is likely to follow.

Tenuta is part of an SDS consortium with researchers south of the border. He says their combined data shows other connections producers should be aware of. For example, SDS can be a problem in corn-soybean rotations. F. virguliforme is not a pathogen of corn, but it has adapted to the point where it can use corn as a substrate or food source to continue development in non-soybean years, says Tenuta.

“What that means is that, as corn is harvested and residues are left in the field – particularly corn roots, cobs, kernels – these act as a substrate for the SDS Fusarium to grow and to increase, even though you have a non-host in the field.”

SDS is prominent in the U.S. corn belt, where corn and soybeans are often grown in tight rotations, allowing the pathogen to adapt and survive on corn.

But the connection is no longer confined to the U.S.; research plots have shown the corn residues are a suitable host for SDS Fusarium in Ontario, too. 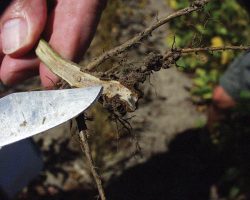 Management
Wally says the first step for managing SDS is correctly diagnosing the disease. Interveinal chlorosis caused by the disease can be misread as brown stem rot or stem canker. It also looks a little like potassium deficiency.

“When we get reports of suspected SDS from agronomists, usually it’s SDS only about half of the time,” he says.

Tenuta says producers should be alert to whether SCN levels are increasing or decreasing in their fields. Because of the positive relationship between the two diseases, if SCN is on the rise in a field, SDS will likely follow suit. Because the two diseases are so closely connected, the most important management technique for producers is to handle them together.

“Regardless of what disease we’re talking about, the cornerstone of management is genetics. In the case of integrated management for SDS, it starts with varieties that have good tolerance or resistance to SCN as well,” he concludes.

Early planting, when the soil is too wet or cold, can also favour the SDS pathogen. Producers can minimize risk by planting later, in drier conditions. This does not mean waiting until yield potential is compromised, but rather holding off a few days until the soil is fit for planting, Tenuta says.

In 2019, SDS was a major problem in the southwest, and this relates to planting conditions. “Many producers said the ground wasn’t quite fit when we planted. That falls squarely into SDS’ favour. Make sure the ground is fit to get in there as soon as possible but under good conditions.”

Tillage or strip-tillage can also help warm up the soil pre-plant.

Research has also shown that a three-crop rotation including a cereal such as wheat or oats can help mitigate the effects of SDS, Tenuta says, particularly because the pathogen has adapted to a corn-soy rotation.

But another approach is seed treatments. Two promising options are available with others on the horizon for Ontario producers. The first is ILeVO, a Group 7 BASF chemistry containing the active ingredient Fluopyram. ILeVO is proven to reduce SDS severity in Ontario, says Tenuta.

Syngenta’s Saltro, which contains the company’s new Adepidyn (pydiflumetofen) Group 7 chemistry, is also in the queue for registration in Canada.

No seed treatments can completely eliminate SDS, but they can help limit disease establishment. “These seed treatments delay the development of the disease and hence the disease severity and potential yield impact – and a delay of two or three weeks in August makes a big difference in seed fill and yield potential,” he says.