Heat tolerance is a complex trait that is vital for successful field pea production on the Prairies. Saskatchewan researchers are delving into this complexity and identifying some key characteristics to enable pea cultivars to reach their full yield potential despite hot spells.

“Every year we’re losing at least 25 per cent and sometimes 30, 40 or even 60 per cent of field pea yields due to combinations of drought and heat, depending on the year,” explains Dr. Rosalind Bueckert, a plant physiologist at the University of Saskatchewan.

“Most pea plants are very sensitive to air temperatures above 29 C; typically they drop their flowers and fail to form pods. [In Saskatchewan] in the time where pea plants are flowering and setting up their pods, we’re seeing at least two spells of warm weather above 29 C, where damage occurs.”

SPG’s director of research and development Dr. Jeff Parker says, “Any improvements in abiotic stresses – which are environmental stresses like heat, moisture and cold – always benefit the farmer by creating greater yield stability. That is a key part of all of the breeding programs that we fund through the University of Saskatchewan’s Crop Development Centre (CDC). In the short term, we look at how to manage these stresses through agronomic practices, but in the long term we want to increase robustness in the plant by understanding how these different traits, like the heat tolerance traits that Rosalind’s study is looking at, can be modified to produce better, more resilient varieties.”

Although certain agronomic practices may help somewhat, Parker believes genetic improvement is essential to dealing with heat stress in field pea. “If your area tends to have a very hot period at a certain time each summer – and we all know that varies a fair bit from year to year – you may be able to shift the planting date a little later or a little earlier so the crop isn’t flowering during that hot period. And you may be able to play with seeding and canopy density to allow more air movement. But there is not a lot that you can do with management practices to deal with heat stress in my opinion,” he says.

One of the challenges in breeding heat-tolerant pea cultivars is that a wide range of traits could play at least some role in how the plants respond to hot weather. Parker gives some examples: “The amount of vining and amount of leaf in the pea canopy – from fully leafed to completely leafless – affect air movement through the canopy and temperatures in the canopy. The leaf’s shape, the amount of wax on it and how quickly it closes its stomata for oxygen and carbon dioxide exchange, all influence heat tolerance. Those characteristics are all part of different genetics and different types of pea plants. As well, there are differences between cultivars in the ability to withstand flower and pollen abortion during high temperatures.

“Because there is this complexity of traits, we need to determine which specific traits the breeders should tackle first, which ones would give us the best results,” adds Parker. And that’s where Bueckert’s project comes in.

Her interest in heat tolerance in field pea was sparked when certain varieties, like CDC Sage, didn’t perform as well as expected in farmers’ fields. Dr. Tom Warkentin, CDC’s pea breeder, wondered if heat stress might be an issue in some of these varieties.

“We started the research by looking at exactly what the commonly grown varieties do in a normal year and when they might be seeded a little late. We seeded a whole set late because that tends to guarantee flowering in a much warmer stretch of weather,” says Bueckert.

This initial field work involved evaluating heat tolerance in 12 current pea cultivars at three sites in Saskatchewan. Those trials confirmed that heat stress is indeed a concern for some pea varieties. Not surprisingly, yield losses were greater in the late-seeded plots.

The next stage in Bueckert’s project was to identify plant characteristics affecting heat tolerance in field pea. To do that, Bueckert and her research team made use of Warkentin’s collection of 94 pea varieties. This collection is composed of pea varieties from around the world that can produce a crop under Saskatchewan conditions. The researchers grew the 94 varieties in field plots in Saskatchewan and in Arizona.

“When we put those 94 varieties out in Arizona under very high temperatures up to 40 C, we found that some of them can quite happily still set flowers and set pods at those temperatures,” notes Bueckert. The ability of some varieties to tolerate such high temperatures seems to be influenced by several characteristics.

Most importantly, many of the heat-tolerant varieties have two characteristics: early flowering and flowering for a long period. That combination is really valuable for withstanding hot spells. For example, Bueckert explains that the heat-sensitive CDC Sage tends to flower a little later, so it’s at greater risk of encountering a warm spell during flowering and pod formation. As well, CDC Sage flowers for only about two to two and a half weeks, so if there is a warm spell during that period, the plants don’t have much opportunity to recover and make more flowers. In contrast, some of the more heat-tolerant varieties flower for about four or five weeks, so if they encounter a few days of heat stress, they have much more time to recover.

Another factor that helps some varieties to tolerate hot conditions relates to the plants’ ability to cool themselves. Bueckert notes that the Arizona pea plots were flood irrigated, so the plants were subjected to high temperatures but not drought stress. “When plants use water, they transpire and they actually cool themselves. And so there is a whole facet associated with the cooling of the pea canopy, so it can keep itself cooler than the air temperature.” Her field trial results suggest that characteristics like canopy density and leaf size, shape, colour, waxiness and cuticle thickness could be important.

According to Bueckert, the first priority for improving heat tolerance in field pea varieties is to address the flowering patterns. “Around the world, anyone who has improved heat tolerance in a crop has changed the flowering pattern to either outlive the heat stress or to flower before the main stretch of heat comes. So that is probably the most practical thing we could do,” she says.

Furthermore, Prairie breeding material with the desired flowering characteristics is already available. “For example, CDC Golden, CDC Centennial and CDC Meadow tend to flower early and for a long period of time. Compared to CDC Sage, they flower five days earlier and they flower for several weeks longer,” says Bueckert. “Fixing the flowering date and the length of flowering is very doable, and will go a long way to making our pea varieties more yield stable.”

Bueckert’s research team is now working on some further studies related to flowering and pod formation. “Currently we’re trying to see if we can improve the number of flowers that actually produce pea pods at a moderate heat stress, when you have just a few days above 30 C.” For example, the researchers have done some preliminary growth chamber work with six pea varieties to better understand how heat stress decreases pollen viability. A PhD student will be investigating this aspect in greater detail.

In addition, CDC chickpea breeder Dr. Bunyamin Tar’an has recently joined the research team for this project. His expertise will enable the project’s results on heat tolerance traits to be added to CDC’s work on pea genomics. Genomics is the study of an organism’s entire DNA. Genomics information can help to advance breeding programs, for example, through development of DNA-based tools to quickly screen breeding material for specific traits. “We’re layering our research on what’s already being done [at CDC] to give growers the best value for their research dollars,” explains Bueckert.

As well, if able to obtain additional funding, Bueckert would like to explore plant characteristics affecting water use and drought tolerance to get a better understanding of their relationship to heat tolerance.

Bueckert is enthusiastic about her project: “It’s a very interesting and very complicated topic. We’re progressing much faster than I expected, and we hope to be able to offer at least a trait for heat tolerance in pollen within the next two years.” 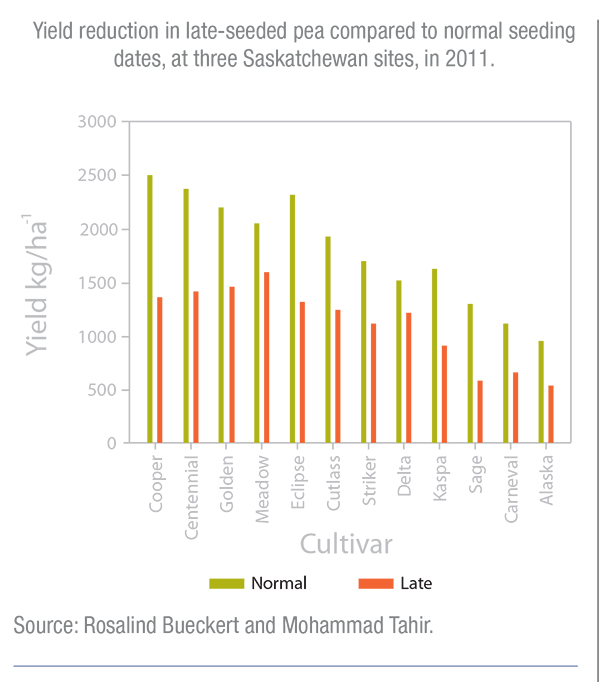 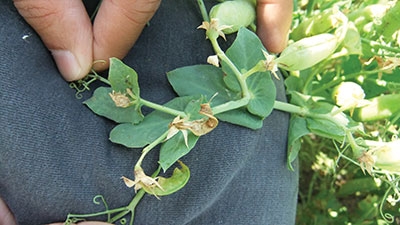 Heat stress causes field pea plants to drop their flowers and renders them unable to form pods. Heat tolerance is a complex trait that is vital for successful field pea production on the Prairies.