Over the last five years, researchers at Alberta Agriculture and Rural Development (ARD) conducted field trials to assess the viability of winter pea and lentil in Alberta. Three years of trials started in 2008 and provided insight into where winter pulses were viable and also allowed researchers to develop agronomic recommendations. Plots were seeded in Lethbridge, Brooks, Bow Island, High River, Lacombe and Edmonton in 2008 through 2011, and a fourth year of trials were seeded at Brooks, Bow Island, Lethbridge and High River.

“There is potential for winter pea and lentil in southern Alberta, but a couple things are holding back the adoption,” says Mark Olson, unit head-pulse crops with ARD’s crop research and extension division in Stony Plain. “Pea crops have to be higher paying to get into the rotation under irrigation and we need better varieties that are more adapted to Alberta conditions.”

Winter fababeans are not a good option as they did not overwinter or perform very well in any of the locations. Better varieties are needed for Alberta conditions.

Varieties and seeding rates
The winter pea and winter lentil varieties used in the trials are from USDA germplasm and work done by Dr. Kevin McPhee, a researcher formerly at Pullman, Wash., and now at North Dakota State University. The winter pea varieties that survived in southern Alberta were Specter and Windham. Specter is a small seeded, yellow pea and is semi-leafless and tall (100 cm vine length). Windham is a semi-leafless yellow pea, but shorter than Spectrum and with a small seed.

For winter pea, the research found a seeding rate of 75 plants per square metre provided optimum yields – the same rate as spring pea. Seeding is generally recommended for the first two weeks of September.

“Seeding winter pea is a little more difficult than winter wheat. Pea seed is larger and it definitely has to be sown into moist ground,” says Olson.

The winter lentil variety chosen as the best for southern Alberta winters was Morton, developed at Washington State University by Drs. Fred Muehlbauer and Kevin McPhee. Morton grows about 31 cm tall, and is a small seeded variety with a beige seed coat and a red cotyledon. When seeded in the second and third weeks of September, seeding rate is 110 plants per square metre – the same rate as spring lentil.

Winter lentil showed similar trends as winter pea. Based on the research, fields with less than 60 plants per square metre (55 per cent survivability) should be re-seeded to another crop.

Where to now?
At Lethbridge, the Farming Smarter applied research farm also conducted research on winter pulses. Farming Smarter managed their own set of trials looking at slightly different agronomic practices only at the Lethbridge location. They conducted a variety trial, herbicide trial, and a seeding date and depth trial along with a pea leaf weevil trial. Subsequently in 2012, 10 acres of Windham winter pea was grown on a dryland piece of the applied research farm. Ken Coles, general manager, says they achieved reasonable yield but harvestability was a bit of a problem, and they should have swathed the winter pea instead of straight cutting it.

At NDSU, Kevin McPhee continues to work on improved winter pea with a lesser effort on winter lentil. He has encountered some disease limitations that are unrelated to the winter trait.

“We have had survival in most years at varying levels. I have learned a lot about the environment here and still have hope that we can make progress improving winter hardiness in peas, especially,” says McPhee.

While research funding is no longer available in Alberta, Coles is continuing with small plots to increase seed supply. “We don’t want to give it up. A lot of people are still interested in the idea of winter pulses. We just need better varieties.” 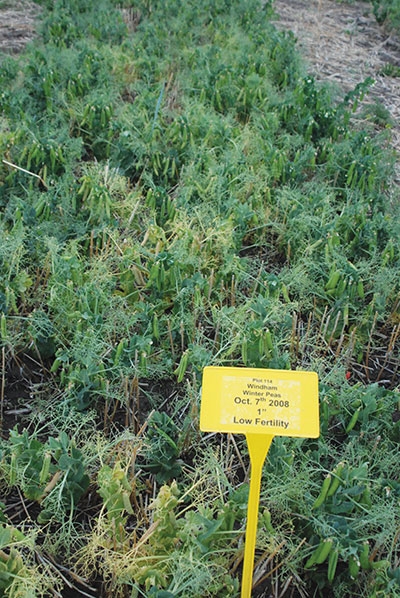 Improved varieties are required before winter pea will catch on. Over the last five years