A Manitoba study shows N2O emissions depend on fall moisture. 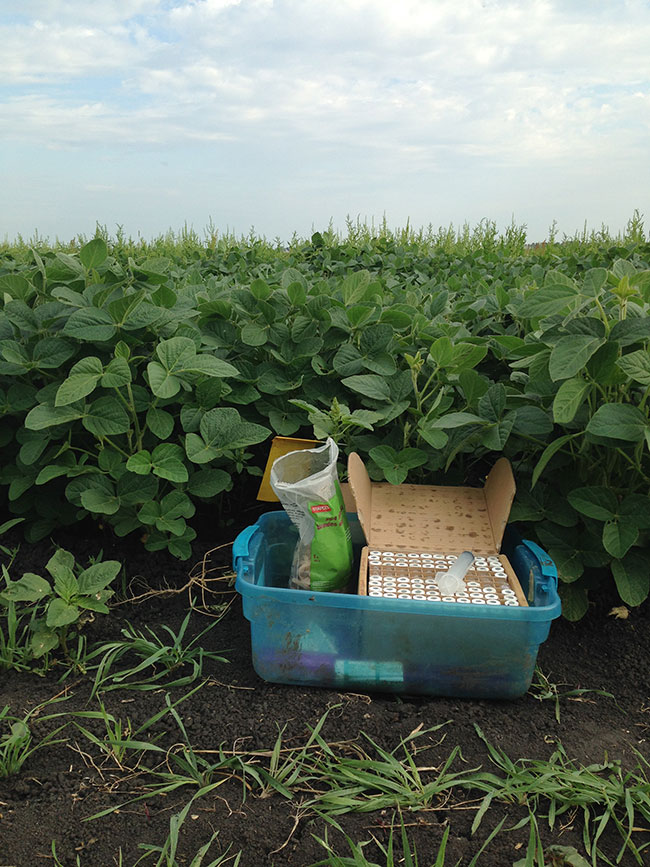 A study out of University of Manitoba’s department of soil science suggests that nitrous oxide (N2O) greenhouse gas (GHG) emissions increase in organic systems following wet fall conditions – and can even exceed those of conventional cropping systems treated with urea.

Nitrous oxide is 300 times more potent than carbon dioxide. Though N2O is naturally emitted from the soil, the process speeds up when applications of chemical fertilizers exceed demand.

Many studies looking at N2O emissions from organic systems have been conducted in the United States and Europe, says Megan Westphal, who completed the study as part of her master’s work at the University of Manitoba – but none had been conducted in the Prairies’ colder cropping environment.

“We wanted to see what happens in a climate with a longer and colder winter season and a shorter growing season,” says Westphal, who now works as a soil survey specialist with Manitoba Agriculture.

Mario Tenuta, a professor of applied soil ecology at the University of Manitoba, was Westphal’s supervisor on the study.

“One of the main focuses of the laboratory is to develop methods or farming practices to reduce our impact on the environment, particularly looking at reducing greenhouse gas emissions from agriculture,” Tenuta says.

“It’s pretty ingrained in the literature that organic plots reduce N2O emissions compared to conventional. But when I was looking at the literature I wasn’t sure why people are so confident about that. There were a handful of studies that were inconclusive. They were more southerly and decomposition and moisture regimes were quite different,” he says.

The study was a first for Manitoba’s cold environment, and its results will come as a surprise to organic producers in the province. But it also adds to researchers’ understanding about how soil cycling works in northern climates – and what to do about it. 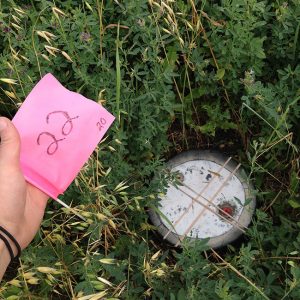 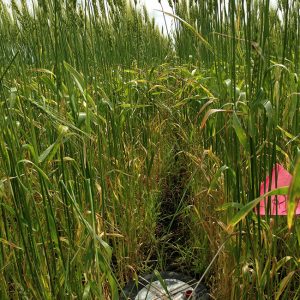 The static vented chamber in front of organic wheat, used to account for soil variability.

Study design and results
Westphal ran the study between 2014 and 2015 on the long-term organic-conventional side-by-side plots at Glenlea Research Station in southern Manitoba. The long-term trial compares annual and perennial rotations under organic and conventional management. In the conventional annual grains rotation, Westphal looked at N2O emissions from spring wheat and soybeans; in the organic perennial-annual rotation, N2O was measured from spring wheat and two-cut harvest with late summer or early fall ploughdown alfalfa.

Westphal installed round, static vented chambers made of PVC pipe at four locations in each plot in order to account for soil
variability. During sampling rounds, the researchers would bring lids to seal each gas chamber and take samples at zero, 15, 30 and 45 minutes. “That created a concentration gradient which we could see in the chamber, which allowed us to determine the daily flux of N2O in the soil,” Westphal explains.

The first year of the study was a dry year with a dry spring, while the following year was wet with a wet spring, Westphal says.

“We found that in a dry fall and a dry spring, when the snowmelt occurred quickly, there were little to no N2O emissions from the ploughdown in the fall and the spring and during the growing season of the following crop,” she says. “However, the following year it was wetter in the fall followed by a wetter spring with a slower melt, and there ended up being a lot more N2O emissions.”

The emissions were equal to or greater, in fact, than those from the conventional plots. This was surprising, Westphal says, due to the fact that most of the literature supported lower emissions from organic systems. (Cumulative emissions were not found to be statistically different.)

The reasons have to do with natural soil cycling processes in a northern climate.

“What we saw here was that the moisture increased the decomposition of the alfalfa and there was mineralization that was nitrified over the fall, was present over the winter, and was there in the thaw period the following year, when high moisture resulted in denitrification, and boom-presto we had more N2O under the organic system,” Tenuta explains.

Westphal says N2O emissions from ploughdown alfalfa are highly variable and dependent on soil moisture content for that organic matter to be mineralized and transformed into ammonium or nitrate and lost as N2O. In a drier situation, she says, that mineralization doesn’t occur or occurs really slowly.

Martin Entz, a professor of cropping systems and natural systems agriculture and an author on the study, heads the long-term trial at Glenlea.

He cautions against concluding that organic systems produce more N2O than conventional systems.

“What it does show is that alfalfa – because it puts such a large pulse of N into the soil – has the potential to release a lot of nitrous oxide. We also have a conventional alfalfa plot in the study, but Megan did not measure this one.”

In other words, it’s possible that the conventional alfalfa produced as much N2O as the organic alfalfa.

Producers are not out of options when it comes to managing N2O emissions after fall moisture. Tenuta says a possible solution is to put a non-leguminous cover crop in following ploughdown to take up excess nitrogen and water in the spring and reduce N2O emissions.

No robust system exists in Canada yet for producers to capitalize on carbon capture and reduction of GHG emissions, but if such a system were to be enforced in Canada, Tenuta says organic producers could take steps to minimize N2O emissions following fall moisture to protect their ability to gain carbon credits.

“We have a pretty good idea of what’s going on,” Tenuta says. “Now, we should be thinking about ways to reduce N2O emissions. That’s what I find intriguing.”