Irrigated faba bean and corn intercrop may be a viable strategy, but dryland benefits are limited. 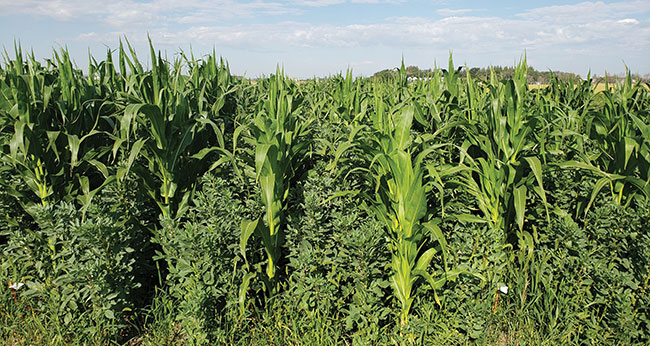 In an effort to capture the ears of silage corn growers in Saskatchewan, the Irrigation Crop Diversification Corporation (ICDC) in Outlook conducted a demonstration project to see if intercropping corn and faba bean under irrigation or dryland conditions could produce high energy, protein and yield compared to mono-crop corn.

“It was hoped that yields of the intercrop will be similar to those of corn as a monocrop, but the result will be a more balanced forage with appropriate levels of energy and protein,” says Garry Hnatowich, research director with ICDC. “Faba bean is a long season crop and is expected to mature at a similar date as corn facilitating harvest when both crops are at an ideal stage for silaging.”

The corn-faba bean intercrop demonstration was established on June 2, 2020, at the ICDC location in Outlook for the irrigated site, and on May 22, 2020, at Wheatland Conservation Area in Swift Current as the dryland site. The trials were replicated four times at Outlook and three times at Swift Current.

At Outlook, the corn monocrop was direct seeded into wheat stubble with 30-inch (76.2-cm) row spacing. The faba bean monocrop and corn-faba bean intercrop were also direct seeded into wheat stubble on 10-inch (25.4-cm) row spacing. For the intercrop, the corn was seeded on 30-inch rows, with the faba bean seeded on 10-inch row spacing between the corn rows. This resulted in a seeding pattern of one row of corn – two rows of faba beans – one row of corn.

At Outlook, there were 2,156 cumulative Corn Heat Units (CHUs) from May to August. Hail and extremely high winds caused damage to corn plants on Aug. 27, 2020 and a killing frost terminated the trial on Sept. 8, 2020. Total in-season precipitation and irrigation was 11 inches (279 mm). Swift Current received 2,081 CHUs from May to August and total in-season precipitation of 6.1 inches (154.9 mm).

“Corn plants were shorter when less than 160 kg N/ha was applied. This suggests that corn yield was reduced in most intercropped treatments but the faba bean contributed enough yield that there were no significant yield differences between the corn monocrop and the 0N, 40N, 80N, or 120N ontercrop treatments,” Hnatowich says.

The 120N and 160N intercrop treatments had a higher protein content than the corn monocrop, but they had less TDN, so overall forage quality was not superior. Otherwise, there were no major differences in forage quality between treatments.

A basic economic analysis was conducted to provide a relative overview each treatment at the irrigated Outlook site. Wet yield, estimated silage price, gross revenue, and net revenue were calculated. The 120N intercrop treatment had a net revenue of $636.52 per acre ($258/ha) and the 160N intercrop netted $652.12 per acre ($264/ha). These were more profitable than the 160N monocrop corn treatment at $571.49 ($231/ha).

Some components of forage quality including crude protein and macrominerals were higher in the faba bean monocrop, but generally, treatment differences were small and variable.

Based on the demonstration, a faba bean corn intercrop under irrigation has good potential when fertilized with higher rates of nitrogen, but the benefit of an intercrop may not be there for dryland silage corn growers.