Features Agronomy Other Crops
Dollars and sense of field shelterbelts

Is it worth it to plant a shelterbelt to improve crop yields? Past studies say “yes” – field shelterbelts make economic sense. Now a new study hopes to work with farmers on the Canadian Prairies and the U.S. Great Plains to check that shelterbelts are still economically viable in today’s farming systems.

Rows of trees, called shelterbelts or windbreaks, have been part of Prairie landscapes for generations. In cropland, their main purpose is to create a sheltered zone with conditions that enhance crop yields.

Shelterbelts reduce wind speed for a distance of about 10 to 20 times the shelterbelt’s height (H), with the greatest protection within about 5 or 6H of the shelterbelt. The sheltered zone has less wind damage to crops and less wind erosion than in an open field. It’s also usually warmer and moister, due to more snow trapping and less evaporation. On average, the area extending from about 1H to 15H distance from the centre of shelterbelt has improved crop yields because of the enhanced growing conditions.

In the 1H to 15H zone, “the shelterbelt can increase crop yields by 10 per cent, 20 per cent or more in some cases,” says Toso Bozic, agroforester/bioenergy specialist with Alberta Agriculture and Rural Development. “For a mature shelterbelt, the yield increases more than compensate for the yield losses due to the land taken out of production where the shelterbelt is planted and to competition with the crop right next to the shelterbelt.”

Exact costs and benefits of an individual shelterbelt are affected by a long list of factors, such as how many rows are in the shelterbelt, which tree and shrub species are in it, how far apart the trees and shrubs are, how much it costs to plant and maintain the shelterbelt, how old the shelterbelt is, which crops are grown in the sheltered field, what their average yields are in an open field, how responsive they are to additional moisture, what weather conditions occur during the shelterbelt’s lifespan, and so on.

“For example, the cost of a tree or shrub seedling can range from 25 cents to $3, depending on what you want, and the planting costs can vary depending on whether you plant the trees yourself or hire professional tree planters,” notes Bozic.

“You’ll likely see a better return from a shelterbelt if you’re growing high-value, high-yielding crops. And shelterbelts usually tend to have a greater yield benefit in the drier parts of the Prairies than in cooler, wetter areas. For instance in the Peace Region, a shelterbelt might reduce crop yields in some years if snow is kept on the field so long that seeding is delayed. But it’s also true that some parts of the Peace Region have soil erosion problems in dry years; even where farmers are using zero till, they are worried about topsoil loss.”

Calculating costs and benefits
If you’re interested in predicting the economics for a field shelterbelt on your land, a free computer program called WBECON (WindBreak ECONomics) is available through the Agriculture and Agri-Food Canada (AAFC) website. This model was developed by Dr. John Kort from AAFC’s Agroforestry Development Centre and Dr. James Brandle from the University of Nebraska–Lincoln. They brought together a large body of data from many multi-year shelterbelt studies in the Prairies, the Great Plains of the United States and other countries as the foundation for the model, as well as information on things like growth rates for different tree and shrub species.

WBECON asks the user to enter information about the following: soil texture, moisture and prevailing wind; crop rotation, production costs, crop prices and expected yield without shelter; field size; and shelterbelt species, placement and number. Crop yield is the only benefit considered. You can try different scenarios to see how various choices for things like crop type and tree species would affect the economics.

The costs and benefits change significantly over a shelterbelt’s lifespan. “There are upfront establishment costs for planting, weed control and so on, most of which are in about the first five years of the shelterbelt,” explains Kort. “Then it may take 10 or more years, depending on the shelterbelt species, for the shelterbelt to reach a reasonable size to start giving protective benefits.”

But those protective benefits can last a very long time. “Again depending on the species, a shelterbelt may last 70 or 80 years. We have a lot of examples on the Prairies of shelterbelts planted in the 1930s that are still out there. In southern Manitoba’s Red River Valley, some shelterbelts date back to the 1910s and 1920s, and they are still pretty good shelterbelts,” says Kort, who adds the data show that, on average, shelterbelts are a good investment. “When the shelterbelt is mature, it works out to be a positive net benefit, on a year-by-year basis. Also over the shelterbelt’s lifespan, you end up with a positive net present value.”

Producers who are thinking about planting a shelterbelt in 2014 should be aware that AAFC’s long-running Prairie Shelterbelt Program is being discontinued in 2013. Since 1901, the federal government  provided free tree and shrub seedlings to landowners from its tree nursery at Indian Head, Sask. The government is currently in discussions with groups interested in taking over the program.

Updating the economics
Much of our basic understanding of field shelterbelt economics comes from studies conducted more than 20 years ago. “From the time when the majority of the data was collected, quite a few things have changed in the agricultural production systems,” notes Richard Straight, technology transfer lead with the National Agroforestry Center of the United States Department of Agriculture (USDA).

“So our question is: is our understanding of the windbreak-and-crop relations still valid in light of all these changes? Is this still an economically viable practice for crop producers to apply on their land?”

When Straight and others took that question to the agroforestry community in the U.S. Great Plains and the Prairies, they found a lot of interest. As a result, researchers, extension agents and others in many states have come together in a multi-agency initiative. Kort and Bozic are considering how they can help their U.S. colleagues in this project.

The research team hopes to collect crop yield data over multiple years in relation to shelterbelts across the Great Plains states and the Prairie provinces. However, it would be a monumental task to conduct plot studies to cover all the different combinations of crops, climate, farming practices and so on for fields with and without windbreaks over such a large area. So the team hopes to partner with interested farmers.

“We realized a lot of the data was already out there with the farmers, with the yield monitors on their combines. If we could find a way to get enough of that data over a large enough area, then many of the problems that arise with setting up plot-type studies – like variations in weather patterns, soils and so forth – could be washed out just by the volume of data,” says Ray Stoner, a forester with the USDA’s Natural Resources Conservation Service. “If we can get just a handful of landowners to participate, for example one per county in the United States, that would be a huge amount of data, especially if the landowners have several years of data.”

Stoner emphasizes that farmer participation is strictly voluntary and that the data for individual farms will be kept anonymous.

This year, the team is conducting a pilot study, working with one or two landowners per state and province. “With this pilot, we hope to answer two categories of questions,” explains Straight. “One is: have we designed the data collection process so it’s simple, easy to understand, and gives us the information we need? The other is: how many different fields and years of data do we need to have a statistically valid set of information, so we can say with some level of confidence that this is our understanding of the windbreak-and-crop interaction?”

If the pilot goes well, the researchers will start a full study to gradually build a comprehensive dataset. Initially, they want to be able to draw a general conclusion as to whether shelterbelts have a positive, neutral or negative influence on crop yields. Then, as they collect more and more data, they hope to be able to predict yield responses for specific crops under specific soil and climate conditions.

“We certainly anticipate that we’ll find windbreaks are having a positive effect, but however it turns out, we’ll share that with the farmers,” notes Stoner.

In his earlier research, Kort examined in detail the data from past studies on yield response to shelterbelts, and he says, “Some of the data could be updated, but the basic data is still good.”

For example, he speculates that the shift from conventional to zero tillage might mean that a shelterbelt’s role in trapping snow or reducing wind erosion may not be as large under zero till, because the standing stubble on zero till land is also performing those functions. Nevertheless, he says, “The main crop response to a shelterbelt is due to the growing-year shelter. So effects like less wind damage and more heat in the sheltered area will be there regardless of how you’re growing the crop.”

Kort also notes WBECON was designed to be very flexible so that it won’t go out of date. For instance, because the users input their own crop prices and production costs, that information will always be up to date.

Additional benefits
Bozic notes that shelterbelt benefits to crop producers go beyond the improved yields from enhanced moisture and temperature conditions. For example, shelterbelts help increase yields by reducing soil erosion, and by providing habitat for native pollinators of crops and natural enemies of crop pests. As well, he says shelterbelts can enhance the real estate value of agricultural land, and once a shelterbelt reaches the end of its lifespan, the wood could be sold for wood chips or other uses.

In addition to the benefits to farmers, shelterbelts generate positive economic effects for everyone. To evaluate such economic effects, Kort worked with Dr. Surendra Kulshreshtha, an economist from the University of Saskatchewan. They studied the economic benefits to society from the tree seedlings distributed by AAFC’s Shelterbelt Centre at Indian Head from 1981 to 2001. They estimated the economic value of such benefits as increased carbon storage, reduced wind erosion, improved air and water quality, and conserved biodiversity to be over $140 million. They also identified various other benefits, like health values and transportation safety, but could not estimate their economic value due to a lack of data.

Bottom line
“In the long run the yield benefits from shelterbelts outweigh the costs. But the challenge is that you may have to wait 30 or more years to break even, which discourages many farmers,” says Bozic. “So my advice is to plant shelterbelts for more than just the direct yield benefits. Plant them for benefits like protecting your topsoil and increasing biodiversity to create better conditions for crop production.”

He adds, “When I have shelterbelt workshops with people who are 60 or 80 years old, I tell them, ‘You’ll do all this work to establish and maintain your shelterbelts, and you may not see the economic benefits. But your kids and grandkids will be thankful to you.’ Planting trees is a legacy to the next generation.” 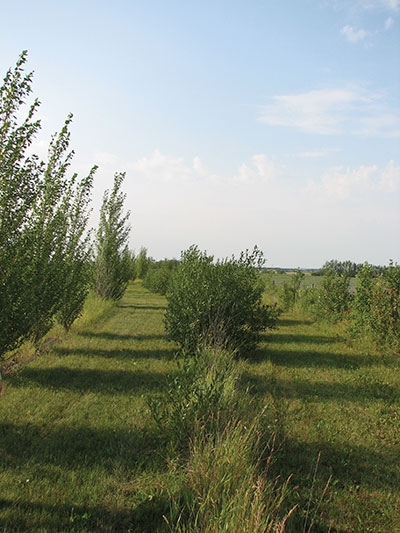