Polycultures or mixed plantings using a diverse range of plant species have been shown to improve productivity, increase soil organic matter, and reduce weed, insect and disease pressure. Polycultures have been used extensively in many areas as cover crops and for forage production. Researchers and producers in the semi-arid Prairies were interested to find out if polycultures had a fit in the drier regions of the Prairies.

Researchers at Agriculture and Agri-Food Canada (AAFC) in Swift Current, Sask., initiated a three-year project in 2013 to evaluate polycultures or cocktail mixes of annual forage plant species in the semi-arid regions. “This was a producer-driven question, with an orientation towards forages,” explains Dr. Mike Schellenberg, research scientist, and range and forage plant ecologist. “We want to determine if this system that is being used extensively in other areas is transferrable to the more arid regions such as southwestern Saskatchewan and southeastern Alberta. It’s a start on a question that will have larger advantages down the road, possibly including increased crop flexibility and productivity, and decreased erosion.”

Similar research has been done in other geographic areas including a recent project underway in North Dakota, and anecdotal evidence provided from the northern U.S. and a few locations in Canada. There is evidence that these mixtures could improve yield, amount of soil organic matter, moisture retention, and weed and insect control.

“Our research project, which is focused on several annual species for forage production, is trying to answer some of these questions,” says Schellenberg. “We are using the plantings in a forage system and taking the crop off as green feed, which is different than growing for grain production. We have selected 12 species that are divided into four groups, with each group providing different functions within the mixtures. The four groups of annual species include legumes, warm- and cool-season grasses, and brassicas. The species selected are already adapted to and grown in this area, so we don’t have to look at trying to adapt new species into these systems.”

The legume group includes hairy vetch, forage pea and field pea, which are expected to provide nitrogen inputs into the system. Three cool-season grasses include triticale, barley and oats, and three warm-season grasses selected are corn, sorghum and millet. A brassica group that includes forage radish, purple top turnip and kale, which are deeper “root” crops, is expected to be able to make other nutrients besides nitrogen (N), such as trace elements, more available to the system. The root crops are left to die and rot in the soil, improving infiltration and breaking up hardpan or compacted soils.

“In our trials, we are evaluating these four groups in various mixtures and comparing to control plots,” says Schellenberg. “We are growing all 12 species as monocultures and then mixtures of two, four, eight and 12 species. One of the objectives is to determine if all 12 species are required to achieve the benefits, or do you just need one of each functional group or two, for example, as an optimal cocktail mix.” The control treatments include one plot with all 12 species in year one, followed by barley in year two and the 12 species mix in year three. A second plot has barley in year one, followed by the 12 species mix in year two and barley in year three. “We have also planted control plots of perennial species, a two-species mixture of meadow brome and alfalfa to compare to the annual mixes. My other research work with perennials shows that if we have the right species, a more diverse stand does show an increase in productivity over a monoculture perennial forage crop.”

The plots were direct seeded using a plot disc seeder in early June.  The disc seeder was selected because it provides the least amount of soil disturbance. Schellenberg notes that previous studies in the semiarid regions show that if soil disturbance is minimized, then the moisture can be retained, which is important since the mixtures are being seeded later than most other crops. “We seeded all of the species at the same rate of 100 live seeds per metre to keep the comparisons more even. We know that is a bit high for corn, for example, but wanted to remove the seeding rate as a variable from the study.”

The first forage samples were cut in mid-July and the final samples cut at the end of August to determine the forage quality. An evaluation of the nutritional package of these combinations of annual forages is also being completed. Soil quality information and water stable aggregates are being measured to assess changes in productivity.

Preliminary observations are promising, with some of the plots providing much better cover than others. “The plots with more cover have reduced the number of weeds in the plots and therefore eliminated the need for chemical weed control,” says Schellenberg. “This could be a big benefit for low-input and organic producers who are looking for good weed control options. We are also seeing that some monoculture plots are providing ‘fine dining’ for insects, while the mixtures are making it difficult for insects to find their choice plant, providing some promise for insect control as well.”

Based on the first year, researchers are considering adding some additional seeding experiments to the project. In the first year in the 12-species mixtures, the smaller seeded crops such as sorghum or kale appeared in low numbers within the row. For next spring, researchers are considering placing the larger seeded crops in the main seed box of the planter and putting the smaller seeded crops through the fertilizer box, then placing them in between the rows, to see if it will improve establishment.

“The project has created a fair amount of interest from producers, and so far in 2013 we have had three field tours,” says Schellenberg. “We plan to continue with field days and field tours in 2014, so producers who are interested can watch for more information. We will also be making the research results available as they are ready. We want to see the impact three years in a row to determine additive effects on soil nutrition and which combination is having the best effect with the least input.” Project collaborators include Jillian Bainard, post doc and project manager at AAFC Swift Current, Eric Lamb, University of Saskatchewan, Reynald Lemke, AAFC Saskatoon and Herb Cutforth, AAFC Swift Current. 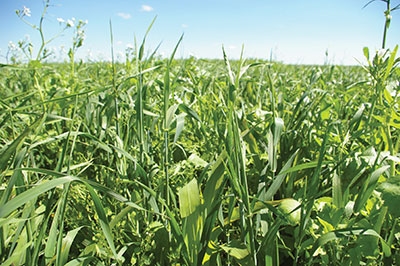 Polyculture or annual forage cocktail mixtures research plots Polycultures have been used extensively in many areas as cover crops and for forage production.