After the Prairie Farm Rehabilitation Centre kicked off its shelterbelt program in 1903, the Indian Head Research Station sent out more than one billion free trees to western Canadian producers. 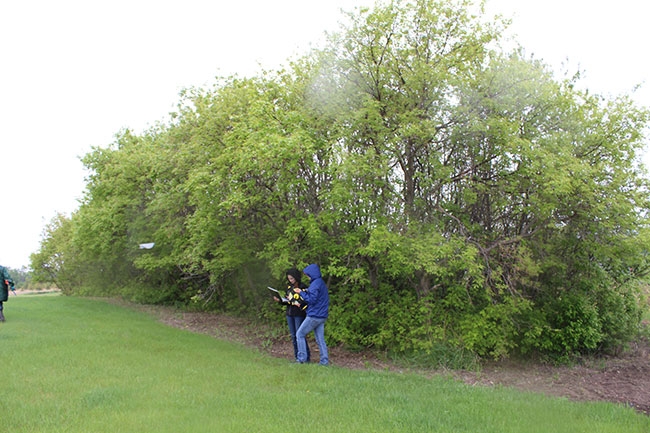 The stream of free trees slowed to a trickle, then dried up completely in 2012 and 2013 when the Harper Government dismantled the program.

But the trees could be coming back – if their carbon sequestration potential is recognized under a carbon tax credit scheme, says Colin Laroque, a professor in the University of Saskatchewan’s department of soil science. Saskatchewan has so far resisted signing on to the federal government’s carbon tax credit program, but Laroque believes it’s inevitable.

And the carbon storage potential of shelterbelt trees is very real. Laroque and his team have just wrapped up a multi-year Agricultural Greenhouse Gas Program-funded project looking at the above and below-ground carbon storage potential of shelterbelts, broken down by tree species in Saskatchewan. The project has been renewed for a second phase that began this spring.

The first part of the project involved determining how many shelterbelt trees still exist in Saskatchewan, and getting a sense of producer perceptions of their value.

Using satellite imagery, the team discovered 51,000 kilometres of shelterbelts still stood in the province as of 2015.

“We started asking people how much they value shelterbelts,” Laroque says. “We had databases saying that in 1942, 100 spruce were sent to a specific location, and we’d use Google Earth and find the line of trees still there. We would then drive to the location to see how the trees were doing. For 65 or 70 years they’d been growing, and we could measure their carbon storage potential.”

“Now we want to know how often and how many people are pulling out trees. Every year a tree grows you sequester carbon. But every year people also pull them out,” he says.

The survey found most producers did not recognize the economic or environmental benefits of shelterbelts, as they are not compensated for the work involved in planting and maintaining them. Perceptions differed, however, based on the type and location of the trees. Shelterbelts in open fields were viewed more negatively than shelterbelts around farmyards and farm buildings.

One key finding was that large-scale producers believed shelterbelts are outmoded. “Many of the producers in Saskatchewan are also shifting from shelterbelt agroforestry systems to the use of other technologies for large-scale agriculture operations, such as zero-till and chemical fallow, indicating that field shelterbelts were no longer the preferred best management practice for some producers,” Rempel concluded in the article.

“Quite a few people aren’t aware of the broader landscape benefits, but even if they are aware, it’s hard to expect someone to bear that cost on their own without an incentive,” says Rempel, who now works as an area marketing representative for Richardson Pioneer.

Rempel’s advisor, Suren Kulshreshtha, is a professor in the University of Saskatchewan’s department of agricultural and resource economics. Kulshreshtha led the team looking at the economics of shelterbelts in the first phase of the project.

When producers involved in the survey were asked to identify the economic value or costs of shelterbelts, “most didn’t have any idea,” he says. “We also asked them if environmental benefits of shelterbelts were important for society and for themselves, and they acknowledged the benefits but said they didn’t see any of the benefits coming to them.”

In terms of costs, producers were quick to note shelterbelts take land out of production, can create problems for large equipment, and can result in neglected areas of fields, when, for example, sprayers can’t manoeuvre near margins, Kulshreshtha says.

Research assistants collect samples and data on a shelterbelt near Melfort

Actual benefits
Laroque says where the shelterbelts are located makes a huge difference. Most equipment is at least 64 feet wide, and field shelterbelts can be a major hindrance. But around farmyards, farmers “treasure them,” he says.

How producers perceive shelterbelts depends a great deal on the information they have access to about their value, however. He believes farmers are pulling shelterbelts out without understanding their potential value for carbon sequestration – value that ultimately boils down to a dollar amount. In short, they don’t have the tools to make an informed decision.

“What are the perceptions? If it’s about tractor management that’s one thing, but if you could put a price on carbon, how much carbon are those trees actually sequestering?” he asks.

In the next phase of the project, his team aims to create an extremely practical solution to this problem: an app that producers can search by location, soil zone and tree species to get a sense of the potential monetary value of shelterbelts.

“What we want to do is create an app where they can say, ‘If I planted hybrid poplar, which will give us the best carbon sequestration, and if the government gave us a credit, it would be worth this many dollars,’” he explains. “That would be much more practical and allow farmers to decide whether or not to rip out the shelterbelts. What we realize is that they’re not taking the whole carbon budget into the bigger picture.”

Rempel believes western Canadian producers are approaching a tipping point when it comes to shelterbelts, as many of the trees planted as part of the original Indian Head program are beginning to die back.

“Farmers have done tons of work over the years to plant and care for shelterbelts and some of the trees are reaching the end of their lifespan. They’re 80 years old,” she says.

“So, if we want to have more shelterbelts, we need to have incentives, and resources and tools. It’s hard to find information even if you’re a university student doing research on optimal design.”