Seeding canola early in the spring can help growers increase the potential for higher yields and better quality, which is important as industry looks to increase production. However, low soil temperatures can delay seedling emergence and uniform crop establishment, and significant yield losses can result from the need to reseed or delay seeding to avoid frost or cool soils.

Researchers are turning to molecular tools to help screen and select canola varieties that would perform better under low soil temperature and spring frost conditions.

In a three-year project (2011-2014) led by Ludovic Capo-chichi, researcher with Alberta Innovates – Technology Futures (AITF) in Vegreville, Alta., researchers wanted to determine the effect of low temperature on seed germination and seedling performance of a diverse set of Brassica napus and B. rapa lines. They also wanted to identify molecular markers for improved cold tolerance and to evaluate the effects of seed size on emergence.

“We investigated over 600 lines from a worldwide collection of canola, including Brassica rapa, B. napus, B. juncea and B. oleracea, which allowed us to take advantage of the whole diversity of Brassica species in our search for the markers linked to cold tolerance,” Capo-chichi explains. “We tested germination and emergence at low temperatures to determine if there was any genetic variation between lines. Through the screening process, we selected 169 lines with the highest, middle and lowest tolerance to low temperatures, and then screened those lines for associated molecular markers. As a result, we have identified the markers for low temperature tolerance and are now going through the validation process.” Collaborator Isobel Parkin with Agriculture and Agri-Food Canada in Saskatoon, Sask. provided the molecular screening and genetic analysis of the lines for the project.

Screening this large number of lines provided researchers with an overview of the wide range of genetic variability of Brassica species, including variations in seed size. Although generally it is expected that a larger seed size results in faster emergence, this study could not confirm that. “We found that some of the smaller-seeded genotypes emerged much faster than larger-seeded genotypes under lower temperatures,” Capo-chichi says. “However, a few larger-seeded genotypes emerged slightly faster than smaller-seeded genotypes. Therefore, varietal selection based on seed size for faster germination in cold spring soil isn’t a good indicator or method of selection. We suspect there are other compounds in the seed that enhance the speed of emergence and the next step is to try and identify those compounds that contribute to the
faster emergence.”

As part of the project, researchers assessed canola seedling emergence at the two-leaf or cotyledon stage to measure their response to low soil temperatures, comparing emergence at 5 C, 10 C and 15 C. They also assessed seedling response to freezing-shock at -5 C for various periods of time, which is the stage at which B. napus in particular is most sensitive to frost. The combination of freezing temperatures and varying exposure time enabled researchers to identify important differences between line responses to applied cold stress and to estimate the freezing tolerance of the various lines in the seeding stage. Frost injury was visually assessed as well as being inferred from the measurement of chlorophyll fluorescence.

All genotypes began to emerge within two to four days of seeding at 15 C. However, at 5 C, there was significant variability in seedling emergence among genotypes. Under low temperature stresses, the time to first seedling emerged, and 50 per cent emergence index was much longer in B. napus and B. rapa than in B. juncea. Overall, B. juncea appeared to be more tolerant to low temperatures than B. napus and B. rapa, although several B. napus genotypes were as hardy as B. juncea.

“As a result we have been able to find a link to several low temperature markers that helps give the line an adaptation to a variation in temperature,” Capo-chichi explains. “We have successfully ranked all lines for seed germination and seedling performance at low temperatures using seed produced under greenhouse and field conditions. In the spring of 2016 we will validate the marker under field conditions, either lines tolerant to low temperatures or lines that are very susceptible.”

Now that the low temperature marker has been identified, researchers want to see if this same marker can also be used to study high temperature conditions. “We have demonstrated that there are differences in the germination and seedling emergence in response to low temperatures, and [we] are now looking at responses to higher temperatures,” he adds. “We want to look at what will happen if we raise the temperature to very high levels in the various lines, such as at the flowering stage where the plant is susceptible to heat, which can destroy flowers and consequently affect yields.”

Once the molecular markers associated with low temperatures and cold tolerance have been validated, researchers will make the technology available to plant breeders. “They will be able to use marker assisted selection and screening to confirm whether or not a line is tolerant or sensitive to low temperatures and frost depending on the presence or absence of the marker. This will assist with transferring cold hardiness into commercial canola lines. Breeding for improved vigorous emergence at low temperatures and frost tolerance will help with early seedling establishment and improved productivity for growers. We hope to be able to add markers for tolerance to higher temperatures down the road, which will also help breeding for improved yields and quality.” 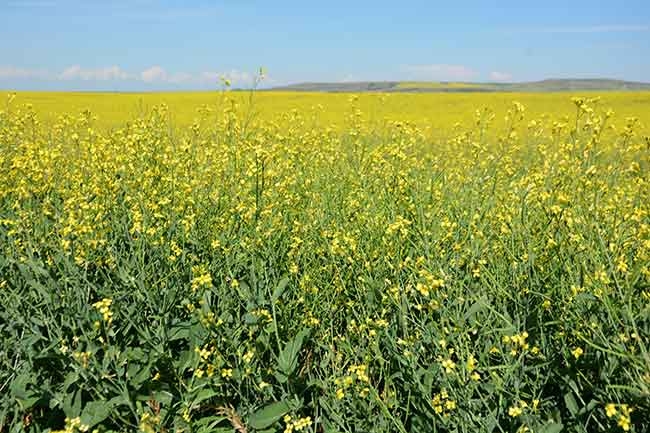 Researchers are turning to molecular tools to help screen and select canola varieties that would perform better under low soil temperature and spring frost conditions. Seeding canola early in the spring can help growers increase the potential for higher yields and better quality