Combine header selection is just one of many factors growers have to evaluate when considering straight cutting canola. In a three-year project launched in 2014, researchers in Saskatchewan are evaluating different header types to find out whether or not there are differences in headers and what factors make a difference.

“We are using full-scale machinery and very large replicated plots for the trials,” explains Nathan Gregg, project manager with PAMI. “The combine is a CR 9080 and header widths are 35 or 36 feet, depending on the treatment, with individual treatments about 80 feet wide and 400 to 1000 feet long. The project is focused on combine header performance, not optimal combine performance, so we are using a fixed ground speed and other settings for better comparison between headers.”

The four harvest treatments include swathing and belt pick-up as a control compared to a draper header, which is fairly common throughout the Prairies, a rigid auger header and a new style header (Varifeed) with an extendable knife. “The Varifeed header style has been used in Europe for a few years and is starting to be used in Western Canada,” Gregg says. “This header has an extendable cutter bar that can be moved forward about 23 inches. The one we are using in the project is hydraulically activated and can be moved from the cab, while there are other fixed attachment options that have fixed extensions.”

Although there are still two more years of data collection for the project, preliminary observations from the 2014 harvest so far aren’t showing any clear differences between the headers. “We are trying to evaluate specific treatments to determine if one header performs better than the others,” Gregg says. “However, in terms of yield in year one, we didn’t see any significant differences between harvest treatments. We measured header losses through the use of pans for shatter loss and throw-over from the header, and again the performance was very similar with relatively low losses. The Varifeed appears to show some advantage, although we need more data. It appears that the extended knife may be able to collect shatter losses induced by the reel a little better and may provide for smoother crop flow.”

Researchers also tried to identify the location of the header losses by putting pans across the width of the header and into the zone just beyond the header into the adjacent crop. As expected, most of the shatter losses were concentrated at the perimeter of the header around divider points.

Gregg says preliminary findings validate the assumption that the divider point contributes a good portion of shatter losses, while the reel isn’t contributing as much loss as initially anticipated. “We need to investigate further why we are tending to see a higher proportion of the losses at the divider and perimeter, and again near the centre of the header as the material moves into the feeder house.”

Header dividers are of interest so the project researchers compared powered side cutters including a vertical knife on some configurations and a rotary knife on others. In 2015, passive end point dividers have been added to the treatments. “In 2014, we did see losses increase at the edges of the header,” Gregg explains. “The powered knife may be causing higher losses because sometimes whole pods and branches are lost compared to a passive divider that may shake the plants and cause a few pods to open. Although this is fairly common in swathers, the powered knives may be causing some additional losses, particularly in drier conditions.”

Environmental shatter losses were also measured by putting out pans in adjacent crop at the same timing as the swathing treatment. The pans were collected just prior to straight cutting harvest treatments.

The varieties performed fairly similar across all treatments, except at Indian Head in 2014 where a significant wind event caused substantial losses in the standard hybrid as compared to the shatter resistant variety. In those trials, the control swathed and combined standard hybrid plots out-yielded the other standard plots by about four bushels per acre. The shatter resistant variety performed well in all harvest treatments, with no significant difference in yield.

“We expect to be able to provide more details at the end of the three-year project and provide some recommendations to growers,” Gregg says. “At this point, although we may find some differences in headers, any slight advantages may be marginalized relative to all of the other decisions and management practices that growers use. One header might reduce losses by a couple of bushels. However, losses overall may be reduced by properly timing harvest activities, making sure plant densities are optimized and other good agronomic practices that produce a good even high yielding stand.”

Gregg notes there are generally intrinsic risks and losses with both systems and it comes down to which ones you want to manage and which ones fit your farm. “Straight cutting is just another tool in the toolbox, and works for some people on some farms in some years,” Gregg adds. “There is a whole management aspect of straight cutting that needs to be considered along with all of the other factors in a compressed harvest window.”

A farm with a lot of combine power and labour availability might find straight cutting a good option because crops can be combined the day they are ready. However, growers have to be patient and may have to wait a bit later in the season. On the other hand, a smaller operator with limited combine capacity and limited labour may want to include swathing to spread out the already compressed harvest window.

Preliminary project results will be presented over the winter at various extension events, and the straight cutting research will be included in upcoming 2016 field days. Once the project is complete, an economic analysis will be completed with final project results available in early 2017.

The project is jointly funded by SaskCanola, Saskatchewan Ministry of Agriculture and the Canada-Saskatchewan Growing Forward II Bilateral Agreement, and the Western Grains Research Foundation. 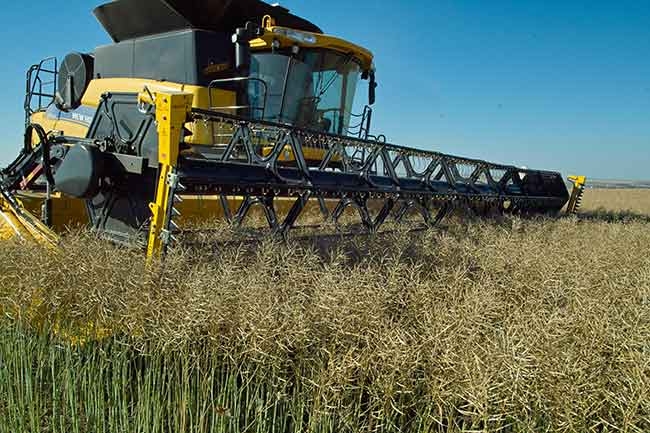 The 35 foot New Holland Varifeed header. Combine header selection is just one of many factors growers have to evaluate when considering straight cutting canola.