Since 2003, the annual survey has been performed with the main objectives of (i) collecting insect pest data throughout the region and (ii) to detect introduction of the cabbage seedpod weevil into the Peace River region. In 2015, a total of 162 canola fields were randomly selected. Fields were spaced approximately 10 km apart and surveying was performed through the main canola producing areas of the B.C. and Alberta Peace during early- to mid-flower stages. Unfortunately, fewer fields were sampled north of 57.3° in 2015 (i.e., near Manning, LaCrete, Fort Vermilion and High Level) owing to sparse and patchy canola fields that suffered from repeated frost events and severe drought. In 2015, sweep-net monitoring was performed in 162 commercial fields of Brassica napus (e.g., each field ≥80 acres in size) using 50 - 180° sweeps on the following dates in these areas: 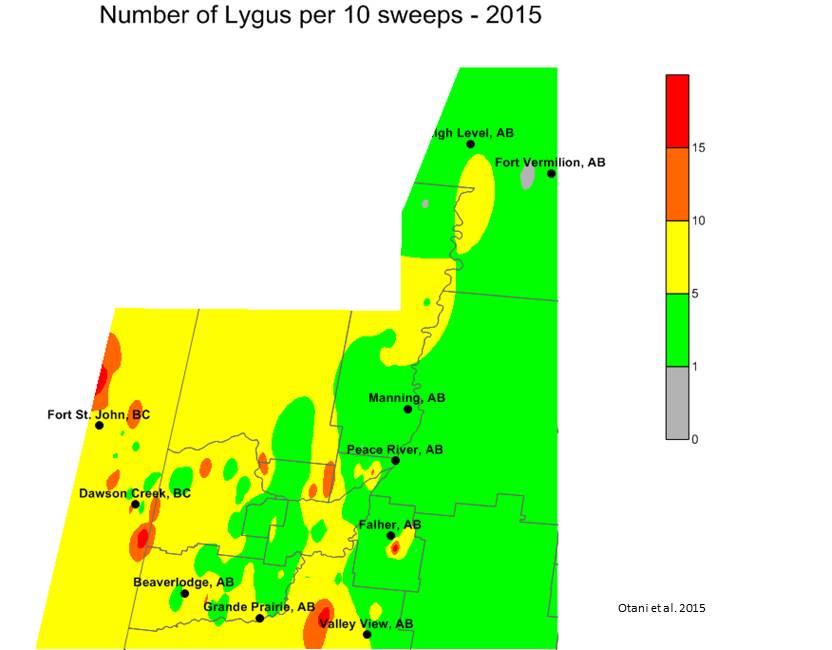 There were zero Lygus present in only 2.5 per cent of fields surveyed (Table 1) whereas 21.6 per cent of the canola fields contained only adult Lygus versus 75.9 per cent of the fields that were populated by both adults and nymphs (Table 2). Note that all nymphs collected during surveying were expected to have matured into new adults by the early pod stage. Areas highlighted yellow, orange or red in Figure 1 may contend with Lygus with the continuation of dry, warm growing conditions typically favouring the development of Lygus nymphs to adults.

Diamondback moth (Plutellidae: Plutella xylostella) were generally present in low numbers in the sweep-net samples (N=162 fields) in 2015. Sweep-net monitoring is NOT recommended for this insect pest yet we collected a total of 672 specimens from 162 fields in 2015 compared to 230 specimens in the 206 fields in 2014 and 93.6 per cent of the 672 specimens were DBM larvae. Sites with higher numbers of DBM included Valleyview, Farmington, Ridge Valley, Baldonnel, Donnelly, Fort St. John, Beaverlodge, Blue Hills and DeBolt.

It's important to note that parasitoid wasps (e.g., Diadegma sp. and Microplitis sp.) were observed throughout the region and the presence of these natural enemies of DBM is strongly suspected to be keeping DBM densities relatively low. 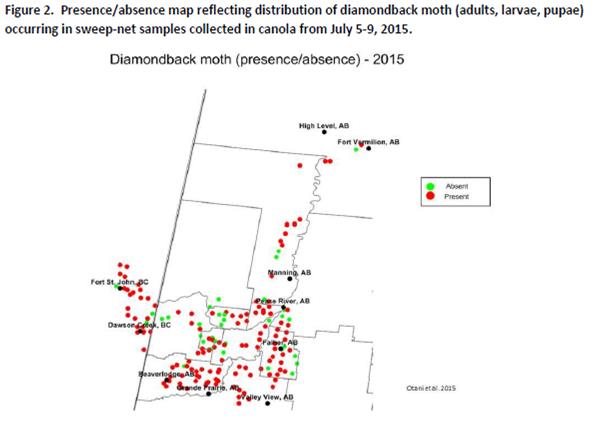 Root maggot (Delia sp.) adults were again prevalent in fields and were collected from 122 of the 162 sites surveyed throughout the Peace River region in 2015. Numbers collected by sweep-net surveying ranged from 0.2-5.6 Delia sp. flies per 10 sweeps versus 0.2-10 flies per 10 sweeps in 2014 but growers should note – root assessments, rather than sweep-net monitoring, is recommended to accurately assess densities of root maggots.

Leafhoppers were observed in 69 of 162 fields yet densities were consistently low in our canola sweep-net samples in 2015. The highest density was six per 50 sweeps in a canola field near Fort Vermilion and near Bezanson.

We are again happy to report that zero cabbage seedpod weevil (Curculionidae: Ceutorhynchus obstrictus) were observed in the 162 fields sampled in the Peace River region in 2015. Approximately nine small weevils measuring <4mm in length and <20 beetles measuring <5mm in length were retained from the survey samples for forwarding to the National Identification System (AAFC-Ottawa) for species confirmation

Previous cropping data was recorded by visually inspecting the soil surface of surveyed canola fields. Surface field trash was categorized then summarized in the figure below (Note: category "cereal" was used to describe fields where the previous crop was either barley or wheat yet no seed was readily observed nor was the straw sufficiently intact to determine the presence/absence of auricles).