Researchers in Alberta are relying on nanotechnology to come up with a new solution for warding off Sclerotinia stem rot, one of the most destructive diseases of canola. 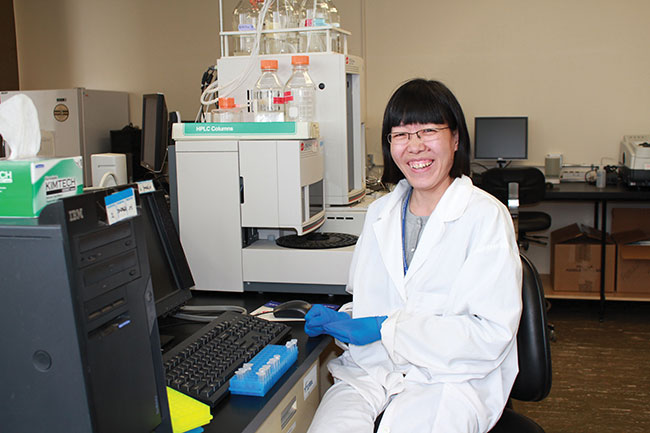 A new tool on the horizon for fighting Sclerotinia stem rot in canola is continuing to show promise.

InnoTech Alberta, a subsidiary of Alberta Innovates and the province’s largest research and innovation agency, is currently looking for a commercialization partner for the tool which utilizes nanotechnology to detect Sclerotinia spores that threaten canola crops.

It was developed by Susie Li, an InnoTech Alberta researcher who believed there had to be a better way to help western Canadian producers deal with one of the most damaging diseases of canola.

Li’s solution is a futuristic device that relies on tiny nano-biosensors to detect minute traces of Sclerotinia and can alert growers on their smartphones when spore levels reach a point where they should spray for the disease.

Li says current control methods, which involve predictive instruments such as checklists and risk assessments that inform farmers when conditions are favourable for Sclerotinia stem rot development, are imprecise and can be unreliable due to unpredictable weather conditions.

“This device works in real time in the field and it’s more accurate,” Li says. “If there are no spores present, whatever the condition is in the field, you won’t have the disease and there’s no need to spray.”

Li maintains the device eliminates the need for canola producers to scout their fields for signs of Sclerotinia stem rot, and that by speeding up and simplifying Sclerotinia detection, it helps growers make quicker disease control decisions.

“Right now, if you want to find out if Sclerotinia is there or not, you need to go into the field, collect tissue samples and then send them to the lab,” she says. “It usually takes at least a week to get your results back, and by then it’s probably already too late to spray.”

Li says there have been a number of hurdles to overcome since the project started five years ago.

One was coming up with a system for collecting and counting Sclerotinia spores, which Li says was accomplished by developing antibodies specific to Sclerotinia and incorporating them in the biosensors.

“The sensor chip is coated with these specific antibodies, so it will recognize Sclerotinia spores only,” Li says.

The next step was improving the sensitivity and lowering the detection limit of the biosensors to make them more precise. Li says this was achieved new microfluid technology that enables fluids to be processed at an extremely small scale.

“When we started this project, we had to have around 1,000 spores to cause the signal to change to a level that was detectable,” Li says. “We solved that problem by using the micro fluid technology. Now we can detect a single spore going to the chip and sensitivity is no longer an issue.”

A delivery process then had to be developed for relying the biosensor readings to devices like a computer tablet or a smartphone, so that remote users know when Sclerotinia spore levels have reached a point where they’re a problem.

This was accomplished with the help of researchers at the University of Alberta, who designed a signal transmission system for the biosensors using Bluetooth technology. Li says the U of A researchers are currently devising a new system that enables the signals to be sent via Wi-Fi.

The first working prototype of Li’s Sclerotinia detection system had its initial in-field test last summer at InnoTech Alberta’s experimental farm in Vegreville, Alta. The testing revealed a design flaw in the biosensors, which Li and her team are currently addressing.

“The air samples we took were dirty and blocked the very thin tube that goes form the sample reservoir to the biosensor chip,” Li says. “We need to add a really tiny screen that can screen out whatever material we don’t want to go through the tubing.”

Li hopes to have a fix ready for another test of the prototype this summer, but she points out progress has been constrained by the pandemic.

“We are moving forward, but really slowly at the moment” she says.

Li says one of the objectives of the testing is to determine how many nano-biosensors are required on a per-field basis for the system to operate effectively.

Li and her team are also investigating ways to make the system less expensive so that it’s more attractive as a cost-effective solution for farmers. She says while the cost for one biosensor is currently around $30, a search is underway for a manufacturer that could possibly bring the price down to $10 per biosensor.

A new, early-warning system like this for warding off Sclerotinia stem rot is obviously something that would benefit canola producers on the prairies right now, but Li anticipates it’ll be a few years yet before a commercial version is ready to be unveiled.

“I’ve gone to several agronomic conferences and had people come up to me say, ‘Whenever this is ready, I would like to have it to test my crop,’” she says. “So, yes, I’d say the growers are really excited about it.”