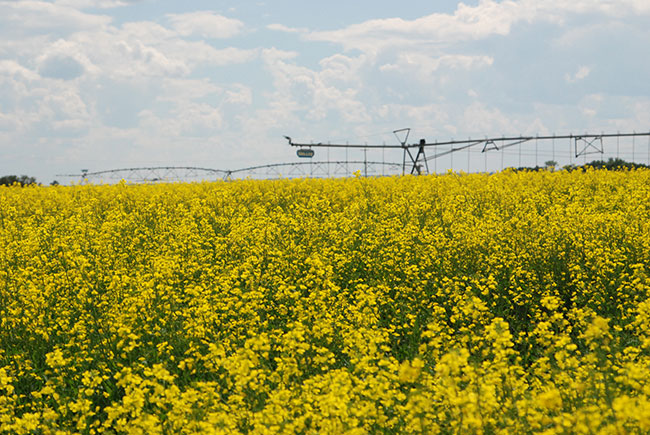 Managing sclerotinia disease on irrigated land is difficult, as over 50 per cent of the crops grown are usually hosts for the disease. Additionally, the favourable disease environment under irrigation and tight rotations often means sclerotinia stem rot and white mould, caused by Sclerotinia sclerotiorum, are a challenge whenever a favourable host like canola or dry beans is grown.

“In the push to pay the costs of irrigation development and operation as well as to maximize profits, sclerotinia-susceptible crops are commonly grown on irrigated land without an intervening cereal break crop,” says Gary Kruger, irrigation agrologist with the Saskatchewan Ministry of Agriculture in Outlook. “That can mean that reliance on foliar fungicides alone to control this disease in irrigated fields can fail.”

Kruger says that the use of the biological control product Contans WG, Coniothyrium minitans, can be helpful in reducing sclerotinia outbreaks. It controls the accumulation of sclerotia bodies in the soil in a crop rotation with high frequencies of sclerotinia-sensitive crops.

Under the right temperature and moisture conditions, sclerotia will germinate to produce apothecia or soil mycelium. Mycelium can infect roots of certain crops like sunflowers. Apothecia will produce millions of ascopores, releasing them into the crop canopy to infect host plant tissue. Contans WG prevents any sclerotia it infects from germinating; however, it must come in contact with the sclerotia, which has left some skeptical of the product.

“Irrigation farmers have had a hard time buying into Contans because proving its efficacy is difficult on a field-scale basis,” Kruger says.

Even though 2017 had low sclerotinia pressure, Kruger says that, in the demonstration trial, the treated strips showed modest yield response for both lentil and dry bean. Lentil had a yield increase of five per cent and dry bean had a seven per cent increase.

“What makes this result more remarkable is that the yield response occurred even though the grower applied a blanket treatment of foliar fungicide for sclerotinia control on both fields,” Kruger says.

Impact of Contans on seed yield of lentil and bean in 2017.
Chart courtesy of Gary Kruger.

Ziprick says that Contans WG should be applied at least three months prior to an anticipated sclerotinia outbreak to allow the natural soil fungus active ingredient to destroy the sclerotia bodies. The mycelium of C. minitans attacks the resting survival structures (sclerotia) of the pathogens sclerotinia spp. in the soil and destroys them typically in 90 days with soil temperatures between 5 C and 30 C.

In Canada, Contans WG is registered on canola, sunflower, safflower, dry edible beans, soybeans and alfalfa, in addition to some vegetable crops and ornamental flowers.

Contans WG can be applied by spraying the soil surface or crop residues using conventional ground spray equipment. It should be applied alone, as the active ingredient contains viable spores that can be rendered inactive if mixed with pesticides or fertilizers. To ensure good coverage to the soil, use minimum water volumes of 10 U.S. gallons.

The spores of C. minitans have to get in contact with the sclerotia or the mycelium of sclerotinia, so incorporation shortly after application is essential. Ziprick says the most common incorporation method is with a heavy harrow or light cultivator set no deeper than two inches.

“Incorporation serves two purposes. The first is to protect the fungus from the damaging effect of the sun’s rays and UV light. The other is to distribute it uniformly so that the fungus has a better chance of encountering the sclerotia bodies in the soil,” Ziprick says.

In the United States, Contans WG can be incorporated with 0.5 to one inch of rainfall or irrigation. That method is not currently registered in Canada.

“The $8 per acre rate is low enough that it could be justifiable for irrigation farmers to use annually,” Kruger says.