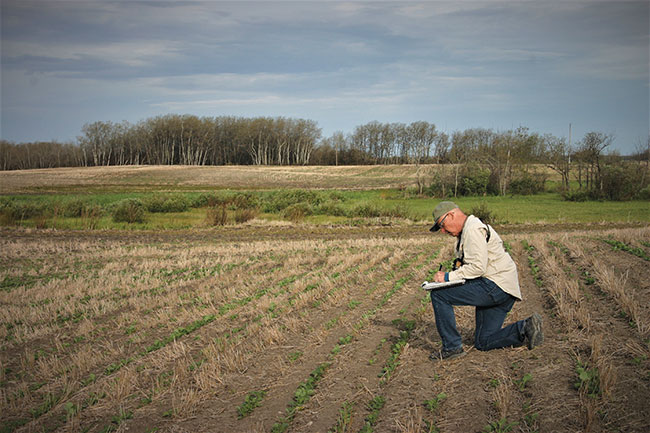 Birdsong forms the auditory background to farm life, but without an effort to preserve their habitat in non-cropped areas, some Prairie bird populations will continue to rapidly decline or disappear altogether, according to new research.

“So many birds have been experiencing dramatic population declines in recent years, particularly because of habitat loss,” says Fardausi Akhter, a research scientist in agro-ecosystems with Agriculture and Agri-Food Canada.

Akhter is the lead on a comprehensive study of field boundary habitats in agro-ecosystems that looks at how agricultural productivity is boosted by the presence of non-cropped areas such as field boundaries, roadways, shelterbelts and wetlands.

The project, which began in 2017, was initially funded by AAFC and is now funded by Saskatchewan’s Ministry of Agriculture through the Agricultural Development Fund, and is now in its second phase; Akhter hopes it’ll conclude by 2025.

A recent report published by Environment and Climate Change Canada on bird population trends between 1970 and 2016 found that waterfowl and birds of prey have increased by 150 per cent and 110 per cent, respectively, thanks in part to the work of wetland habitat conservation organizations like Ducks Unlimited. But the tale is far more sobering when it comes to grassland species and other bird populations linked to agriculture.

Birds that rely on grassland for wintering and breeding, Akhter says, have decreased by up to a whopping 87 per cent. “Our grassland birds are under huge threat now,” she says. “Even other species that can tolerate agricultural landscapes have declined by 39 per cent. That speaks to the importance of leaving some habitat for birds before we lose them entirely.”

The plight of a few Prairie species, she says, deserves highlighting. In Saskatchewan and Alberta, Sage grouse is endangered and McCown’s longspur is threatened. In Manitoba, the grassland species Sprague’s Pipit is threatened and Baird sparrow are listed as endangered; the reason for their population decline is habitat loss. Burrowing owl, Red-headed woodpecker and Chestnut-collared longspur are all either endangered or threatened.

Akhter’s team and other research groups in Canada and around the world are still attempting to come up with specific best management practices for bird conservation, but a rule of thumb is to try to preserve non-cropped areas totaling roughly 10 per cent of a farming operation for habitat. 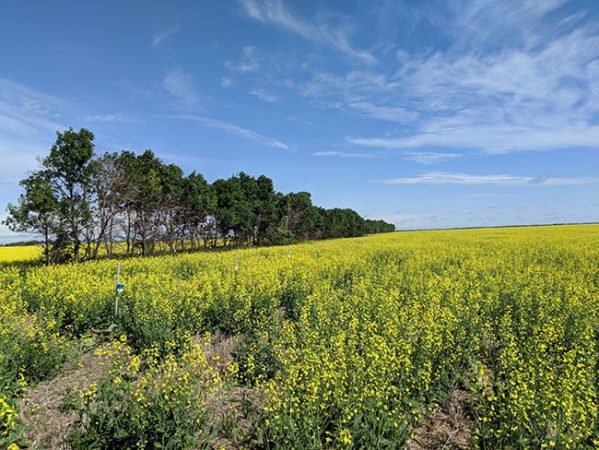 Researchers recorded twice as many birds in farmland shelterbelts than farmland with no habitat.

Study parameters and results
In the study’s first phase, Akhter’s team did bird surveying in person. Bill Bristol, an avian biologist, walked each of the study’s fields early in the morning twice a year between May and June. Two 350-metre walking transects were used at 50 metres and 350 metres from the field boundary to record any bird they saw or heard. One problem with this approach is the fact that some birds naturally fall silent when humans are near.

In the second phase, autonomous recording devices will be placed in the field instead, says Akhter. Software has advanced to the extent that individual bird sounds can be captured and identified. Using available software, the team will validate the results from the first phase of the study and hopefully fine-tune their results.

“What we found was that natural vegetation sites near native hedgerows and road allowances had on average four times more birds than open field sites,” she says. Shelterbelts had on average two-and-a-half more birds than open field sites; this is perhaps due to the fact that shelterbelts tend to be limited to a few species and are sometimes heavily groomed below tree-level to mitigate the risk of weed seeds entering the seedbank.

Some birds listed as being of special concern for conservation efforts by the Cornell Lab of Ornithology and COSEWIC (The Committee on the Status of Endangered Wildlife in Canada), such as the Grasshopper sparrow, were actually spotted in the field, Akhter says. But one threatened species, the Barn swallow, was only spotted four times in three years, always in hedgerows. 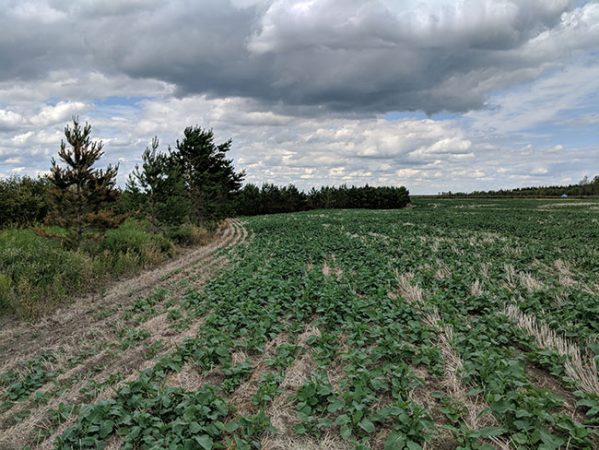 Applications
The importance of natural vegetation for habitat cannot be overstated for birds on the Prairies.

Akhter says she often thinks of a story told by Benjamin Franklin, considered by some to be the United States’ first environmentalist, in a 1749 letter. Writing about blackbirds, Franklin said the bird had been considered a pest of corn in New England. A bounty was set up for the blackbird, until the species was finally eliminated in the region. Only after was it discovered the blackbird was keeping a worm pest of corn in check, and without its natural predator, the worm increased to the extent that the farmers wanted to re-introduce the blackbird.

“Sometimes we’re too shortsighted to comment on the benefits and costs of certain species. We probably only see one factor,” Akhter says.

Birds perform a large number of services for agriculture. They feed on a wide range of insect crop pests; by reducing the number of adults in the field, birds also reduce the number of eggs laid on leaves, and thus insect larvae, which are also damaging to crops.

Beyond habitat loss, part of what’s threatening bird species is a reduction in insect species due to insecticides. Insectivores feed their young with what they catch in the field. The upshot, Akhter says, is that producers need to be aware of when – and how much – they are spraying in the spring to try to mitigate impacts on bird populations.

Nuthatches and woodpeckers feed on tent caterpillars, to name one example; the former species are declining while the latter is increasing, and Akhter says that without natural controls insects like tent caterpillars can “multiply enormously,” perpetuating a cycle of reliance on synthetic controls.

“It’s not sustainable. I’m not going to say that we should not spray pesticides and insecticides at all, but we need a balance and proper management practices so that we can keep our croplands more eco-friendly,” Akhter says. “We need to keep watching when we’re applying pesticides or insecticides and we should not apply at a time when insects and birds and beneficials are most active because by killing the insects and pests we’re killing the beneficials too.”

Producers can act at a baseline level, she says, by leaving any remaining natural areas untouched, and ideally by converting marginal areas to permanent or semi-permanent cover, planting and maintaining shelterbelts, and conserving wetlands. These will be useful not just in maintaining bird populations, but other wildlife species as well.

Akhter admits researchers still need more data on the economic import of bird conservation. This data is being collected, she says, but in general there is a knowledge gap for birds, while pollinators and bees have gained more attention.

“I think it’s important that our producers learn about the impact their farming operations can have on birds that are important in an area,” Akhter says. “If we do not act right now to save some habitat for them, they are not going to survive.”

Tree-based intercropping
Akhter is the lead on another project looking at intercropping annual crops with high-value hazelnut and berry shrubs (such as haskap, buffaloberry and sea buckthorn), which can perform a range of ecosystem services and provide a value-added processing benefit to producers. Such a system could best be adapted for marginal lands, increasing income on a per-acre basis for producers, she says. It could also increase habitat for many species, including grassland birds.


Related
Native bees need habitat support, too
Field boundary habitats: The ecological diamonds in the rough
Buzzing about canola yield and quality
BadgerWay is back for 2017