Japanese (Bromus japonicas) and downy (Bromus tectorum) brome are winter annual weeds that typically germinate in the fall, overwinter as small seedlings, and start growing in the spring. This growth habit, which matches that of winter wheat, makes them aggressive competitors. In an effort to expand the choices in herbicides, research scientist Eric Johnson with Agriculture and Agri-Food Canada (AAFC) at Scott, Sask., is in the midst of a three-year research trial hoping to add to pre-seed and in-crop control options.

“Simplicity herbicide is registered in winter wheat, and it is the standard for control of Japanese brome. It has suppression for downy brome. Our results from the trial would confirm those control ratings,” says Johnson.

The trials were conducted at Scott, and at Lethbridge and Coalhurst, Alta., in 2012 and 2013. CDC Falcon winter wheat was sown at 300 seeds per square metre. Johnson plans on conducting one more trial year in 2014. The first two years were funded by AAFC’s Growing Forward program, Ducks Unlimited Canada, FMC and Bayer CropSciences Canada.

Looking at Japanese brome control, Johnson says most of the treatments provided very good control – over 90 per cent – except for flumioxazin, which was rated as suppression with control in the 70 per cent range. Flumioxazin control of Japanese brome was also highly variable with a range between five to 95 per cent control. The other products provided consistent control over the two years and three sites.

“Flucarbazone-sodium, especially at Scott, was hard on the crop in the fall post-emergent application. I’m not sure why because we have an acid soil here and it’s usually not that active on our soils,” he says.

Downy brome control was more variable across the chemistries. The only active ingredient that provided control of downy brome was pyroxasulfone alone or in combination with flumioxazin. Pyroxasulfone was consistent across the sites and years, providing 93 to 96 per cent control. Simplicity provided good suppression at around 75 per cent control, which is consistent with the label registration. The other active ingredients provided varying degrees of suppression of downy brome. (See Fig. 1.)

Johnson likes the additional weed spectrum that pyroxasulfone could bring to winter wheat growers. At Scott, he saw very good control of shepherd’s purse, another difficult winter annual that commonly competes with winter wheat. “Some other herbicides could be used to control annuals, but you wouldn’t want to spend that much money just to get shepherd’s purse, so that’s a bonus you could get with pyroxasulfone,” explains Johnson.

FMC has applied to have pyroxasulfone plus carfentrazone (Focus herbicide) registered on winter wheat. Mitch Long, product development manager with FMC at Saskatoon, Sask., says that in addition to control of Japanese and downy brome, Focus has good activity on green, yellow and giant foxtail, barnyard grasses and Italian rye grass, and on the suppression of wild oats. The company is also hoping to get some broadleaf weeds on the label. Pyroxasulfone has shown good activity on cleavers, and information from the company that discovered the active ingredient confirms Johnson’s observation of good activity on shepherd’s purse. Other broadleaf weeds are also being considered for registration. Further, as a Group 15 herbicide, pyroxasulfone brings additional flexibility in herbicide rotations to help manage herbicide resistance.

FMC is hoping to obtain registration of Focus on winter wheat in 2015. In the meantime, Simplicity herbicide provides a high standard of control for Japanese and downy brome. If registered, Focus will add to growers’ choice in winter wheat weed control. 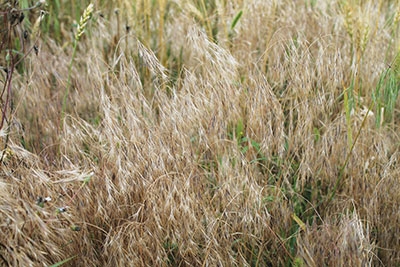