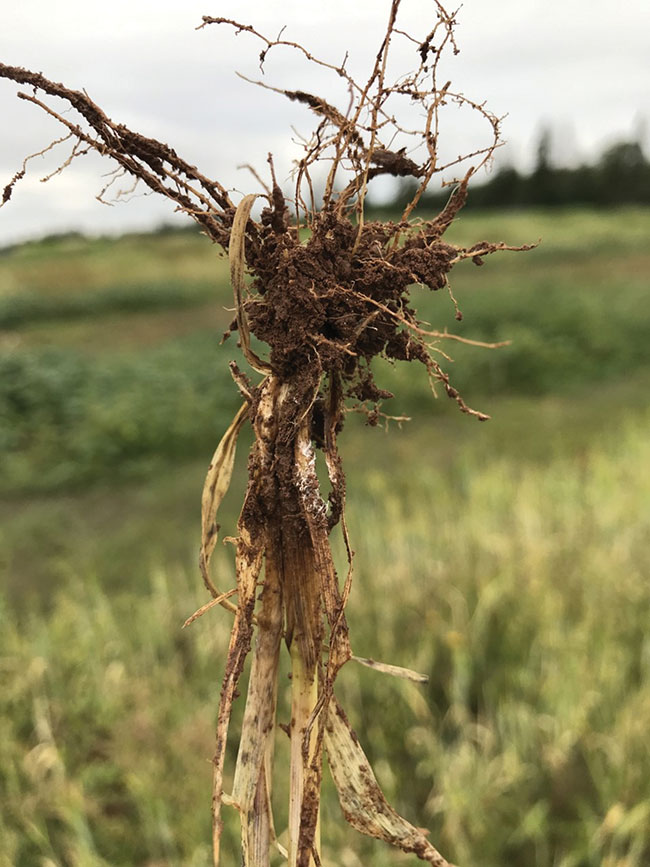 In the trials, the most prevalent disease in barley and soybean was Fusarium root and crown disease. Levels of this disease highest were after oilseed radish and lowest after sorghum-sudangrass. ALL Photos courtesy of Agriculture and Agri-Food Canada.

A P.E.I. research project has uncovered connections between cover crop type, soil microbiome characteristics, and disease in the following barley or soybean crop.

“Cover crops are a really important part of crop rotations. They have a number of well known and well characterized benefits like reducing soil erosion, increasing organic matter and even things like nitrogen fixation and increasing pollinators. But the microbial communities of cover crops have not really been examined in a lot of depth,” says Adam Foster, cereal and oilseed pathologist with Agriculture and Agri-Food Canada (AAFC) in Charlottetown.

“In our project, we wanted to determine if certain cover crops may have additional benefits by suppressing plant pathogen populations, which could lead to reduced disease pressure for soybean and barley grown the next season.”

This project was part of a larger study to examine the effects of cover crops on no-till soybean and barley. The study was funded by the Atlantic Grains Council and took place at AAFC’s Harrington Research Farm.

For their project, Foster’s research team and his graduate student Harini Aiyer conducted two small-plot field trials, one in 2018 and 2019, and the other in 2019 and 2020.

In the second year, each plot was split in half, with one half planted to barley and the other half to soybean. The barley and soybean plots were seeded in a no-till system, directly into the cover crop residues.

Then in the lab, they used DNA sequencing to determine the fungal and bacterial communities in the soil and crop residue samples. As well, they isolated and identified the microbes found in the barley and soybean plants.

Microbiome and disease effects
The researchers have already prepared a scientific paper delving into the effects of cover crop choice on the soil fungal and bacterial communities and disease in the following crops.

“Other cover crops had mixed effects on the soil microbiome. For instance, with oilseed radish, alfalfa and phacelia, we found the abundance of fungal pathogens actually increased after growing those cover crops, but there weren’t necessarily clear links to crop disease in the next year.”

The most prevalent disease in both barley and soybean was Fusarium root and crown disease. This fungal disease can be caused by many different species; in these trials, it was caused by several species including Fusarium oxysporum and Fusarium cerealis.

Foster notes, “We had an extreme weather event in 2019 followed by a drought in 2020; I think those conditions may have limited some of the other pathogens that we might have otherwise seen.”

Fusarium root and crown disease was also the only disease that was strongly affected by the cover crop type.

The team took an in-depth look at Fusarium root and crown disease, including some greenhouse experiments. “The main thing we learned from our work on Fusarium root and crown disease was how complicated the interactions are between the crops and this disease, particularly because the disease can be caused by a number of different fungal species. We found that different fungal species were associated with different cover crops. And we could culture all of these species out of the roots of barley and soybean in the next season,” he says.

“We are now working on a second paper to see if we can disentangle some of this complexity by exploring the microbiome of the cover crop residues into which the barley and soybean crops are planted in a no-till system.”

Soybean and barley yields were examined only in 2020 because the 2019 plots were severely impacted by post-tropical storm Dorian in September of that year. Foster says, “Looking at the 2020 results, barley had the highest yield after alfalfa, and soybean had the highest yield after annual ryegrass. There were only some small yield differences between some of the other cover crops.” With only one year of yield data, it was difficult to link soil microbiome characteristics to crop yields. 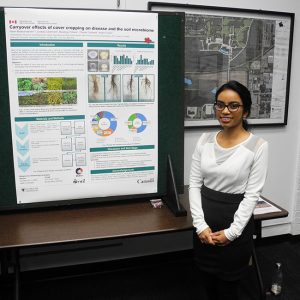 Graduate student Harini Aiyer worked with Foster’s research team to compare the effects of different cover crops on disease in the following barley and soybean crops. 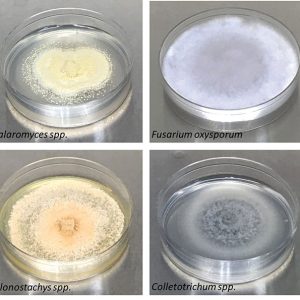 Fungi isolated from the barley and soybean roots included fungal pathogens like Fusarium oxysporum and Colletotrichum and beneficial fungi like Talaromyces and Clonostachys.

Storm-boosted pathogen populations
Post-tropical storm Dorian gave the team an opportunity to examine the effects of an extreme storm event on the microbiome.

“The post-tropical storm caused a lot of damage including lodging and mechanical damage to leaves, and soybean pods were particularly damaged. What really surprised us was just how quickly the microbiome changed following the storm,” he says.

“A number of different microbes increased, many of which were plant pathogens. We suspect this might be due to all the damaged plant material present after the storm, which boosts the populations of the pathogens that are taking advantage of the damage.”

He adds, “We think major storms can increase pathogen populations that are already present in an area just by giving them more material to feed on. But major storms also have the potential to bring in pathogens from the regions they have travelled through, so they can be a source of spreading disease.”

In the case of Dorian, Foster notes that the following year was very dry, which may have lowered some of the pathogen levels that had been elevated by the 2019 storm. 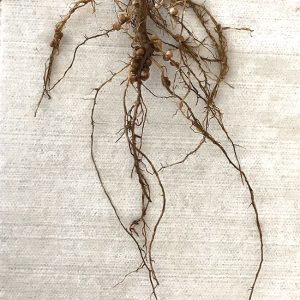 In the trials, the most prevalent disease in barley and soybean was Fusarium root and crown disease.

Levels of this disease highest were after oilseed radish and lowest after sorghum-sudangrass.

Take-homes and next steps
“For barley and soybean growers, we hope this research has given some insight into how cover crop choice may have effects on their future crops beyond perhaps the reasons why they originally planted the cover crops,” he says.

“In particular, growers might be interested in the benefits of buckwheat and sorghum-sudangrass for reducing root disease and increasing the abundance of beneficial microbes.”

Many PEI growers are familiar with these two cover crops. According to Foster, sorghum-sudangrass is one of the cover crops recommended for use in potato rotations to improve soil health by preventing erosion and improving soil organic matter.

Buckwheat is widely grown in PEI potato rotations these days because research by AAFC entomologist Christine Noronha has shown that buckwheat can really reduce tuber damage caused by wireworms.

Interestingly, Foster’s project found that buckwheat’s soil microbiome benefits included an increase in certain anti-insect fungi that might have the ability to suppress wireworms. “We are currently working with Dr. Noronha to see if we can isolate these fungi and determine if they do have an effect on wireworms.”

In addition to their current look at the microbiomes of the cover crop residues and the wireworm/buckwheat work, Foster and his team also have a couple of cover crop-related research proposals that are under consideration for future funding.

One project proposes to examine the relationship between cover crops, the microbiome and disease in different cropping systems, particularly focusing on corn rotations. The other aims to explore ways to reduce and prevent lodging in oats, which has links to the microbiome, cropping history and extreme weather.

As researchers like Foster discover more about the links between cover crops, the microbiome, and the effects on the following crop, crop growers will be able to get a more comprehensive picture of the pros and cons of different cover crop options.