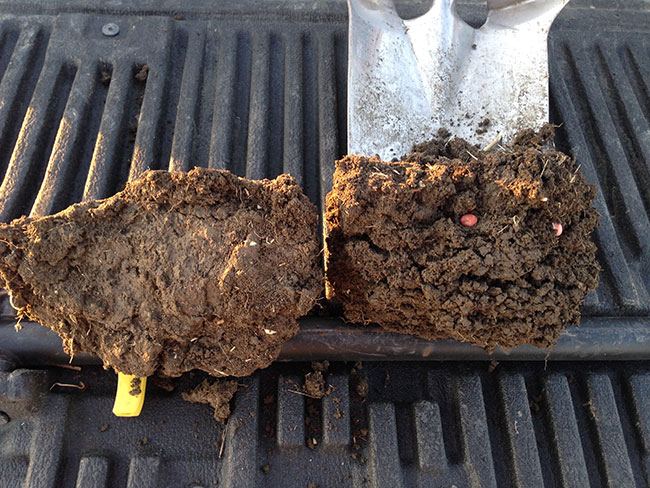 Soil structure differences in clay soil after five years of CTF taken 12 inches apart. The soil on the left has had a castor wheel from an air seeder run over it for five seasons. The soil on the right, taken 12 inches over, hasn’t seen any wheel traffic in five years. You can see the difference in porosity and aggregation in the untrafficked soil.  Photos courtesy of Steve Larocque.

Controlled traffic farming (CTF) is possible in Western Canada and can take management up a notch, but it takes a big up-front commitment to see the long-term results, according to a University of Alberta study released in 2019.

Eight farm operators made the CTF study commitment, and seven are continuing. The measurable yield benefits were small at best in the short term, but the long-term prospects are quite good.

CTF began in Australia in the 1970s – around the same time that zero tillage began in Western Canada – and it has been widely adopted there. To make the system work, the tractors, sprayers, carts and combines all must have a common wheelbase, and the working widths must be in matched multiples (usually 30 or 40 feet). Once the machinery is sized to match and synced by GPS, the operator restricts field traffic to distinct permanent lanes or tramlines, leaving the crop area free of traffic. Field traffic never leaves the tramlines and the tramlines remain in place year after year.

Steve Larocque, Nuffield scholar and independent crop advisor, brought the technique back to his own farm near Drumheller, Alta., in 2010 after a study tour in Australia. Since then, a handful of producers in the Prairie provinces have adopted CTF for their own farms.

Shortly after Larocque made the transition into CTF, the Agricultural Research and Extension Council of Alberta co-ordinated a farmer-led initiative to evaluate the system on a province-wide basis. The project was led by Peter Gamache from late 2010 until he retired in 2018 and at which point the research was completed.

Kris Guenette, a University of Alberta graduate student, compared the effects on soil conditions from both controlled traffic and regular field traffic conditions for three seasons from 2014 to 2016. The full report was published in the Canadian Journal of Soil Science in February 2019.

To simulate normal field compaction from equipment traffic, each grower selected two to five random field-length CTF swaths, usually 30-feet wide, and subjected them to equipment passes that normally occur. Tillage practices already were zero till or reduced tillage. Crop rotations were different and one site had irrigation.

“Each equipment operation in a conventionally-managed field compacts roughly 20 to 35 per cent of the field area,” Guenette says. “In one season, if you do three equipment field operations and do not follow the exact same track each time, you can compact 60 to 90 per cent of your field area.”

Each spring, a tractor or tractor/grain cart combination maneuvered on either side of the tramlines within the chosen swaths on each farm. Most of the selected swath area became covered in field traffic while the rest of the field remained free of traffic.

About eight weeks after the simulated traffic, the researcher collected 24 or 32 undisturbed soil core samples at each site, with traffic and without traffic. In the lab work months that followed, the samples were examined, weighed and measured with multiple tests. The samples from depths of zero to 15 and 15 to 30 centimetres were used to determine bulk density, porosity, particle size, texture, pore space and water holding capacity. 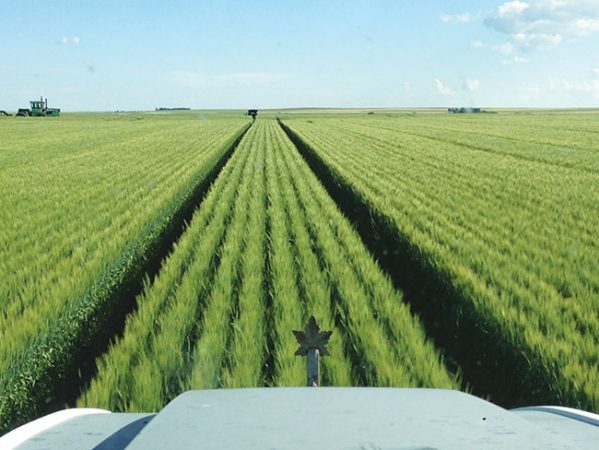 In more than half the Alberta sites, the study found soil physical quality improved with the CTF system.

“We saw a general improvement of soil porosity across the sites in the non-traffic soils,” Guenette says. “That’s important because it represents the majority of the soil in a CTF field.”

“We saw a general improvement of soil porosity across the sites in the non-traffic soils.”

Generally, the legacy CTF soils had significantly better water storage potential and better drainage potential. Where the sampled soils had no traffic, the soil could hold more water. There were shifts in pore size distribution. He wrote that the enhancements in untrafficked soils can lead to more ideal growing conditions, because better access to soil water in lightly compacted soils is better for a plant.

Big improvements in porosity were seen in the newer sites that were traffic-free for only three years. Porosity in the legacy sites, with four to eight years of being in CTF, was still better and improving, but the rate of change had slowed. In practical terms, he wrote, CTF should be used within large fields that are well drained and allow for long tramlines. That’s the ideal scenario.

Against that ideal, growers need to think about issues that may arise. He points to possible tramline rutting from continual usage, lost efficiency due to fixed tramline positions, complications in residue management and lost crop area (up to 17 per cent) if the tramlines are not seeded.

Guenette says, “Definitely, CTF is able to create a more uniform and consistent growing condition. However, other variables can greatly outweigh the soil improvement. Site-specific variability reduced what we saw. Year to year, conditions changed at each site. Over the whole project, there was an overall 2.2 per cent increase in yield and all the fields in favour of CTF. And remember, seven of the eight cooperators still are doing CTF.”

He adds, “Especially if we want to use it (CTF) here in Canada, we need longer studies, over 10 years, to try to get variability out of the equations. Then we can determine the actual changes it is causing.”

“The guys participating in the CTF study learned a lot,” Gamache says. “There’s evidence, in other parts of the world, that CTF does lead to increases in yield. Those changes are in the range of 10 to 15 per cent. We don’t know if that will happen in Alberta. Our study only went on for a relatively short time.”

“There’s evidence, in other parts of the world, that CTF does lead to increases in yield. Those changes are in the range of 10 to 15 per cent. We don’t know if that will happen in Alberta. Our study only went on for a relatively short time.”

During the study, crop emergence timing remained the same; weed counts did not reveal any population shifts.

Benefits beyond yield noticed elsewhere were also showing up in the Alberta experiments. For instance, growers rated the two systems on five factors: soil quality improvement, timeliness, resiliency, learning and continuous improvement. The CTF rated higher than conventional in all five factors.

“I’m talking about things like field efficiency,” Gamache says. “Controlled traffic is a very linear system using highly accurate GPS. Trackability is better in the field, so your ability to get back on when you’ve had a rain is better than you have in a random traffic situation. That’s one real plus.

“It sets you up to do precision things, like going in after emergence to apply something in-crop. You’re really accurate, you’re consistent.

“Another plus is that it sets you up to do on-farm research. You’ve already got tramlines and the potential for repeatability, both in the season and year to year. You can have three-year plots, if you like. You know exactly where you’ve been and what you’ve done. That’s a huge plus for guys that are inclined to field research and want to look at solid, reliable data for practices they try on the farm.”

Each farm and each year had its own variable rainfall, temperatures, weather patterns and soil types. Among the sites, the one with heavy clay soil had yields that were a little better than the others. Similarly, the one with irrigation and very dry, sandy soils had a disappointing response to CTF. Yield data on other farms was inconclusive.

“We looked at yields each year on the randomized plots and did some economics. Overall, we didn’t see dramatic yield increases,” Gamache says. “The guys weren’t going backwards; they were holding their own but, for adopting new stuff, you need some risk tolerance.”

“The guys weren’t going backwards; they were holding their own but, for adopting new stuff, you need some risk tolerance.”

In the CTF fields, soils had displayed up to 15 per cent more porosity and the volume of soil pore diameters had increased from 40 to 180 per cent.

The two concluded it may take several years for the benefits to soil physical quality to turn into observable improvements in crop yield when adding controlled traffic into a management system.