Tile drainage is more affordable and more attractive than ever in Western Canada, but it is still a major investment with many implications that should be considered before calling for tenders. 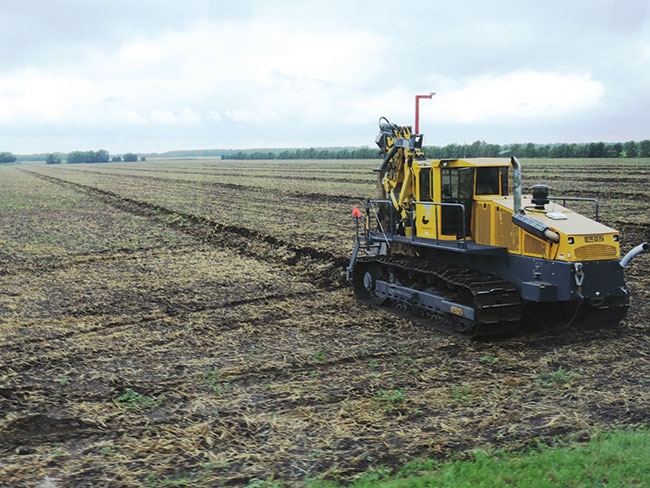 Tile spacing in action. Tile drainage is more affordable and more attractive than ever in Western Canada

Precision Land Solutions (PLS) general manager Garnet Peters gives marching orders to four crews and more than 30 workers who install tile drainage across Manitoba, Saskatchewan and Alberta. PLS, which is based in Winkler, Man., conducts both surface and subsurface drainage along with consulting services.

Tile drainage has been around as an option in some form since the Roman Empire. It’s been used in Eastern Canada for about a century and was demonstrated in Manitoba in the late 1970s but was slow to develop in the area.

When Peters was “new” to tile drainage, around 2005, only one or two companies in Manitoba were involved in tile drainage practices. Today, PLS is one of six contractors in the new Manitoba Agricultural Water Management Association.

“There are between 10 and 12 self-propelled agricultural tile plows performing work in Manitoba now,” Peters says.

That includes at least one farmer-owned self-propelled tile plow near the eastern slopes of Riding Mountain National Park, where tiling was first demonstrated in the area. In addition, the pull-type plow is also in use as a lower-cost option on some farms.

According to Peters, tiling installation cost depends on the design and what you’re trying to achieve.

“It’s like building a house: you get different benefits out of each project. Tiling probably ranges from $750 to $1,200 an acre right now, pipe is two-thirds of the cost for the typical tile project,” he says.

Drainage pipe is perforated, with diameters from three to 15 inches, and supplied in rolls. A geotextile filter is a common requirement so pipes don’t clog. Those installations are seen most often along the bottom lands of what used to be glacial Lake Agassiz.

Tiling has changed in the past decade, Peters adds. It began with a few potato farmers setting up drainage under circle pivot systems. Most systems today protect the entire field, and the crops above may be anything from potatoes to row crops to even wheat.

“Banks and Farm Credit Canada are very friendly toward tile. They love land improvement,” he says. “The value warrants it. Like a house renovation, you get more out of it than the renovation cost. The other benefit is that tile is 100 per cent tax deductible the first year as a land improvement.”

Return-on-investment (ROI) estimates depend on the crop value and the moisture cycle. However, producers have reported a one-year payback on the investment where a formerly saturated field produced a high-value crop.

For corn and soybeans, the payback is likely to be five-to-seven years, he says. For a cereal grower, Peters suggests a range of 10 to 12 years.

Comfort factor
Aside from the financial payback, producers are turning to tile as crop insurance.

“Farmers worry because it’s too wet for the crop. We get a lot of reports that producers love tile for their own emotional well-being. That’s the comfort factor,” Peters says. “When they see the rain clouds coming, if they have tile they know they are well equipped for that weather event. We get a lot of that from producers saying, I can sleep at night knowing my tile is there. That’s also a ROI, a sense of well-being, like buying insurance.”

Six considerations before investing
Mitchell Timmerman, agri-ecosystems specialist with Manitoba Agriculture agrees that interest definitely is rising in subsurface drainage, and that number of tiled acres in Manitoba has gone up dramatically in the past decade.

In a province that has relied heavily on surface drainage, Timmerman says, subsurface drainage has become more attractive due to a combination of factors.

“Subsurface drainage has always been a proven technology, but it seems more necessary today,” Timmerman says. “The payback potential is solid, depending on the details for a given farm.  It’s been wet for enough years that farmers realize they have been losing yield, and their yield variability is making it more difficult to budget and plan. Added up, the investment is more reliable and more justifiable than ever.”

No longer is tiling concentrated in historically popular areas and on the highest-priced land in the province. Timmerman has heard of tiling projects in nearly every farming region of the province in the past four years.

He says excess moisture is the most common and expensive claim through crop insurance, and is the most common reason for doing tile drainage. “Financing for this is certainly worth consideration in light of the potential payback,” Timmerman adds.

However, he says, tiling is a complex issue and is not a “cookie cutter” solution for every farm. For instance, it definitely has a better fit on gently sloping land. Producers need to take a hard look at their operations and evaluate beneficial management practices before jumping into installing tile drainage.

“This is a very site-specific practice. We urge farmers to look at the details and to make sure their service providers explain how the practice can be adopted in a proper way on their farms,” he says.

As a starting point, he suggests, ask yourself if excess moisture is your problem, and if it’s your only problem affecting yield performance. It may be a problem that’s shared with neighbours and a whole watershed.

“One of our main messages is to consider potential impact on neighbours. It’s about water quality and quantity impact downstream,” Timmerman says. “Tile drainage holds potential to mitigate some problems.  It’s up to the farmer to know the main pieces of information and thereby help mitigate the risks to land owners and to the watershed downstream.”

For instance, soil can be used as a place for water storage using what’s called controlled or conservation drainage. The water level in the soil can be managed so that a crop has extended access without rainfall or irrigation. On the other hand, any water management on your own land has a downstream impact. It may raise or reduce the peak flow, or stretch out the time that water is an issue downstream.

Timmerman suggests examining these six questions as a starting point:

“Tile drainage is an investment decision. It has to make money and sense. So, do some homework. Call us early and ask questions,” Timmerman concludes.