Watch out for herbicide carryover and injury after a dry 2018. 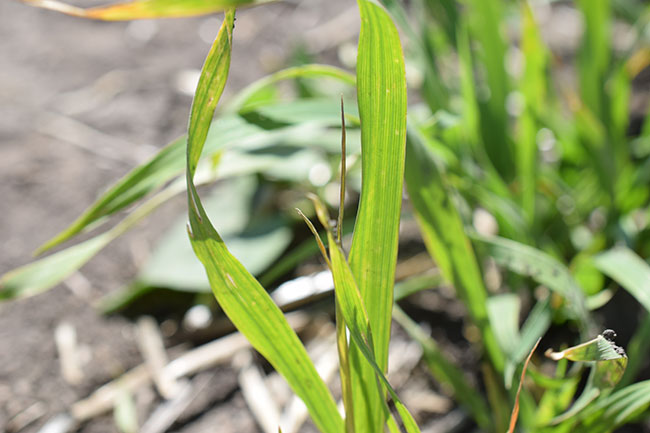 We’ve been here before. Farmers with a long enough memory will remember the droughts of the early 2000s when herbicide carryover – then mainly from Group 2 herbicides – impacted the following crop unexpectedly. Since then, research conducted by Agriculture and Agri-Food Canada (AAFC) and by herbicide manufacturers has helped to define the risk of unexpected herbicide carryover.

“Rainfall after application is key to herbicide degradation. The period from June through August is when most herbicide breakdown occurs because soil microbes break down herbicides and require adequate soil moisture and warm soil temperatures,” says Eric Johnson, who conducted herbicide carryover research when he was with Agriculture and Agri-Food Canada in Scott, Sask.

Generally, at least four inches (100 millimetres) of rainfall during this summer period is required to lower the risk of unexpected herbicide carryover and residual herbicides. Higher rainfall reduces the risk even more. Less than three inches of rainfall means a very high risk of carryover.

Some Group 2s (sulfonylureas) and Group 5 herbicides are degraded by chemical hydrolysis. Most other herbicide Groups with soil residue are degraded by soil microbial activity. Both mechanisms require adequate rainfall during the summer growing season; however, moisture requirements for hydrolysis to occur are generally lower than microbial activity.

Clark Brenzil, weed control specialist with Saskatchewan Agriculture, developed an Herbicide Carryover Risk Map for 2019. The map shows areas of concern where risk of herbicide carryover is greater than normally expected. It details what producers in each risk area should consider when selecting crops where residual herbicides were applied the previous year. The map can be found on Saskatchewan Agriculture’s website and is included below. 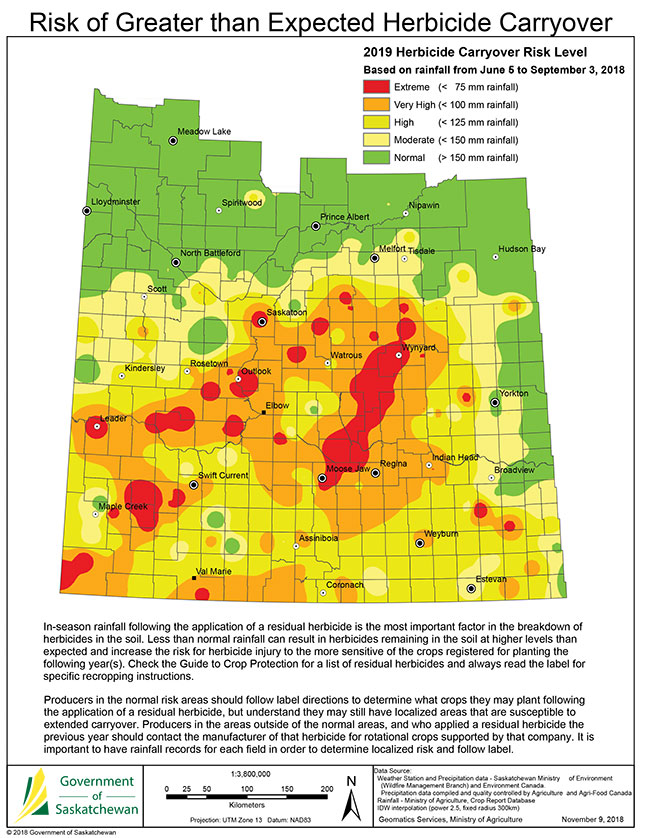 The map shows areas of concern where risk of herbicide carryover is greater than normally expected. Map courtesy of Saskatchewan Agriculture. 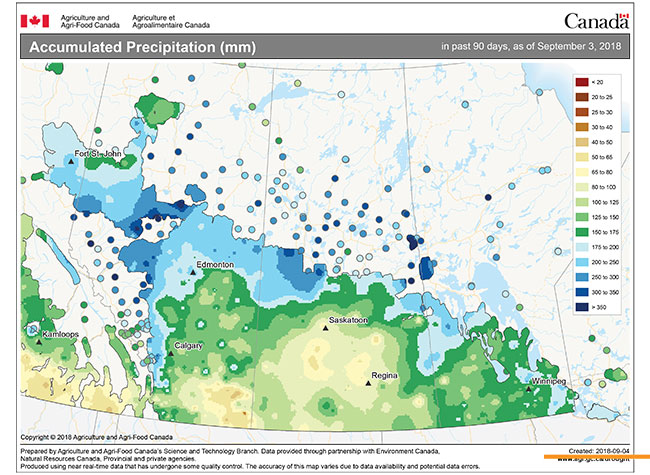 A larger scale map for the Prairies from AAFC can also help guide farmers in their recropping decision process. Large areas in southern Alberta, and a few pockets in Manitoba are also at risk.

Saskatchewan, Manitoba and Alberta Agriculture’s Guide to Crop Protection include a chart of residual herbicides and recropping restrictions. These restrictions are for ‘normal’ years with adequate rainfall after herbicide application. In dry years, these restrictions may not apply, and growers should consult with the herbicide manufacturer for further guidance if they received low rainfall in 2018.

For example, in areas that were dry in 2017, some growers experienced unexpected Odyssey (Group 2) carryover in 2018 on wheat even though wheat planted one year after Odyssey is generally safe with adequate rainfall.

Additionally, growers who have had two successive dry years may be at increased risk of ‘herbicide stacking.’ Small amounts of residual herbicides can build up over several dry years to cause unexpected crop damage as well. Again, consult herbicide manufacturers for guidance on recropping.