Traditionally, soybean (and corn) varieties have been based on crop (or corn) heat units (CHU) to determine suitability to growing regions. Researchers in Manitoba recently finalized the results of a three-year study initiated in 2011 to try to determine what factors were affecting maturity and yield in soybeans in different areas.

“We realized that relying on CHUs alone did not take into consideration other factors that make the variety decision more complex,” explains Dr. Aaron Glenn, research scientist with Agriculture and Agri-Food Canada in Brandon, Man. “In Manitoba and other parts of Canada, soybean varieties are also being rated on the U.S.-based relative maturity system or maturity groups. In the future, the use of CHUs is expected to be phased out for soybean variety ratings in Manitoba.”

The research project, funded by the Manitoba Pulse Growers Association, was conducted at eight locations across Manitoba for three years, from 2011 to 2013. Three recommended varieties of soybeans, one short-season and two longer-season, were grown at each location. All locations were generally planted around May 20, plus or minus five days.

“Over the three years of the project, the results showed that we could get reasonable yield and quality with all of the varieties with lower heat units than recommended,” says Glenn. “Although heat units are important for growing soybeans, it seems that there is a minimum amount of heat required for varieties to reach good yield and quality potential. Soybean plant growth is affected by temperature as well as daylength or photoperiod. Therefore, CHUs proved to not be the best measure, and including the maturity group rating system was a good addition.”

However, the results did show that as the varieties moved along the spectrum towards a longer season or 0 MG rating, they were more sensitive to photoperiod, and in the northern locations, did not reach maturity. “Although the longer season variety did take longer to mature at the northern sites, we believe there are likely other factors besides daylength, such as heat, soil conditions, nutrients, precipitation or other factors, that made a difference.”

When comparing results, researchers did not find any differences between the varieties at the Morden location. All the varieties had similar yields and quality, and all matured on average in 80 days after emergence. “We assumed that the longer season variety would yield higher at the Morden location, but that turned out not to be the case,” notes Glenn. “However, at the Roblin site, we did see some differences between the varieties. The 00 MG varieties performed the same, with yields similar to the Morden site. But the long-season or 0 MG rated variety did not reach maturity at Roblin and yields were significantly reduced.”

The study also provided some interesting findings on the impact of frost and the degree of maturity. “We compared crops that were harvested before and after frost and whether they were harvested at R8 or full maturity, or R7 with some green and immature pods,” says Glenn. “Overall there was little difference in yield, protein and test weight for crops harvested before or after frost. However, the oil content for all three varieties was 1 to 1.5 per cent higher when harvested prior to first fall frost. For cultivar 2 (2475 CHU. 00.7 MG), the 1000 seed weight was slightly higher when the crop was harvested at R8 vs. R7, while the yield of cultivar 3 (2525 CHU, 0.0 MG) was about 800 kg/ha higher for site years when the crop reached R8 vs. R7.” (See Table 2.)

Glenn also adds that in the three years of the study, the first fall frost was later than average.

At all locations, the results showed a significant relationship between total precipitation and yield, which was expected. Soybeans and other bean crops require moisture, particularly at the pod filling stage, to reach yield potential. There is also a correlation between higher precipitation and higher protein levels, which is likely related to greater nitrogen availability.

“When selecting varieties, use more than one criteria to evaluate maturity, don’t just rely on a CHU or maturity group rating,” says Glenn. “A good place to start is look at the results from the Western Manitoba Soybean Adaptation Trials and other [trials], [review] the Seed Manitoba guide and compare crop insurance data for different risk areas. Look at the varieties and see how long they take to mature relative to the check, and whether or not they actually reached maturity; and compare average yields over the last few years. Using multiple-year maturity data when available will give you a better indication on how a variety will mature with different growing seasons. Although variety trials may not be located close to your farm, evaluating enough locations and site years should provide a good idea of what will work.”

Overall, growers outside of the Red River Valley area should select shorter varieties proven in trials and rated at 00 or 000 MG. Varieties adapted to the non-traditional growing areas in western Manitoba, which has a similar growing season length and climate to other Prairie locations such as southeastern Saskatchewan and even central Alberta, will be better suited to these regions as well. “Even in the Red River Valley area…if seeding is delayed to early June, it is probably better to select a shorter season variety. Even if the yields aren’t quite as high as a longer season variety, the likelihood of reaching full maturity prior to fall frost increases.”

Glenn and colleague Dr. Ramona Mohr, also with AAFC in Brandon, have initiated another three-year study to look more closely at the impact of soil temperature at seeding. “Soils should be at least 10 C to get good, even emergence, no matter what the variety,” says Glenn. “Data from the U.S. suggests the warmer the better and 20 C is optimum, with the crop usually emerging into an even stand in four days.

“We want to determine how early we can plant soybeans on the Prairies and what the critical soil temperature is. Once the crops emerge, the maturity is predictable and maturity ratings are very applicable,” he adds. “However, the uncertainty is in predicting the time between seeding and emergence, which will depend on soil temperature and other factors. We will add the findings from this new study at the end of the three years to continue to help growers with selecting the best varieties on the Prairies.” 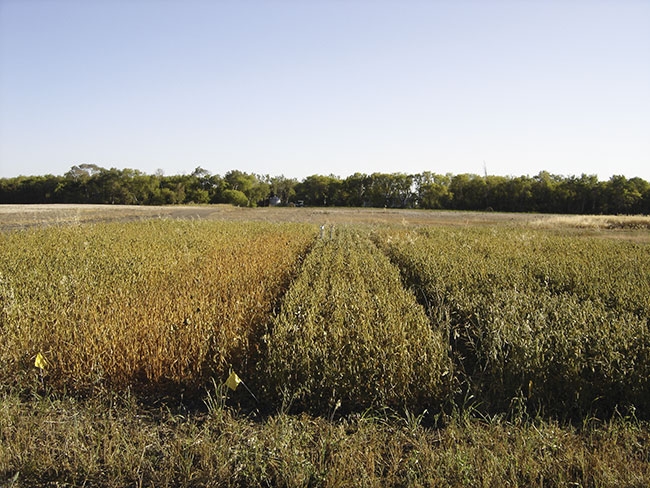