Research scientist Eric Johnson has been involved in agronomic research on carinata at Agriculture and Agri-Food Canada at Scott, Sask. His and other research is also helping generate a better understanding of carinata agronomics so that farmers will have a good handle on how to grow the crop once market development is complete.

Brassica carinata, commonly known as Ethiopian mustard, has been under market development and commercialization by Agrisoma Biosciences over the last several years, with some commercial production in 2012 and 2013. The plan was to contract about 25,000 acres in Western Canada in 2014; however, that was dependent on regulatory approval for feeding the meal to livestock. Approval was not received until June so contracts could not be offered. The approval to feed carinata meal to beef cattle will enable Agrisoma to offer contracts through Paterson Grain in 2015.

Agrisoma is commercializing its carinata line under the trade name Resonance, and is targeting a specialized biojet fuel as its market. Acreage is expected to grow now that regulatory barriers are overcome and the fuel is more widely adopted by the aeronautical industry.

Meanwhile, Johnson believes the crop has potential on the semi-arid Prairies.

“Carinata has some positive agronomics. It has good drought and heat tolerance, as you would expect from mustard, but that’s just an observation as we haven’t really compared it to other oilseeds. That research commenced in 2014. It is resistant to blackleg, and tolerant to Alternaria. It is shatter resistant, and is genetically diverse so there is a lot of opportunity to improve the genetics,” says Johnson.

From the ground up
Carinata has a large seed size with a thousand kernel weight similar to hybrid canola, around 6.5 grams. The large seed size allows better metering at seeding and more accurate seed placement.

Currently, Agrisoma has two varieties. AAC A100 is a consistent performer across the Prairies with a high number of branches and a medium height of 120 cm. AAC A110 has higher yield potential and is one day earlier than AAC A100. It also has 0.5 per cent higher oil content. Both are recommended for the mid- to long-season, semi-arid zones of Western Canada with maturity 12 to 14 days later than oriental mustard.

Certified Resonance carinata seed is typically treated with a dual insect and fungicide treatment, and is managed similar to canola or mustards with shallow seeding into a firm, moist seedbed. Johnson says flea beetles don’t like carinata as much as canola, but if there isn’t anything else around to eat, they will certainly eat it.

Johnson has done quite a bit of work on plant population density and seeding rates to establish a range for optimum yield. There is some variation by variety, but overall, carinata plant populations follow a similar curve as canola. His research shows that when plant populations drop below 25 plants per square metre, yield dramatically declines. Between 25 and somewhere between 116 to 180 (varietal difference), the maximum yield is reached, with yields subsequently declining with even higher plant populations.

In his research, Johnson achieved about 55 per cent emergence rate, which is a little higher than canola at around 50 per cent. To hit the optimum plant population for high yield, the seeding rate works out to about 225 to 300 seeds per square metre. Convert to pounds per acre, and the optimum seeding rate is about 11 pounds per acre. (See Fig. 1.) 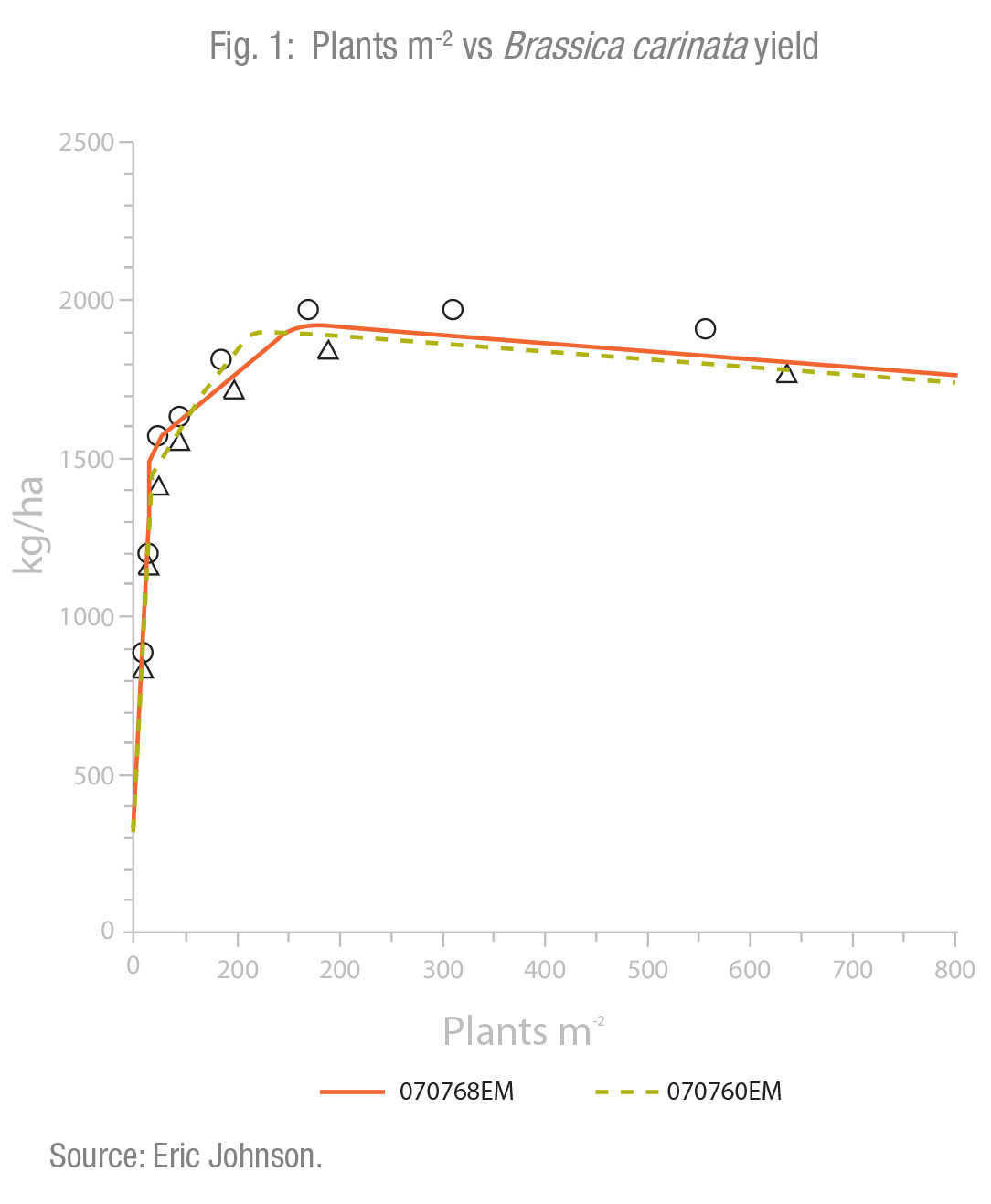 “I would like to see higher seeding rates because we can push maturity earlier by as much as seven days at those higher seeding rates and it is a long-season crop,” says Johnson. “We also don’t have good methods of weed control, but it is highly competitive so higher plant populations will help it compete more with weeds.”

Agrisoma recommends planting from mid-April to early May, depending on location. The earlier seeding helps the crop flower before the hottest part of the summer and mature before fall frosts.

Johnson’s research on nitrogen (N) fertilization found similar response curves as canola and other Brassica oilseeds. He found maximum yield at 189 kg N per acre, about equivalent to Brassica juncea.

“I think if a farmer asks how I should be fertilizing carinata, same as canola, same as juncea. They are all pretty similar,” says Johnson. “I’ve applied some economics to it, and if you have a low to medium soil test, about 80 pounds N would be your maximum return.” (See Fig. 2.) 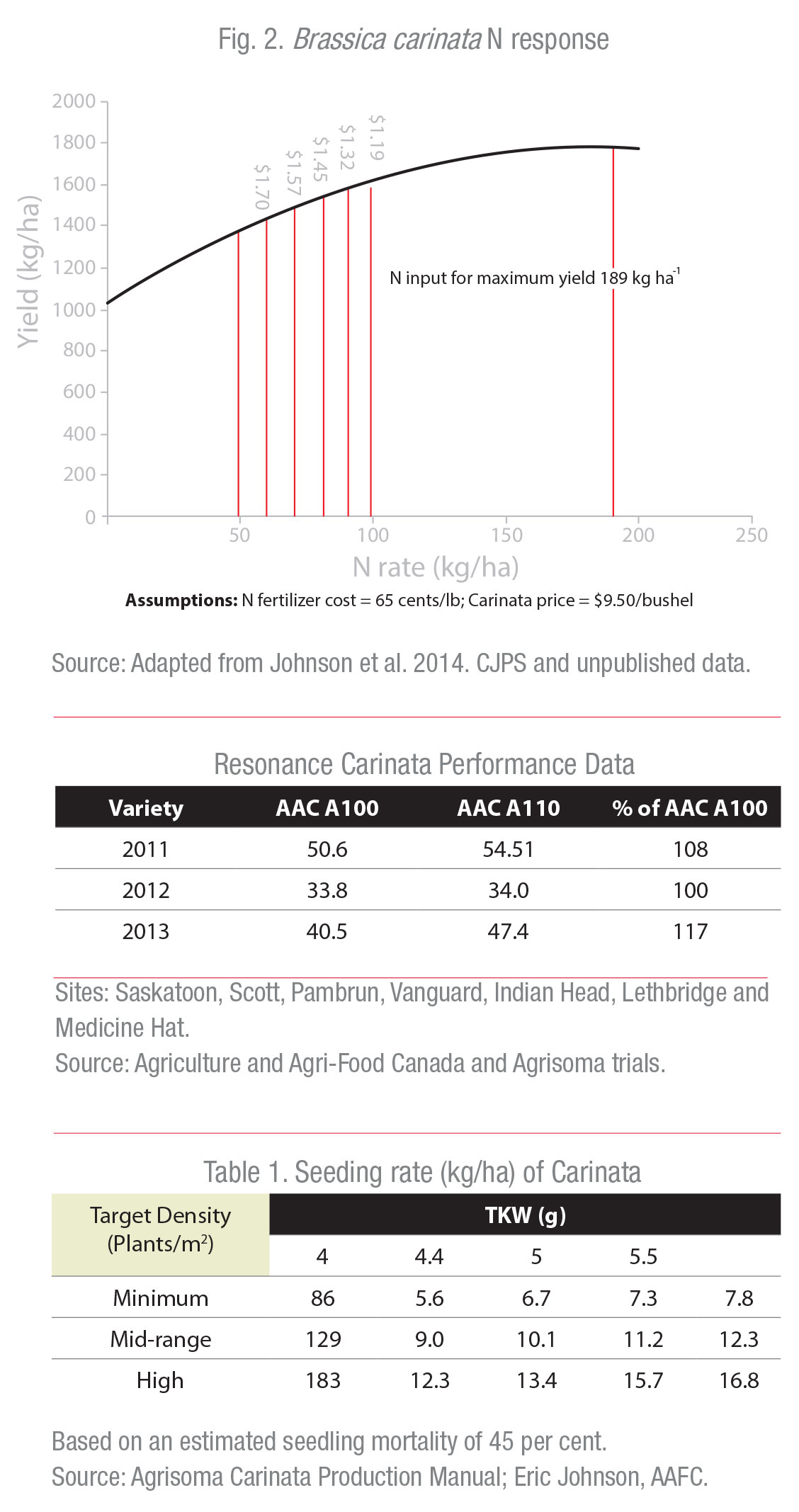 Weed control limitations
Few herbicides are registered on carinata, but expectations play a large role in carinata weed control. Weed control will never be as good as Roundup Ready or Liberty Link canola – the canola industry asked that glyphosate- or glufosinate-tolerant carinata not be developed so admixtures concerns were eliminated. However, farmers have become accustomed to clean fields from those systems.

“Even though carinata is highly competitive, farmers have very high expectations for weed control,” explains Johnson.

Like trifluralin, two other herbicides are registered on “mustards” although not specifically on B. carinata. Poast Ultra and Fortress are labelled for mustards, which technically means they can be used on carinata for grassy weed control.

Muster (ethamesulfuron) is registered, but has a narrow broadleaf weed spectrum including flixweed, green smartweed, hemp-nettle, wild mustard and stinkweed. Johnson has also conducted trials with Authority (sulfentrazone) with some success. A Minor Use application has been submitted for Authority.

“Sulfentrazone is a highly effective kochia killer, and carinata has reasonably good tolerance, but you’re going to have to use the low rate. You’re going to have to be careful as we do have injury problems if you get lots of rainfall,” explains Johnson. “This occurred in 2014, so more work is required on application timing and rate structure.”

Further down the weed control road, Johnson is screening some of the germplasm for tolerance to other herbicides, and is collaborating with other researchers (Dr. Kevin Falk, AAFC; Dr. Rick Bennett, Agrisoma; and Dr. Ravinder Grewal, Mustard21) on a seed and microgenesis (non-GMO) program to develop herbicide resistance in carinata.

Carinata is susceptible to aster yellows and sclerotinia stem rot. Johnson has observed that sclerotinia doesn’t hit carinata as hard as canola, possibly because of the plant architecture.

With good shatter resistance, straight combining can be a good option. Agrisoma reports the stalks can dry down slowly, so harvesting is easier when all crop material is dry before harvesting. If crop maturity is uneven, swathing at 25 per cent seed moisture content or lower is recommended to help dry down the crop. Seed moisture content of nine per cent or lower is the recommended harvest stage. 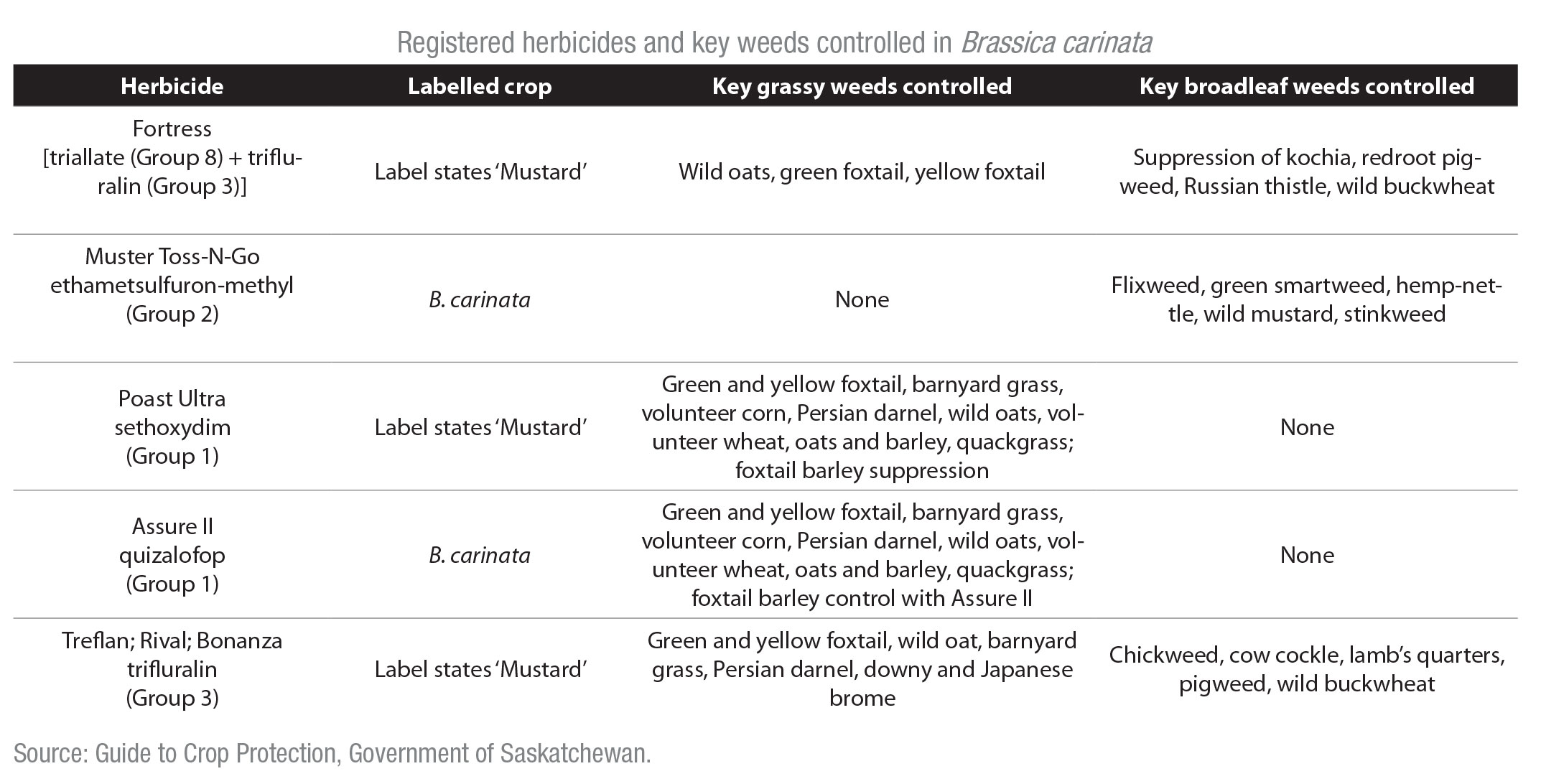