Despite soybean acreage pushing up to 1.3 million acres in Manitoba in 2014, researchers and growers are farming by the seat of their pants when it comes to this relatively new crop on the Prairies. With little made-on-the-Prairies research regarding phosphorus (P) fertility for soybean, growers have relied on research from other areas of Canada and the U.S. for P fertilizer recommendations.

“Growers will call me looking for a short answer on how to fertilize soybeans, but there isn’t one. It takes a longer explanation because soybeans are somewhat unique among the crops that we grow on the Prairies,” says John Heard, crop nutrition specialist with Manitoba Agriculture, Food and Rural Development (MAFRD) at Carman, Man.

Soybean is well known as a heavy user of P. The most recent estimates based on research from the International Plant Nutrition Institute (IPNI) is that a U.S. soybean crop takes up 1.1 lb P2O5 per bushel with 0.73 lb removed in the seed. For a 50-bushel crop, that’s 36.5 lb removed from the field at harvest.

Those numbers are similar to results from a 2005 Manitoba study, when Heard monitored a soybean crop from planting to harvest to assess nutrient uptake and removal (see Fig. 1). He says about 62 lb/ac P was taken up throughout the season and apportioned within the plant, with over 85 per cent of total P uptake eventually moved into the seed by harvest. The P removal rate in this study was 1.1 lb P2O5, which is higher than IPNI’s estimate of 0.73 lb removal. This removal rate is similar to canola.

Soybean less dependent on fertilizer P
One of the key differences between soybean and other crops grown on the Prairies is that soybean is less responsive to seed-placed or banded P fertilizer. U.S. research has found soybean responds well to broadcast P as well as banded P.

Additionally, soybeans are better at extracting P from the soil than other crops. Heard says research 50 years ago by University of Manitoba researchers Kalra and Soper, found that soybeans were much more efficient in extracting soil P than rapeseed, oats and flax, and less dependent on P fertilizer banding.

However, because soybeans are less dependent on P fertilizer doesn’t mean farmers should skip the P fertilizer application. With such high P removal by soybean, soil P levels may become depleted if farmers continually skip P fertilization during soybean crop years. Add other high P removal crops like canola and corn into the rotation, and the risk of depleting soil P levels is amplified, especially if removal rates aren’t matched with fertilizer applications.

Heard says soil fertility specialists are now recommending that P fertility should be balanced throughout the entire crop rotation rather than just looking at P fertility in each individual year. If the crops remove 150 lb of P over a four-year crop rotation, that 150 lb is reapplied as fertilizer over the four years.

This new approach recognizes that it is hard to match P removal with seed-placed P fertilizer due to seed sensitivity. Additionally, equipment limitations, lack of long-term rental agreements, and fluctuating fertilizer prices have contributed to an unbalanced approach to P fertility. (See Table 1.)

A balanced approach is important for all crops, soybean included. Research has shown that crops achieve higher yield on medium to highly P fertile soils than if a low P soil was fertilized. Research at the University of Minnesota showed that soybean yield was higher on soils with healthy P reserves. P fertilizer was applied to the previous corn crop on depleted and medium-high P soils. On the low testing soils, yield was increased with the P fertilizer; however these yields were still much lower than the yield on the high testing soils that received no P fertilizer (see Table 2).

Currently, Heard is part of a University of Manitoba study established in 2013 looking at P fertilization of soybean at 18 sites in Manitoba. Other collaborators are Gustavo Bardella, Yvonne Lawley and Don Flaten at the University of Manitoba, Dennis Lange at MAFRD and Cindy Grant at Agriculture and Agri-Food Canada. Three different rates of monoammonium phosphate (11-52-0) were applied at 20, 40 and 80 lb P2O5 per acre as seed-placed, side-banded or broadcast prior to seeding. Row spacing varied from seven to 14 inches, and opener type was either knife or disc. P fertility varied by site as well.

With two years of data in, the results are still up in the air, and somewhat contradictory to other research on soybean. Stand reduction due to seed row toxicity was low at 20 to 40 lb P2O5. This is contrary to most research that found that seed-placed rates at even 20 lb P2O5 could reduce plant stand and yield.

Another contradiction was that even in soils with very low soil P levels, such as 3 ppm Olsen P, soybeans were able to take up enough soil P to produce high yields without fertilizer P.

“These are certainly curiosities that we haven’t seen in other research. Part of it may just be the weather in the last two years. Other research has shown a distinct yield advantage on soils with medium fertility,” cautions Heard.

The University of Manitoba research is carrying on in 2015, so further information could shed more light on P fertility strategies for soybean. As more homegrown research develops, Heard says soybean growers should also heed advice gleaned from other areas and other crops. As far as P fertilizer placement goes, seed placement is likely the poorest option given the risk of seedling toxicity. Preseed band or side-banding may be the best option as it helps to delay tie-up of P in soils. Fall broadcast should be avoided as it may leave P exposed to run-off into water sources that can cause algae blooms on lakes.

Despite soybean being less responsive to fertilizer P, Heard suggests growers implement a balanced approach to P fertility within the entire rotation, and to use a soil test as an audit to check for P fertility. The long answer on whether P fertilizer is required in a soybean year is answered by many of the variables Heard has discussed.

“Based on our research studies, and there are up to 18 studies now in Manitoba, I can say that P fertility is important in soybean. I can’t say that you don’t need P fertilizer in the soybean year. It depends on your soil P fertility levels and your approach to a balanced P fertility program. You might get away with not fertilizing in a soybean year, but if you don’t replace that P removal, you will eventually deplete your soil of P, and that can hurt yields of other crops as well,” says Heard. 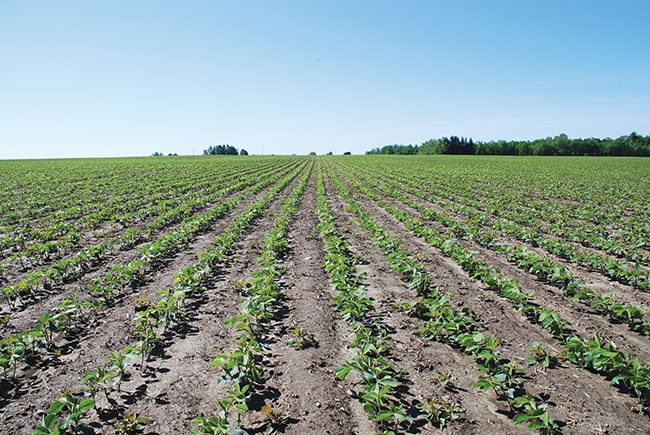 Do not neglect soybean phosphorus fertility. Growers have relied on research from other areas of Canada and the U.S. for P fertilizer recommendations.