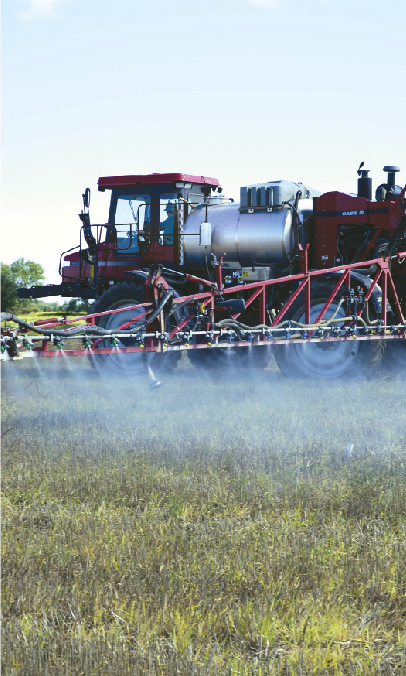 Ascochyta blight in field peas is a major limiting factor in producing high yields. While there are fungicides registered, the decision to spray, until now, has proven difficult. A new disease prediction model for ascochyta, developed by Ken Lopetinsky and Christy Hoy with Alberta Agriculture and Food at Barrhead, and Sheri Strydhorst with the University of Alberta, is now helping farmers assess disease risk so they can make a better spray decision.

“Before testing the model, I did spray for ascochyta, but was always concerned whether I was making the right decision,” explains Rick Mueller, a Barrhead area farmer and Alberta Pulse Growers’ vice-president who field tested the system during the last three years. “Working with the model, I could see that with wise use, you could get money back on the fungicide.”

Many pea growing areas with high rainfall are susceptible to ascochyta blight. Under moist, humid conditions, ascochyta symptoms appear as black or purple spots on the leaves, stems and pods, and crop lodging occurs. It can cut yields, cause premature lodging and, in some cases, reduced seed quality and germination.

The timing of application is critical because the fungicide will not kill the disease or repair damage that has occurred already. As a result, early application is necessary and spraying should occur before full canopy closure so that the lower stems and leaves receive fungicidal control. Adequate water volume and spray pressure are also important to success. However, even armed with this knowledge, the spray decision is difficult.

Lopetinsky first started to develop the model because he was puzzled that more farmers did not use a fungicide despite a proven track record for disease control and yield preservation. He had previously researched the fungicide Bravo and saw quite large differences in yields between treated and untreated pea fields.

“I looked at other prediction systems being used and thought that a similar tool might help give farmers more confidence in the spray decision,” explains Lopetinsky.

Lopetinsky and Strydhorst developed the scoring system in 2002, which took into account crop canopy, leaf wetness, disease symptoms and the five day weather forecast. They also recognized that the system had to be farmer friendly, fast and easy to use.

Subsequently, the Alberta Pulse Growers (APG) Zone 3 directors got involved, recognizing the need for a
prediction tool. With support of the APG and BASF, Lopetinsky worked with five co-operators from 2005 through 2007 to see if the scoring system worked, and whether the farmers got a return on their spray investment.

Lopetinsky says that all fields during the study period were selected for evaluation using the same criteria. All sites had high plant populations with a minimum of 75 plants per square metre, good weed control, uniform crop emergence and good nodulation in early June.

“The only way you are going to make a $25 per acre fungicide treatment pay is with a pay back on yield savings. Let’s say the treatment saves you 15 percent in yield. On an 80 bushel crop, you’ll save 12 bushels per acre, but if the yield potential is 40 bushels per acre, you’ll only save six bushels per acre. If you don’t have the yield potential, your pay back is going to be less and may not warrant spraying,” explains Lopetinsky. “From our perspective, the big thing is that the use of a fungicide to protect against disease is only warranted when the crop has a high potential to yield well.”

Plots were harvested, yields were measured and seed quality assessed. The prediction system scores exceeded 65 at all five locations in the first two years. The third year of data is still being assessed, but Lopetinsky says that similar trends exist in 2007.

The two years of data show significant differences between yields of sprayed and unsprayed plots in eight out of 10 cases. Based on an average of all site years, yields from fungicide treated plots were 21 percent higher than untreated plots. Generally, treated plots also had larger pea seed size.

At Mueller’s farm, the scoring system recommended spraying in each of the three years. Mueller found it
easy to use and gave him confidence in his spray decisions. “Before using the system, I sprayed in the wetter years but didn’t in the drier years.

I didn’t really know if that was the right decision.”

The 2007 spray decision that Mueller made is a perfect illustration of how the scoring system is of benefit. He used the scoring system, but did not think there was very much disease present. Still, he ended up spraying because of the scoring system recommendation. The day after spraying, the weather turned and was conducive to disease development.

“The fungicide timing was perfect. When you looked at the sprayed and unsprayed plots, the difference was night and day. That’s when I knew the timing was perfect,” explains Mueller. His final yield in 2006 was roughly 60 bushels per acre.

Lopetinsky hopes to have a finalized scoring system out in time for the 2008 growing season. He hopes it will be a one page brochure with the scoring system, spray recommendations and photo identification for the disease.

Tips for hitting top pea yields
Roger Andreiuk, Alberta Reduced Tillage Linkages (RTL) agronomist at Leduc, offers these tips on setting up a pea field for high yield potential. RTL has partnered with the Alberta Pulse Growers Association in many field demonstrations during the past several years to highlight the benefits of these good agronomic practices.

Do not bash your seed. High air-seeder fan speeds and dry seed can add up to damaged seed going into the ground, resulting in reduced germination. Consider reducing air speed, soaking pea seed with water prior to seeding, eliminate obstructions in the air delivery system, and handle seed gently all the way from the combine, through the cleaner and into the ground.

Throw away the square metre. Using a square metre or square foot tool to measure plant population can be misleading. Instead, count plants in individual rows and convert to plants per square foot.

Achieve good inoculation and nodulation. Andreiuk’s demonstrations also found inoculant mortality as the pea seed went through the air-seeder. Desiccation and heat are the biggest culprits in rhizobia bacteria death. He says to take care in applying inoculant to ensure the best bacteria viability. Research at Agriculture and Agri-Food, Lacombe, also found that granular inoculation was never worse and frequently better than seed applied peat and liquid inoculants.