Features Agronomy Canola Diseases
An addition to the clubroot toolbox 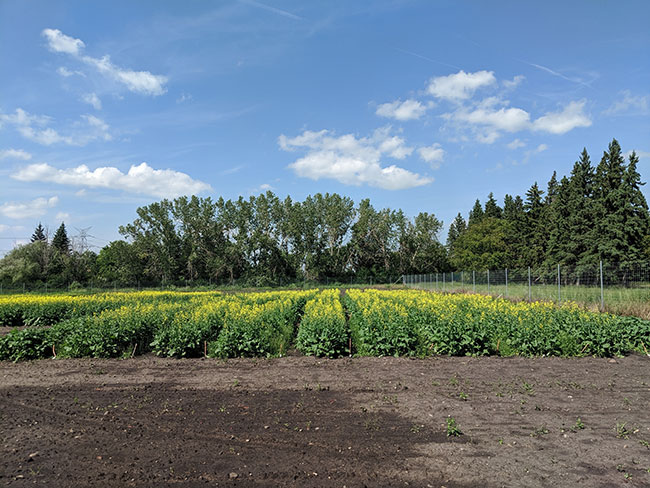 The field plots used at the trial in Alberta. PHOTOS Courtesy of Brittany Visscher.

In the pantheon of clubroot control strategies, any techniques that show the barest hint of promise deserve investigation.

Clubroot is a soilborne disease caused by the parasite Plasmodiophora brassicae Wor. One estimate reported in the Calgary Journal last year suggests the canola industry has lost $500 million in profits to clubroot over the last decade. Resistant varieties are available, but new strains are overcoming that resistance, says Stephen Strelkov, a professor of plant pathology at the University of Alberta. It’s clear that resistance on its own is not enough to prevent losses to clubroot long term.

Applying lime to increase soil pH has been used for years to limit clubroot severity in vegetable brassica crops like cabbage, Strelkov says. But until recently, no field trials had been performed looking at its efficacy in large-scale field crops like canola.

Strelkov has been working on various aspects of clubroot management for nearly 18 years. “We’ve been looking at different aspects, from its biology to the basis for resistance, and on the flipside, we look at ways to manage the disease and develop integrated strategies rather than just relying on genetic resistance,” he says.

“We know in general that clubroot prefers more acidic soils, so where the soil pH increases, the clubroot decreases. We had to see if [methods developed for other crops] work for canola and Prairie cropping systems.”

Strelkov is the lead on a new study that evaluated lime in combination with weed control strategies for its effect on clubroot severity and yield in clubroot resistant and susceptible canola cultivars. With masters’ student Brittany Visscher (then Hennig), who now serves as a research director for Alberta Canola, Strelkov published results from the study this spring.

As it turns out, lime shows more than a little promise for controlling clubroot in canola.

When hydrated lime was applied to increase the soil pH from initial values of between 5.2 and 5.5 to 7.2, clubroot severity decreased by 34 to 36 per cent in the clubroot-susceptible canola cultivar, while seed yield increased by 70 to 98 per cent.

However, in clubroot-resistant varieties, lime application or weed management did not have a significant effect on spore densities.

Study design and results
Strelkov’s team ran the study in Edmonton on one site in 2018 and two sites in 2019 in a naturally clubroot-infested nursery. They set up plots to compare the impacts of various combinations of clubroot resistance, soil liming and weed control on disease severity, yield and P. brassicae spore density. 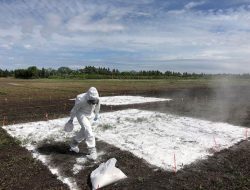 A study at the University of Alberta explored how effective lime is at controlling clubroot severity in canola.

“We were looking at a couple of different strategies and how they could be used in conjunction for clubroot control. Some weeds can serve as secondary hosts for the clubroot pathogen or cruciferous weeds so they could build up spore levels,” Strelkov explains.

The pre-treatment pH of the soil at the three sites was 5.3, 5.23 and 5.48 respectively. The team used an Alberta Agriculture liming guide to calculate rates to reach a target pH of 7.2 at each of the plots.

Weed-controlled plots were hand-weeded every two weeks after emergence, to ensure that no galls developed on susceptible weeds. No herbicides were used.

What the team found was that the application of lime and/or weed control had no effect on resting spore density in plots where resistant varieties were grown. “That makes sense, because those varieties develop low disease to begin with,” Strelkov says.

Interestingly, when weed control was used in conjunction with resistant varieties, there was a corresponding boost in yield, but weed control didn’t have an impact when used in conjunction with susceptible varieties. Strelkov says this could be because the plants in the latter plots were so sick they couldn’t take advantage of the reduced competition.

What’s the mechanism? Strelkov says the main effect of the hydrated lime is reduced infection of the host and reduced disease of the host.

“The reduction of spore levels is more likely not that the lime is killing the resting spores, but that you’re reducing the disease so much that you have fewer spores going into the air,” he explains. “The galls become completely full of resting spores, and when they decompose, the spores are released back into the soil, so any treatment that can reduce that symptom development will reduce the amount of spores going back into the soil.”

Management
Strelkov says the results show that hydrated lime could be used as part of a disease management package in tandem with resistant varieties. 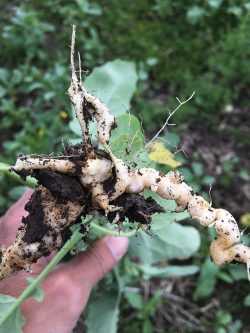 New strains of clubroot are overcoming even resistant varieties of canola.
Photo courtesy of Gary Peng.

But researchers can’t offer blanket recommendations for rates. Farmers will need to determine soil pH in order to calculate how much lime is needed.

Strelkov has heard reports of infested fields where lime application wasn’t effective, but he says those trials used fixed application rates. “We can’t truly say, ‘You should apply X amount of lime per acre,’ because what needs to be done on a field-specific basis is to determine the pH of the soil and how much lime to add, and this is critical, to increase the target pH to 7.2,” he says.

The pathogen, Strelkov says, is tolerant to a pH of six to seven. “[Below that], I wouldn’t expect you’d see enough of an effect, so it’s critical to bring it to that level. That would be one caution,” he says.

He adds that though the study’s findings were consistent, other factors, such as rainfall and application timing, can sometimes influence results. More research is needed before fine-tuned recommendations can be made for farmers.

Visscher notes that when applying lime for clubroot, the Canola Council of Canada currently recommends using the strategy as a patch management approach. “Optimal clubroot management requires a higher pH (7.2) than what is required for optimal nutrient availability (6.5),” she says. “Patch management can increase the precision in measuring soil pH to avoid over-applying lime, and makes it a more economical option for farmers dealing with clubroot.”

There’s an important distinction to be made between lime and calcium products, she adds. The two types of products are not the same. “Liming products have carbonates, oxides, and/or hydroxides of calcium [and] magnesium. They can acutely increase pH in a short time, while a product like calcium sulfate/gypsum slowly increases pH over time. Patch management applies to liming products – not calcium products.”

While the lime research goes on, Strelkov and his team are also working on the clubroot resistance angle.

Strelkov, with collaborator Sheau-Fang Hwang, are leading a new $1.25-million project funded by BASF to identify new sources of resistance. During the project’s five-year span, the researchers will look at 30 varieties of canola and its close relatives to find new resistance genes.