Better winter field survival is a central goal of Prairie winter wheat breeders. However, over the last few decades, making gains in this trait has been very challenging. So a team of researchers is deciphering the genomics of winter survival to further advance the development of varieties that survive and produce good yields no matter what the winter weather is like. 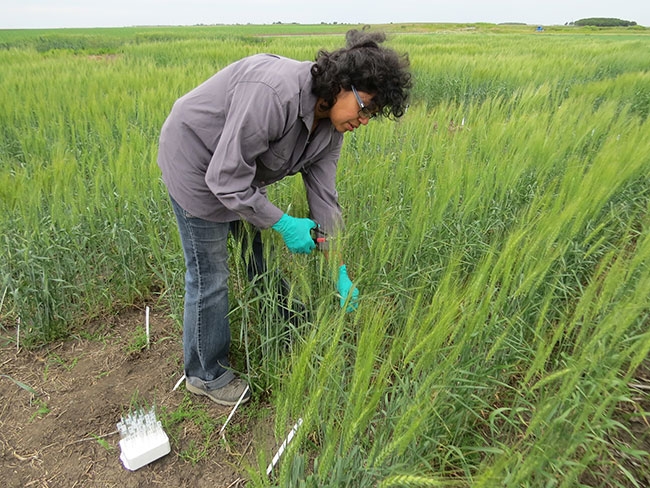 “Norstar is still the gold standard for winter hardiness in winter wheat varieties. It was developed by Agriculture and Agri-Food Canada at Lethbridge back in 1977,” notes Ravindra Chibbar, a professor in the University of Saskatchewan’s department of plant sciences, who is leading this research. “When we started this project, we said if we can develop winter wheat plants that exceed the winter field survival of Norstar then we will consider that we have made a contribution.”

Chibbar identifies two possible reasons why advances in winter field survival have been so difficult. “One is that there may not be enough genetic diversity in the winter wheat germplasm available in Canada. The second factor could be: have we looked at winter survival carefully?”

Through more than a decade of research, Chibbar and his colleagues have developed evidence to show that their hypothesis has a scientific basis. “It is well known that most of the genes controlling low temperature tolerance and vernalization [a plant’s requirement to experience cool temperatures before reproductive growth can occur] in wheat are located on chromosome 5A,” he says. “But we published a paper in 2009 where we showed that regions on other chromosomes also contribute to winter survival.”

In the current five-year project, the researchers are focusing on three key developmental traits: prostrate growth habit, final leaf number, and first internode length. They are working to identify the combination of genes contributing to superior winter survival through these three traits and improved low temperature tolerance. They are also developing DNA markers so breeders will be able to screen their breeding materials for the genes of interest and their combinations.

Although winter wheat is the project’s primary focus, the researchers are also working with fall rye. Chibbar explains, “Some rye cultivars are more cold hardy than winter wheat, so it is a good model for a very cold hardy cereal. Although when rye is crossed with wheat to get triticale, it never has the cold hardiness of the rye parent, we can use comparative genomics to determine what makes rye more winter-hardy than wheat. Additionally rye can be used to confirm some of the new hypotheses that we have developed using winter wheat. Our ultimate objective is to duplicate in winter wheat what we have found in rye.”

In one component of the project, Båga is making winter wheat recombinant inbred lines. Such lines are very useful for mapping traits of interest in a plant’s genome because the set of inbred lines captures almost all the genetic diversity available in the original cross between the two parents. Each line is developed by single-seed selections from individual plants for several generations; the plants in different lines are essentially genetically identical to each other with minute changes.

Chibbar says, “The strategy we are taking is to make recombinant inbred lines where there are minute changes in the chromosomal regions of interest. With the help of molecular markers, we analyze the lines to precisely identify the genetic changes in individual lines. The final stage is to determine which of those changes improve winter survival.”

So the research team has been conducting field trials with these recombinant inbred lines, other winter wheat lines and cultivars, and fall rye lines and cultivars for the past four years at Saskatoon, Lethbridge and Vauxhall, to assess winter survival. As well, they are growing the more promising lines in field plots to collect data on grain yield and quality.

The team has already evaluated hundreds of winter wheat and fall rye lines. “Identifying which lines have the best winter survival depends on how severe the weather is, which we can’t control,” he notes. To reliably identify the best lines, they need data from at least three severe winters. They’ve had two such winters in previous years, allowing them to identify some promising lines that have performed equal to or better than Norstar. They are hoping the winter of 2017-18 has provided the conditions needed to confirm their findings.

As well, the researchers are collecting data on the three developmental traits in the different lines in the field and greenhouse. For the lines that have shown strong winter survival in the field trials, the team will be using a programmable freezing chamber to determine the LT50 temperature – the temperature at which 50 per cent of the plants die from the cold. “LT50 is a precise measure of low temperature tolerance; therefore it can also help in understanding the contribution of low temperature tolerance to winter field survival.”

The researchers are continually working to more precisely locate the regions on the winter wheat genome related to improved winter survival and to refine the markers associated with these locations. The team also includes a graduate student, Hirbod Bahrani, who is genotyping the fall rye materials, identifying genomic regions related to rye’s winter survival, and working on markers associated with those regions.

Win-win benefits to growers
According to Chibbar, the results from this research could help Prairie crop growers in several ways.

“Winter wheat’s yield potential is about 20 to 30 per cent higher than spring wheat’s. However, at present, producers cannot consistently achieve that higher potential because winter survival is not consistent. If we can develop varieties that are highly winter hardy, then producers can achieve higher yields,” he says.

The researchers also believe the acres seeded to winter cereals will likely increase as the portion of the Prairies suited to winter cereal production spreads northward, if the climate warms as predicted. As well, since climate patterns are expected to become more erratic in the future, the Prairies will likely have more frequent and more intense freeze-thaw cycles with warm spells that remove the insulating snow cover followed by bitter cold spells that stress the plants. “If we can increase the crop’s cold hardiness, then it should also be able to better withstand these freeze-thaw cycles,” he explains.

Chibbar also points out that winter wheat and other winter cereals are some of the most environmentally friendly crops. “Winter cereals are able to use the very early spring moisture from snowmelt. As well, they tend to require fewer inputs [of herbicides and fungicides]. They grow fast and outcompete the weeds. And the winter crops mature earlier than spring cereals, so they sometimes avoid diseases like Fusarium head blight. Added advantages are that winter cereals prevent soil erosion in the fall and early spring, and provide spring cover for ground-nesting birds,” he says.

“So for producers, growing winter wheat is a win-win situation [economically and environmentally] – if they can consistently produce the crop. Therefore the project’s main goal is to increase cold hardiness and combine that with selected developmental traits to increase winter survival and stabilize yield to develop a ‘climate change-resilient’ winter wheat.”