The release of midge tolerant durum is the culmination of years of work by many scientists and their staff. So says Dr. A.K. Singh, better known as Danny Singh, who was the lead research scientist and durum plant breeder at the Semiarid Prairie Agricultural Research Centre (SPARC) at Swift Current, Sask., right in the heart of durum country at the time the first solid stem and midge tolerant durum varieties were approved for registration in 2012 and 2013 respectively.

Singh, who recently left Agriculture and Agri-Food Canada (AAFC) for a position as a plant breeder at Iowa State University, says developing midge tolerant characteristics in durum was an ongoing effort for many years.

DT833, recently named AAC Marchwell VB, is Western Canada’s first midge tolerant durum. “The source of the resistance, the Sm1 gene which confers the tolerance to orange blossom wheat midge, was moved into durum by Dr. Julian Thomas,” explains Singh. Dr. Julian Thomas, now retired, worked at AAFC in Lethbridge and most recently in Winnipeg at the Cereal Research Centre (CRC). Thomas, working collaboratively with Dr. John Clarke, another eminent breeder in Western Canada and also retired, successfully moved the Sm1 gene from hexaploid wheat into durum. It was one of these lines that was used in a cross with Strongfield that eventually led to AAC Marchwell VB.

“The original cross was made in 2004,” explains Singh. “Dr. Ron Knox, a biotechnologist and pathologist and a key member of the SPARC team, then used various molecular tools to select for the midge tolerant gene in early generations. The line was then progressed through regular cycles of breeding and was fast-tracked one year early into coop trials in 2009.”

Singh notes that although AAC Marchwell VB was entered into co-op trials in 2009, because of the bad crop of 2010, the line was tested for four years, not the usual three. “This line is an example of the extent of collaboration in the public breeding process, involving the wheat group at SPARC and the CRC in Winnipeg and private seed companies,” he says. “Ian Wise, entomologist at CRC, did all the midge screening to ensure the line had the Sm1 gene, it was functional and the line exhibited midge resistance.” AAC Marchwell VB is distributed by SeCan, and Certified seed will be available for spring 2016 seeding.

Another plant breeding breakthrough from SPARC came with the registration of AAC Raymore, “the first ever solid stemmed durum which confers resistance to wheat stem sawfly and was bred using doubled haploid technology,” says Singh.

Singh says pure breeding experimental lines can be achieved in one breeding cycle by causing chromosomes of the female ovule or the male pollen to double and produce a fertile plant in a technique known as doubled haploidy, thus reducing the time to produce a pure breeding line by five generations.

In 2004, 139 doubled haploid genotypes from the AAC Raymore-originating cross were grown near Swift Current under irrigation and 214 genotypes were grown near Leeston, New Zealand. All were selected for plant diseases, plant height, straw strength and maturity. In total, 137 genotypes were harvested as a seed source for agronomic trials in Canada.

In 2005, the genotypes were grown under dryland conditions at Swift Current and Indian Head, Sask. and at
Lethbridge, Alta. Of these, 15 were chosen based on agronomic performance, disease resistance and quality. By 2007, DT818 (AAC Raymore) was entered in the durum-B test, and from 2008 to 2011 the durum co-operative test. A fourth year of testing was necessary because no quality testing had been performed in 2010 as a result of poor quality samples from the co-op tests that year. In 2011, DT818 was grown in a specialized sawfly nursery and the stems were split to record the expression of solidness.

According to Todd Hyra, western Canadian business manager with SeCan, distributor of AAC Raymore, the variety “has some real magic in it. Not only is this the first solid stemmed durum to be registered, its stems are very solid. I’ve never found a hollow stem yet in all the fields I’ve checked,” he says.  “It’s not like spring wheat where the solidness is more dependent on environmental conditions.” AAC Raymore will be available in the fall of 2014 for spring 2015 seeding.

Singh stresses that plant breeding is a long-term effort, one that needs to be sustained by human and financial resources as well as infrastructure. “The wheat breeding staff at SPARC is respected worldwide for their innovation and dedication towards agriculture and developing better wheat varieties as well as conducting leading edge research,” he says. At SPARC, funding has come from government, both federal and provincial, with partnership from farmers through the Western Grains Research Foundation, and from companies such as SeCan, Viterra and others. 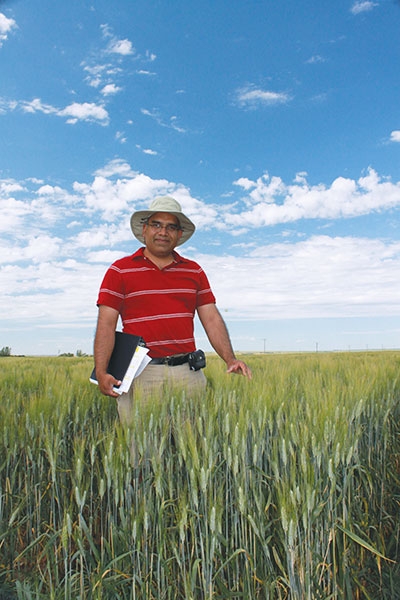 Dr. A.K. (Danny) Singh The release of midge tolerant durum is the culmination of years of work by many scientists and their staff.