Research trials in 2013 confirmed an unexpected finding: a rotational break of more than two years away from canola provides a significant yield benefit for clubroot-resistant canola cultivars. 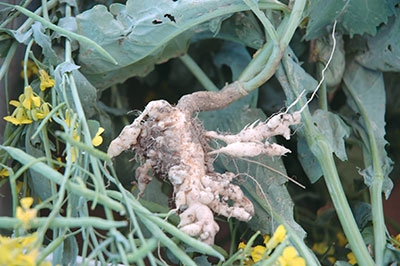 Research trials in 2013 confirmed an unexpected finding: a rotational break of more than two years away from canola provides a significant yield benefit for clubroot-resistant canola cultivars.

Clubroot is caused by a soil-borne pathogen that affects canola and other cruciferous crops, such as mustard and cole crops, and cruciferous weeds, such as stinkweed. The disease causes large swellings on plant roots. These swellings hamper the plant’s ability to move water and nutrients to its upper parts. In susceptible canola cultivars, yield loss can reach 100 per cent in severely infested fields.

“When we first started these trials in 2011, crop rotation wasn’t really our focus. We were mainly looking at rotation as a possible means to help two treatments for managing clubroot in canola. One was a biofungicide seed treatment. The other involved using a moderately susceptible cultivar to mimic the situation in which a cultivar’s resistance to clubroot was partly eroded; we wanted to see if there would be some value to using such cultivars under reduced disease pressure conditions,” notes Dr. Gary Peng, a research scientist with Agriculture and Agri-Food Canada (AAFC) in Saskatoon, Sask.

Before these trials, there had been a misconception that crop rotation would probably not be very effective in clubroot management because the pathogen’s resting spores can survive in the soil for up to 17 to 20 years.

Fortunately, the study site offered a unique opportunity to combine crop rotation with the study’s two main treatments. Peng explains: “It is not easy to find field plots with a high level of uniform clubroot infestation, and to also have different crop rotation intervals. But AAFC’s research farm in Normandin, Que., has a seven-acre field that has had clubroot since the early 1990s. They have been doing annual tillage in that field, so the pathogen is well spread all over the field. And they had been running crop rotation studies in that field for 11 years before we started our trials.”

Previous research had estimated the clubroot pathogen’s half-life to be about four to five years. The half-life is the number of years it takes for enough of the pathogen population to die off so it causes only 50 per cent of the original disease severity, based on a bioassay. So Peng thought a three- or four-year rotation might somewhat reduce the pathogen level, which might help in managing the disease with other partially effective measures.

The initial trials ran from 2011 to 2012. Peng’s research team assessed four rates of the seed treatment with a Bacillus subtilis biofungicide in combination with a one- or three-year break from canola, to represent a two- or four-year crop rotation interval. Additionally, the researchers compared three canola cultivars: a clubroot-susceptible cultivar, a moderately susceptible cultivar and a resistant cultivar (45H29). These cultivars were evaluated under five rotation treatments: back-to-back canola, and a one-, two-, three- and four-year break from canola. For all plots, fertilizer applications were based on soil tests, and all other agronomic practices were uniform across all the plots.

Clubroot pathogen populations were measured using a technique called qPCR. This technique gives the exact number of spores per gram of soil, so it’s much more accurate than the bioassay technique used previously to estimate the pathogen’s half-life.

Surprisingly, only the rotation interval made a difference to canola yields and clubroot pathogen populations. Neither the biofungicide nor the moderately susceptible cultivar had much of an effect.

Surprisingly, only the rotation interval made a difference to canola yields and clubroot pathogen populations. Neither the biofungicide nor the moderately susceptible cultivar had much of an effect.

The results from the initial trials suggested a possible reason why the resistant cultivar didn’t reach its full yield potential in the back-to-back and one-year break plots. “In some other pathogens or disease situations, there is what is called a physiological cost to the resistance if a high level of the pathogen inoculum is present. Although the host expresses the resistance, it does have a physiological cost and that could affect certain growth aspects of the host plant, which might reduce yield potential in this case,” explains Peng.

In 2013, to investigate this hypothesis, Peng conducted trials at the same site, using the same rotation interval options as in 2012. But this time he compared three different clubroot-resistant cultivars in two trials seeded one week apart.

The results for the three resistant cultivars followed the same pattern as the results for 45H29 in the 2012 trials, with a significant yield increase after the two-year break from canola. Yields for all three resistant varieties in the back-to-back canola and one-year break plots were about 22 to 29 bushels per acre, while yields from the longer rotation intervals were 34 to 43 bushels.

“In fact, the yield increase [after the two-year break] was even more dramatic in the 2013 trials than in the earlier trials – the increase was around 30 to 58 per cent, depending on the variety. That’s really astonishing,” says Peng. “So it is clear: a longer than two-year break from canola reduces the pathogen population. And with that reduction, yield benefits can be realized even with a resistant cultivar, and across all the varieties we’ve tested so far.”

Based on his research, Peng offers three tips for canola growers with clubroot-infested soils. These are the three most practical things growers can do to alleviate the pressure of clubroot.

“First, use a resistant cultivar. It is the cornerstone of a clubroot management package.

“First, use a resistant cultivar. It is the cornerstone of a clubroot management package.

“Second, use measures for the stewardship of clubroot resistance. That’s where crop rotation helps. I know crop rotation is a bit of a hard sell to a lot of growers mostly due to the economic situation they are facing. But if they can manage to do a three-year rotation, it certainly helps.” That two-year break from canola is crucial to dramatically reducing the pathogen population, to maximizing yields of the resistant cultivars, and potentially to prolonging the resistance in these cultivars. It also helps manage blackleg.

“And third, because clubroot doesn’t do well under cool soil conditions, it helps if growers can seed a bit earlier; most growers are doing that anyway.”

Research is underway at AAFC and various seed companies to develop additional clubroot resistance sources. Peng’s team is making progress on this: “We have identified several resistance genes, and are in the process of verifying their functions to identify potentially novel ones.”

For now, Peng thinks that if canola growers in clubroot-infested areas follow the three-pronged strategy – using resistant cultivars, using a rotation with at least a two-year break from canola, and seeding early – they should be able to manage the disease effectively.