April 15, 2019
By Agriculture and Agri-Food Canada

During particularly wet and rainy conditions – like the ones experienced across many Canadian farm fields in 2018 – some species of fungi thrive and produce toxins that contaminate wheat, barley, and corn. One of the most common fungal toxins affecting these grains is deoxynivalenol (DON). 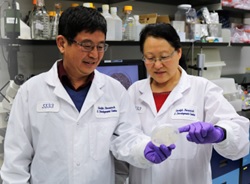 Once contaminated with DON, grain is difficult to detoxify because DON is resistant to heat treatment and regular processing methods.

In addition, grains contaminated with DON are unfit for human consumption. Grains contaminated with small amounts of DON can be used as food for ruminants, like cows, but higher levels make the grain toxic for animals as well, resulting in illness and weight loss. Either way, grain contaminated by DON represents an economic loss for farmers in both domestic and international markets.

“Vomitoxin, or DON, has been a serious issue for corn and other cereal crops for a long time,” says Agriculture and Agri-Food Canada (AAFC) scientist Dr. Ting Zhou. “With no satisfactory solutions, we decided to try a new and creative approach.”

What they discovered is a new bacterial species in soil that produces two enzymes that converts DON to a non-toxic form. The AAFC researchers’ innovative approach to convert DON by biological methods provides a viable route to detoxify DON at different stages of harvest. With several possibilities for both the delivery method and application, this could significantly reduce/eliminate the negative aspects of DON to various industries.

“The DON detoxifying bacterium and enzymes provides an innovative technology to solve this persistent and devastating problem. They can be applied in both pre- and post-harvest treatments to effectively reduce DON contaminations, which is new, ” Zhou says.

Compared with previous discoveries of bacteria that can detoxify DON contaminated grain, the new bacterium is better because it doesn’t necessarily need DON as a food source to grow, it can grow at lower temperatures, and can grow in the presence of oxygen. This makes it well suited to industrial applications as there is potential to add the bacteria, or just the two purified enzymes, to harvested grain in storage to reduce contamination to levels acceptable for animal feed.

This research serves as a foundation for the development of a feed treatment to detoxify DON, particularly in liquid-feeding systems, to levels acceptable across the board.

Th next steps are to partner with industries in order to develop commercial products (microbes and enzymes) to combat this ongoing problem. This AAFC innovation provides great opportunities for the future of DON mitigation.