Agriculture and Agri-Food Canada researchers have discovered a new bacterium in soil that could provide the key to neutralizing the disease. 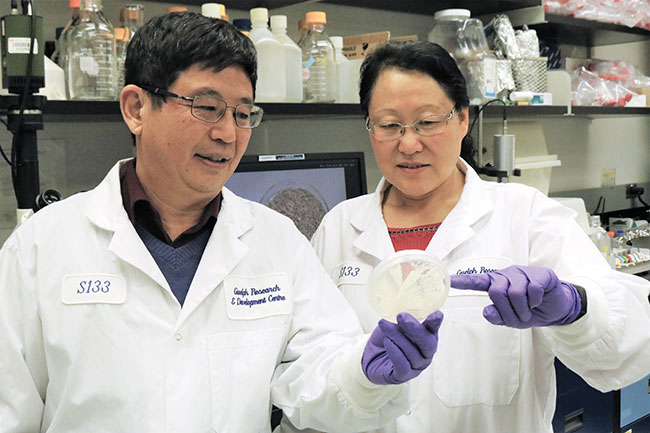 DON is produced by a number of fungal pathogens, most commonly Fusarium graminearum, which can cause Fusarium head blight in cereal crops and Fusarium ear rot in corn. The mycotoxin can cause serious yield losses in infected crops, and makes contaminated grains unfit for human consumption. In Canada, grains contaminated with small amounts of DON can be used as food for some types of livestock, but higher levels make the grain toxic for animals as well. This means farmers with grains containing high levels of DON could have their crop subjected to deep discounts or even rejected altogether by grain processors. Infected corn can be used to make ethanol, but dried distillers grain, a byproduct of the production process that is a popular feedstuff for livestock, may not be saleable if it contains high levels of DON.

For years, researchers around the world have been searching for a solution to the problem, but because the DON mycotoxin is resistant to heat treatment and there are currently no satisfactory processes for effectively and economically detoxify DON-contaminated grain, it has proven to be very challenging.

Now, AAFC researchers working at the Guelph Research and Development Centre in Ontario have discovered a new species of bacteria that could provide the key to detoxifying DON.

“DON has been a serious issue for corn and other cereal crops for a long time,” says Ting Zhou, the AAFC scientist leading the DON research program.

“The disease is very difficult to control. There has been so much effort, so much research already done, but the problem is still severe and even worsening in recent years,” he adds.

“We needed to find something new, something that was kind of out of the box. We thought maybe we should use a biological approach because it is green and sustainable. We started looking for microbes that may be able to degrade or detoxify DON.”

“We needed to find something new, something that was kind of out of the box. We thought maybe we should use a biological approach because it is green and sustainable.”

Zhou says several other researchers, including Jianwei He, Yousef Hassan and Jason Carere, have played an important role in the research, leading to the discovery of a naturally occurring, soilborne bacterial species named Devosia mutans that is capable of detoxifying DON.

The bacterium, which was found in an alfalfa field in southern Ontario, produces two enzymes, DepA and DepB, which convert DON to a non-toxic or a much less toxic form by altering the molecular structure of deoxynivalenol.

Zhou says besides helping to inhibit DON toxicity in the field, the enzymes may also be able to detoxify harvested grain that is contaminated with the toxin.

“The DON detoxifying bacterium and enzymes provides an innovative technology to solve this persistent and devastating problem,” he says. “They can be applied in both pre- and post-harvest treatments to effectively reduce DON contaminations, which is new.” 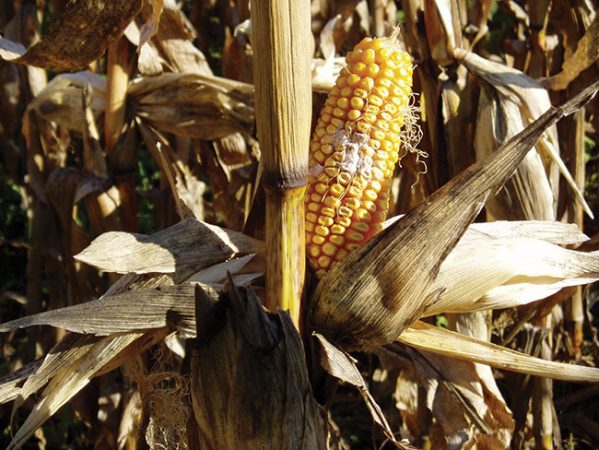 Zhou notes that other bacteria capable of degrading DON have been found, but this is the first time that bacterium enzymes responsible for detoxification have been identified.

He adds that unlike previously discovered bacteria, Devosia mutans doesn’t need DON as a food source to grow, it can grow at lower temperatures, and it can grow in the presence of oxygen. Zhou says that makes it well-suited to a variety of industrial applications in areas such as livestock production, corn milling and fuel ethanol fermentation.

The detoxifying enzymes, for example, could be used to treat harvested grain to reduce DON contamination down to levels that are acceptable for animal feed, or they could be incorporated into production lines at animal feed processing plants to significantly reduce the amount of DON in feed products leaving the facilities. Zhou says the enzymes may also have applications at the farm level, where they could be applied directly to animal feed.

The detoxifying enzymes, for example, could be used to treat harvested grain to reduce DON contamination down to levels that are acceptable for animal feed, or they could be incorporated into production lines at animal feed processing plants to significantly reduce the amount of DON in feed products leaving the facilities.

Zhou maintains there are also opportunities to utilize microbial detoxification from a crop management perspective, by utilizing the Devosia mutans bacteria or the DepA and DepB enzymes in new forms of seed treatment that target DON or even as a soil amendment. He believes the genes from the DON-detoxifying bacterium could also possibly be used to improve the resistance of plants to Fusarium graminearum infections.

According to Zhou, the next steps are to work with industry partners to develop the applications and delivery methods needed to successfully commercialize the technology.

Zhou says the first commercial products could be available in as soon as two or three years, but he notes the timeline will depend on how much investment the companies involved in the commercialization process are prepared to put towards research and development, as well as their capacity for building large-scale enzyme production facilities, and how quickly the final products can be registered.


Related
AAFC researchers discover new bacteria in soil that can detoxify DON
Mycotoxins in corn linked to western bean cutworm
Mining the soil for data: The impact of cropping systems on soil health
Government steps in to help Ontario producers affected by DON