During the spring of 2012, an early appearance of diamondback moth had crop scouts and extensionists providing advice on a seldom-seen event. Normally, diamondback moth is of more concern at the bud to podding stage of canola. This past year, though, diamondback moth was close to or reached spraying thresholds during the early leaf stages in some areas. That left growers asking, “Where did they come from and what should we do?”

“Typically, diamondback moth blows in from the southern United States. This year, there were early wind trajectories from the US, so that is the most likely source,” says Greg Sekulic, an agronomist with the Canola Council of Canada. “There is also some evidence that some may have overwintered.”

Entomologist John Gavloski with Manitoba Agriculture, Food and Rural Initiatives (MAFRI) says anecdotal evidence shows some diamondback moth may have overwintered in Manitoba in 2012. Some of the early diamondback moth found in pheromone-baited traps were in very good shape in comparison to the battered moth that usually arrive on the wind from the south.

“It is hard to know if they overwintered. There is no proof [in 2012], but some were in quite good shape early in the season,” says Gavloski.

Regardless of where or how the diamondback moth infestation developed, it caused real concern for some farmers.

Several fields were sprayed in southwest Manitoba and one field was reseeded due to diamondback moth damage. Across the rest of the Prairies, crop scouts and farmers were on high alert.

While high populations of diamondback moth were a concern early in the spring on canola seedlings, both Gavloski and Sekulic caution growers to keep an eye on their seedling canola by scouting frequently. Damage to canola is caused by larval feeding on seedling leaves, but the greatest damage is usually on buds, flowers and pods. Diamondback moth can have three to four generations in Western Canada, each generation going through four larval stages. The length of time for a diamondback moth to go from egg to adult is about 32 days, although that varies from 21 to 51 days depending on weather and food conditions.

Feeding damage at the seedling stage is evident on the leaves either at the outside margins or in the middle. The first instar larvae will mine inside the leaves, leaving white tunnels. Late instars may also feed underneath the leaf, leaving a waxy, opaque layer similar to a window. The use of economic thresholds to determine if the pest warrants spraying is critical.

“Pay attention to economic thresholds. Spraying will hurt beneficials, so only spray if you absolutely need to,” says Sekulic.

The economic threshold at the seedling stage is a nominal threshold, based on field observations rather than scientific research. This nominal threshold – control is recommended when 25 to 33 percent of the cotyledons or true leaves are defoliated – is the best estimate of when spraying is necessary, but farmers should take other factors into consideration.

Large areas of the field should have reached the nominal threshold, rather than just patches of the field. Diamondback moth does not move across the field when it is in larval stages, so damage does not spread as quickly as with a flea beetle infestation.

Diamondback moth larvae should also still be actively feeding. If the larvae are starting to cocoon (pupate), they have stopped eating and are not a threat at this stage. Also check to see if the newest leaves are being eaten. A rapidly growing canola crop may be able to outgrow feeding damage.

Another consideration is whether flea beetles are also causing damage. If this is the case, use cumulative damage from both insects and apply the same threshold of 25 to 33 percent defoliation. If spraying is necessary to control both insects, only Lambda-cyhalothrin (Matador/Silencer) and Decis are registered for both insects.

Where did they go?

The ability of predators and parasites to control diamondback moth outbreaks highlights the need to crop-scout frequently, and to use the nominal threshold to guide insecticide application decisions. In addition to actual field scouting, growers can use online resources, such as the Canola Council of Canada’s “Canola Watch” or the Western Forum on Pest Management’s “Insect Pests Monitoring Network.” Both provide weekly updates during the growing season, and can be found online.

“My message is pay attention to economic thresholds. We need to give beneficial predators and parasitoids a chance to help out with outbreaks,” says Sekulic. “Remember that the threshold only covers the cost of an insecticide application – it is not a moneymaking point. Sub-threshold spraying is not only a direct loss of money, but does catastrophic harm to beneficial species.” 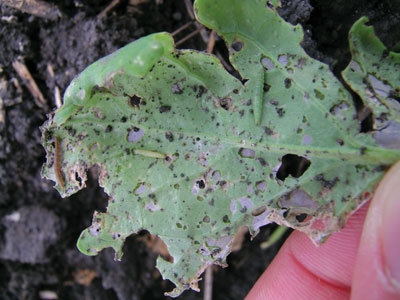