Prairie Tide Chemicals Inc. (PTC) is a small company with a bold vision for flax peptides. The Saskatoon-based company is commercializing its patented process to recover these high-value components from flaxseed. Flax peptides have the potential for use in a wide range of products, from health foods to pharmaceuticals to cosmetics.

“An important goal for us is to find some really big applications for these peptides and eventually produce an awful lot of peptides from the entire flax crop,” says Dr. Martin J.T. Reaney, president and CEO of PTC.

Reaney is also the research chair of Lipid Quality and Utilization at the University of Saskatchewan. He formed PTC a few years ago as a start-up company to commercialize the advances he and his research team are making regarding flax peptides.

Flaxseed flavour-makers
Reaney’s research into flax peptides started when he was working for Agriculture and Agri-Food Canada. A flaxseed oil company asked for his help in removing the bitter flavour that can develop in the oil with time. He determined that the bitterness plus some other flavour changes are due to changes in the flax peptides.

“The flavour chemistry of flax is quite interesting. When flaxseed oil is fresh, people describe its flavour as ‘nutty.’ We believe that nutty flavour is largely due to the peptides,” he explains.

As time goes by, the peptides start to react with oxygen in the oil, the air or other sources. “When the peptides become partly oxidized, the oil has a bitter flavour, but the oil is still in very good shape.”

With further chemical reactions over time, the oil starts to spoil. “There’s development of another set of flavours which people call ‘painty’ or ‘grassy.’ When the painty flavour shows up, the oil is starting to go bad. The grassy flavour is probably another oxidation of peptides, but we’re not certain about that.”

To help the flaxseed oil company, Reaney developed a process to remove peptides from the oil.

He also realized that the peptide-rich waste from this process could be extremely valuable.

Cyclic peptides made in plants are known as orbitides. Reaney notes, “There are about seven families of plants, including flax, that have orbitides. For instance, oranges and other species in the citrus family have orbitides; in the catnip family there’s a lot of known orbitides; and there are some in the family with portulaca.”

Flaxseed turns out to be a great source of orbitides. In fact, it has 30 different orbitides, each with its own particular chemistry. “Imagine an orbitide as being like a Swiss army knife with the little blades and other tools sticking out, which are all the different [amino acids and other components]. What things are sticking out of it will greatly determine what the orbitide can be used for. In flax, we can find a wide range of orbitides that are very useful for different things,” explains Reaney.

Through earlier research, Reaney developed comprehensive information on orbitides in flax cultivars. As part of a major initiative called TUFGEN (Total Utilization Flax Genomics), about 400 flax varieties from the world collection were grown in Saskatoon and Morden. Reaney measured the orbitides in all of those 400 varieties at each location.

He also found that the flax varieties currently grown on the Prairies have about average orbitide levels. Because the variation in orbitide concentrations is heritable, plant breeders could potentially develop varieties with higher concentrations of particular orbitides to meet a market demand.


Harnessing orbitide potential
“We see the orbitides being used in almost anything you can imagine,” says Reaney. “First of all, because they have potential healthy effects, they could be used in skin creams and in nutraceuticals, the foods you eat for health benefits. They could also be used in foods for companion animals and even feed for livestock, again all related to health.”

Other possibilities include uses in pharmaceuticals, industrial chemistry and applications for harsh environments. For example, Reaney’s collaborators are exploring uses of flax orbitides as anti-cancer agents, as drug carriers, in photodynamic therapy, and in photovoltaic technology to harvest solar energy.

As a key step in harnessing the potential of flax orbitides, PTC is currently working on commercializing its orbitide recovery process.

“As a company, we are focusing on being able to supply the orbitides to others. Our technology relates to getting them out of the flaxseed as efficiently as possible, making them as pure as possible, and making them as reproducible as possible, so when someone buys an orbitide from us, it’s always the same thing,” explains Reaney.

PTC’s focus is unique. “We’re the first in the world to be mass-producing orbitides,” says Reaney. “Others are synthesizing peptides but that is generally a very expensive process. They get two amino acids and do a chemical reaction to link them. Then they do another chemical reaction to link a third amino acid, and so on. Every time you do a chemical reaction, it is expensive. To link together eight or nine amino acids to make an orbitide-like molecule, you would need 10 or 11 reactions, which would be extremely expensive. It’s much less expensive to grow some flax and extract the orbitides than it is to synthesize them.”

According to Reaney, some other types of cyclic molecules are worth over $10,000 per kilogram, so flax orbitides could be very valuable. PTC’s process has the capacity to recover up to about two kilograms of orbitides from one tonne of flaxseed oil.

Although there’s still a long way to go before PTC’s flax orbitide production would have much effect on the western Canadian flax industry, the long-term potential is intriguing.

“We’re working on applications at all scales, but we’re hoping that eventually the value of the orbitides might actually exceed the value of the flax crop as it stands. If we find certain opportunities, which I believe are there, then the orbitides would sell for a pretty high value, but we would be selling 600 or 700 tonnes of orbitides, which would come from the entire flax crop.” 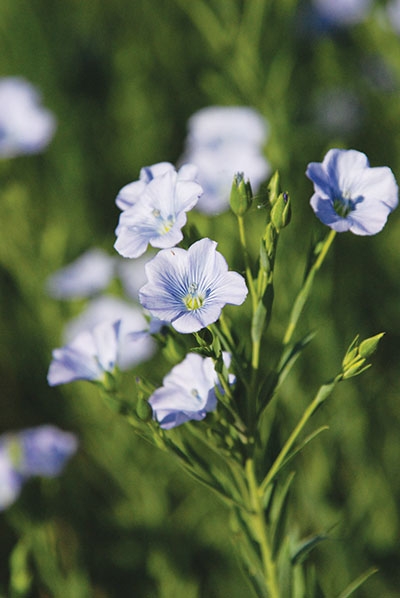 A Prairie company is extracting high-value components from flax. Prairie Tide Chemicals Inc. (PTC) is a small company with a bold vision for flax peptides.