Corn rootworm is a serious pest in corn-on-corn fields. 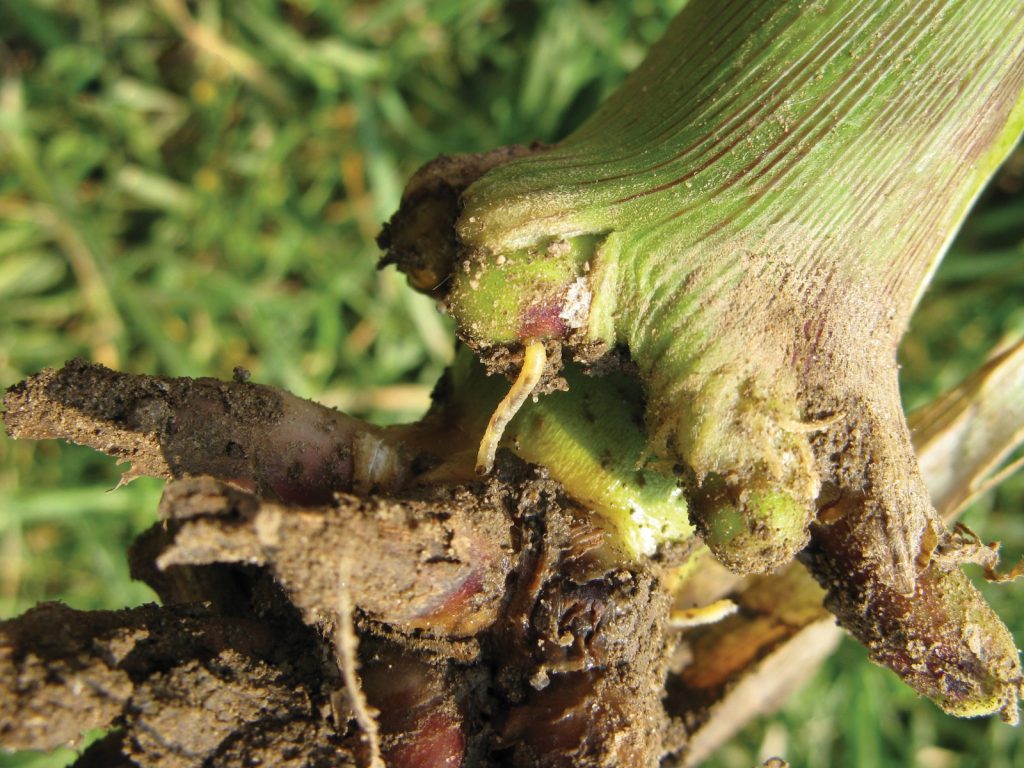 At present, corn hybrids with Bt corn rootworm traits offer effective control in Ontario conditions. But this insect is notorious for its ability to develop resistance to control measures. So seed corn companies, researchers, extension agents and grower associations are working to maintain the effectiveness of these Bt traits for as long as possible.

The latest advance in these efforts is Syngenta’s new Agrisure Duracade trait, which will be available for the 2014 growing season.

Corn rootworms impact corn yields in both their larval and adult stages. Starting in about mid-June, the larvae feed on corn roots for several weeks. This root damage stunts plant growth, reduces water and nutrient uptake, and causes lodging and goose-necking (bent stalks). The larvae transform into adult beetles towards the end of July. The adults feed on corn leaves and on the silks and pollen, reducing pollination. They lay their eggs in cornfields. The eggs overwinter and begin hatching in about early June.

On the lookout for resistance
So far, there haven’t been any confirmed cases of Bt-resistant corn rootworms in Ontario, but the risk is real. “In the U.S. since 2009, there have been increasing numbers of field cases where Bt rootworm traits are not performing as they should be and the beetle populations are overwhelming the technology,” explains Jocelyn Smith, program lead for insect resistance management at the University of Guelph’s Ridgetown Campus.

She says the rootworm populations in Ontario are genetically the same as those in the U.S. so the genes for resistance to Bt traits are already present in our populations.

“You can speculate that our risk of developing resistance may be somewhat lower in Ontario and other areas away from the central Corn Belt in the U.S., where corn production is more intensive, with larger fields, large corn rootworm populations and more corn-on-corn [which are all factors that increase selection pressure for Bt resistance]. Outside of the Corn Belt, we may have less selection pressure in that we typically have more crop rotation, smaller fields and typically not as heavy corn rootworm populations,” says Smith.

“We hope those practices will help prevent resistance from taking hold here. But the risk definitely still exists because it comes down to genetics and selection pressure.”

As part of the strategy to preserve the effectiveness of Bt corn rootworm traits in Canada, researchers at the University of Guelph, Ridgetown Campus, including Smith, Dr. Art Schaafsma and graduate student Andrea Hitchon, along with Tracey Baute from the Ontario Ministry of Agriculture and Food, work collaboratively with seed corn industry partners to monitor for resistance as a mandate of the Canadian Corn Pest Coalition.

Input from Ontario corn growers is crucial for early discovery of Bt resistance. So Smith, Hitchon and Baute are asking growers to contact them about situations where Bt rootworm products don’t seem to be performing as well as expected. The team will follow up on any reports and determine if resistance exists. If they find any patches of resistance, they will work with growers to eliminate those patches before the problem expands.

Smith notes, “So far in 2013, we have responded to a few field instances with unexpected rootworm injury, but none have raised concerns about resistance development.”

To look for signs of resistance, Smith encourages growers to start scouting in July by digging up corn roots and rating them for injury. Through the rest of the growing season, growers can watch for goose-necking, lodging and high numbers of adult beetles. Scouting in July is important because, if lodging isn’t noticed until harvest, it can be difficult at that stage to figure out if corn rootworm was the culprit.

Of course, growers also need to take steps to prevent Bt resistance when controlling corn rootworm. “The number 1 strategy is crop rotation because if you don’t plant corn after corn then the rootworm larvae will have nothing to feed on and will die. Rotation is still the best way to control rootworm even in areas with resistance,” says Smith. “The number 2 strategy would be to use a Bt trait to control corn rootworms in second-year corn.”

If using a Bt hybrid, growers must comply with the mandatory Bt refuge requirements regulated by the Canadian Food Inspection Agency. A refuge is a portion of a Bt field that is planted to a similar hybrid without the Bt trait. Refuges slow the evolution of Bt resistance because some of the target insect’s population is not exposed to the Bt toxin.

“A recently published study from Iowa State University has shown that there are no yield benefits to adding soil insecticides to Bt corn. It could also mask a developing resistance problem,” she says.

“Canadian corn producers can be really proud of the fact that they recognize the value of crop rotation in sustainable and competitive corn production. But they really need to remain diligent to such practices as crop and trait rotation and planting the proper refuge,” notes Jennifer Hubert, one of Syngenta’s regulatory affairs team members.

“There is a misconception that all Cry proteins on the market are the same – that if you get resistance to one, you’ll get resistance to the others,” says Hope Hart, technical leader, product safety, who works for Syngenta in North Carolina.

“So I like to explain that, although they are similar in the way they work, there is a very specific and unique difference that gives them different modes of action.”

She outlines how Cry proteins work: “An insect takes a bite of the plant and ingests the Cry protein. That protein gets clipped by an enzyme and activated in the insect gut. Once it is activated, it binds a protein receptor on the insect’s gut membrane. Once it is on that membrane, it then pokes holes in the gut. That is similar for all Cry proteins. But what gives each of these proteins a unique mode of action is that they each bind different protein receptors on the insect’s gut membrane.”

“However this hybrid protein that I had developed was still controlling rootworm. And, in rootworm research, the first rule is to never discount anything with rootworm activity because it is not easy to get. So we started looking into other uses for the protein. And when we started looking into the modes of action, we found that the Duracade protein binds a different receptor than mCry3A does.”

So Syngenta went to work to develop corn hybrids pyramided with both the Duracade and RW proteins. “Duracade is not going to be a product by itself. It will only be sold with our Agrisure RW because that will give you the two modes of action against rootworm,” Hart says.

Although Smith hasn’t seen the new Duracade products yet, she notes, “Pyramided Bt events are a better option than just a single trait because the chance of resistance developing against two different traits at the same time is much less than it would be to develop against a single trait. It’s good that we’re getting another option in the marketplace to use against corn rootworm.”

Duracade advances
“For the 2014 growing season, we’re going to have five different corn hybrids available with Agrisure Duracade through our NK Brand. Those products will range in maturity from 2,650 to 3,250 heat units. So we’ve got a range of maturities that growers are looking for within Ontario and Quebec,” says Shawn Brenneman, agronomic sales manager with Syngenta in Ontario. “We expect Duracade to be even more a part of our portfolio as we go forward.”

Not only are all five hybrids pyramided with both the Duracade and the RW traits, but also all five will be available in E-Z Refuge, with five per cent refuge blended in the bag, so it’s easy to comply with refuge requirements.

That high level of control was found in a study led by Dr. Bruce Hibbard of the United States Department of Agriculture. The researchers evaluated various Cry proteins for rootworm control at five Missouri sites in 2007, 2008 and 2009. Based on the number of larvae that survived to become adult beetles, corn hybrids pyramided with both the Duracade and RW traits caused 99.91 per cent mortality in western corn rootworm larvae.

In comparison, if a moderate-dose Bt toxin kills 97 per cent of the corn rootworm beetle population in a field, the remaining three per cent can actually be quite a large number of beetles and some of those beetles could be carrying genes for resistance.

Smith says higher-dose Bt rootworm events would be an important advance in the battle against resistance. “From the beginning we knew that the risk of developing resistance was greater with the [first-generation] Bt events because none of them behave as a high-dose trait against corn rootworm. So they allow more than enough survival for rootworm populations to possibly become resistant.”

Brenneman says Duracade will be a good option for corn-on-corn fields with corn rootworm problems. “I see Agrisure Duracade being a great tool for a lot of the livestock growers – typically a majority of corn-on-corn acres are dairy, hog and beef farmers.”

He adds, “In the last couple of years, where we really see the issues with corn rootworm beetle are high-pressure corn-on-corn situations and then you add a stress such as drought stress . . . Agrisure Duracade will help maximize yields by mitigating the effects these additional stresses have in those areas where corn rootworm beetle has been an economic concern.”

Brenneman notes that corn rootworm control offers added benefits. “The first generation of Bt rootworm traits have the additional benefit of keeping the roots healthy and intact. Duracade will bring similar added benefits – keeping the roots actively growing and healthy so the plant is able to move the water and nutrients it needs to have the best yield and the best quality.”

Overall, it looks like Agrisure Duracade will be a further step forward in preserving the effectiveness of Bt rootworm traits. It will offer another option for Bt trait rotations, it will be pyramided with another Bt rootworm trait, it will be packaged in a refuge-in-a-bag format, and research data indicate that it will provide a higher-dose Bt event.

The University of Guelph’s Ridgetown Campus has a corn rootworm resistance monitoring program through which the researchers collect beetle populations every year and test them using a bioassay technique for Bt resistance. So if Ontario corn growers report any instances of possible resistance in their fields, Smith and Hitchon can follow up by collecting beetles from those fields and testing them.

However, it’s not as easy as you might think to determine if a corn rootworm is actually resistant to a Bt trait. First of all, corn rootworms don’t thrive under lab conditions. In addition, because the Bt traits work on the larvae, the researchers have to go through the time-consuming process of hatching larvae for testing. Smith explains, “You’re not able to collect beetles until late summer. Then we bring them into the lab where we collect their eggs. The eggs then require a five-month diapause period under cold temperatures [before hatching into larvae], so we have to put the eggs in the refrigerator until about February. Only then can we hatch them out and start to do testing. So it takes about a year to get any data.”

As well, Smith says the jury is still out on the best way to test for Bt resistance in corn rootworms.