Not only are purple foods eye-catching, but the colour can indicate the presence of health-promoting dietary compounds called anthocyanins. AnthoGrain, a Canadian-bred purple wheat, has much higher levels of anthocyanins than regular wheat, plus it has the many other healthy compounds found in regular wheat. Now, a project involving two clinical studies is looking at just how beneficial AnthoGrain is for human health. 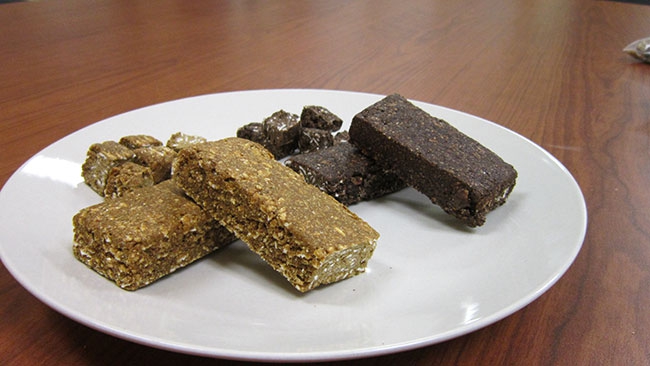 The principal investigator on this project is Elsayed Abdelaal with Agriculture and Agri-Food Canada’s (AAFC) Guelph Research and Development Centre. The project also involves Mark Pickard, the president of InfraReady Products, and Amanda Wright, an associate professor and director of the human nutraceutical research unit at the University of Guelph.

InfraReady, which produces AnthoGrain, is a Saskatoon-based food ingredient supplier specializing in cereal, oilseed, pulse and ancient grain products. Pickard says AnthoGrain is used in products like breads, crackers and breakfast cereals, and in noodles produced in southeast Asia. As well, the company has been exploring the possibility of using AnthoGrain in an alcoholic beverage.

According to Pickard, InfraReady first became interested in purple wheat as a food ingredient in the late ‘90s. “Initially it was the attractive colour; the diversity has marketing appeal. But by about 2000, it was the composition of the pigmentation that caught our interest. The colour is due to anthocyanins and anthocyanins are antioxidants.”

Variety development
InfraReady obtained its first purple wheat variety from the Saskatchewan Wheat Pool (SWP) after the pool discontinued its wheat breeding efforts in the mid-1990s. Pickard says, “The variety was a numbered line, so we trademarked the name AnthoGrain to recognize it as a distinct grain.”

Rob Graf, now a winter wheat breeder with AAFC in Lethbridge, Alta., was involved in developing that purple wheat
variety. He says, “I was working with SWP at the time as a spring wheat breeder, but I wasn’t alone in those efforts. Derek Potts, who was the CPS [Canada Prairie Spring] and durum breeder with SWP at the time (prior to his work on Brassica juncea canola), was the main person working on this. Derek and I obtained the purple wheat germplasm that was used in the breeding efforts from Pierre Hucl, who had brought some purple feed wheat lines back from New Zealand in the early 1990s.”

Hucl is a professor at the University of Saskatchewan’s Crop Development Centre (CDC) and works on improving spring wheat, specialty wheat and canaryseed varieties. He says, “In the late 1980s and early 1990s, I was looking for a seed type that we could use in developing wheat varieties for either feed purposes or ethanol production that would distinguish them from other classes of wheat in Western Canada. In those days, and up until [August 2008], wheats had kernel visual distinguishability (KVD) requirements. Most other combinations of colour and shape were already taken, so purple or blue was an alternative.”

Purple and blue wheats get their colour from the anthocyanins in different parts of the bran; the purple colour is found in the pericarp and the blue colour is in the aleurone. These wheats caught the attention of Abdelaal, who for many years has been a leader in anthocyanin research, although he recently moved to a management position with AAFC. Since the 1990s, Abdelaal and Hucl have collaborated on many studies related to purple and blue wheats and the anthocyanin composition of these wheats. They have found these wheats have relatively high levels of anthocyanins and contain many different anthocyanin compounds.

So, starting in the mid-1990s, with funding from the Saskatchewan Agriculture Development Fund, Hucl shifted the emphasis of his purple wheat variety development to focus on the anthocyanin aspect. He notes, “My initial work was mainly to see if it was possible to increase the anthocyanin levels in the bran to a point where it might be of interest to extract the pigments.” Once he got a good handle on that aspect, he started to work on improving other traits in his breeding lines.

Hucl adds, “I’ve been working with some pretty exotic material in terms of adaptation – lines that are later maturing, prone to disease and so on. The challenge has been trying to identify lines that are not only higher in anthocyanin than what is currently available but also have all the other traits [desired by growers and processors].”

His first registered purple wheat variety is CDC Primepurple, which was registered in 2013. It has much higher levels of anthocyanins than his earlier experimental lines. CDC Primepurple is now the wheat used for AnthoGrain. InfraReady partners with a certified seed business that contracts farmers to grow the grain.

In recent years, a major objective in Hucl’s purple wheat breeding program has been to improve disease resistance. He says, “I have a line that will be in the final year of testing in 2017, so it could be up for support of registration in 2018. This new line is an improvement in disease reaction compared to anything else in a purple wheat background.”

Next, Hucl hopes to enhance the quality of purple wheat for different end-uses. “Are you going to use it for noodles or a topping on multigrain bread? Or are you going to extract anthocyanins from the bran or make a powder out of the bran, and if you do that, what are you going to do with the rest of the grain? So I’m looking at the baking quality and milling quality of some of these lines to see what we need to do to improve the marketability of the overall product, not just the pigment.”

Clinical studies
The clinical studies project was sparked by Abdelaal and Pickard’s interest in assessing the actual health effects of purple wheat. Pickard notes, “Knowledge is powerful. The presence of anthocyanins alone doesn’t really speak to their bioavailability or their recognizable health benefits. This work that we are doing could be the first step toward a qualified health claim for the product. So understanding the bioavailability and how purple wheat can affect human health is pretty important.”

“Mark and Elsayed came to us because we have a research unit in our department of human health and nutritional studies that is dedicated to human studies of functional foods and natural products. AnthoGrain, because it has some health-promoting properties, can be considered a functional food ingredient,” Wright says.

“Anthocyanins are phytochemicals [plant compounds] that in fruits and vegetables often confer the red/purple/blue hue; for example, fruits like blackberries, cherries or cranberries are rich in anthocyanins. There has been a lot of evidence in pre-clinical work and in ‘in vitro’ [laboratory] studies, that anthocyanins have benefits that might have relevance for human health,” she explains. “We think anthocyanins are among the diverse phytochemicals that have the ability to modulate human health and diseases. In particular, because of their anti-inflammatory and antioxidative behaviours, we think anthocyanins might play a role in mitigating some of the factors that contribute to the high incidence of chronic disease in the North American population.” Anthocyanins might help in fighting such health problems as cancer, diabetes or heart disease.

Wright adds, “To our knowledge this is the first human study looking at the bioavailability and the health impacts of grain-based anthocyanin enriched products.” The project is funded through the Canadian Food Innovators program under Growing Forward 2.

As a first step, InfraReady developed a number of different prototype food products using AnthoGrain. Then AAFC analyzed the nutrient and anthocyanin content of those products. Based on the results of that analysis, a granola bar and a cracker each containing AnthoGrain were selected for use in the clinical studies. InfraReady is making all the AnthoGrain and control wheat products used in the clinical studies.

Wright is working on the two clinical studies with a team composed of Tamer Gamel, a PhD candidate, and several other graduate and undergraduate students and staff at the University of Guelph.

The first study is assessing the bioavailability of the anthocyanins from the purple wheat granola bar and crackers. The aim is to see whether people who consume purple wheat-based products have changes in their anthocyanin levels, in the many metabolites that are breakdown products of anthocyanins, or in different measures of inflammation or oxidative stress. The research team has finished the work with the trial participants and has almost completed the complicated lab analyses of the blood and urine samples. The team is now embarking on the data analysis.

The second study involves participants who are overweight or obese and who have some level of chronic inflammation. For eight weeks, these participants consume four daily servings of either the control granola bar or the purple wheat granola bar. Wright explains, “We are measuring their blood to look at changes in oxidative state and levels of oxidation and inflammation, and also things like blood lipids and glucose. Hopefully we will be able to see whether people who incorporate purple wheat products into their diet on a regular basis have beneficial impacts on these chronic disease markers.”

For this intervention study, the team started recruiting participants in the summer of 2016. So far, they have worked with 17 participants and aim to recruit 40 in total. Wright expects to have the study’s results by the fall.

It is challenging to find people who meet the study’s health criteria and can also commit to the eight-week trial period. However, Wright notes, “We do have a lot of people who are keen to try the purple wheat products and curious about purple wheat. When I was a kid, people seemed to prefer white bread, but now there is such diversity in terms of the products that are available. People want to be in our study and they want to be in the purple wheat treatment group.”

Potential benefits
The project offers an exciting opportunity for Wright and her research team to answer an important health question. “From the investment that InfraReady and the government are making in this project, we are able to advance the science further in terms of whether anthocyanins can modulate inflammation and oxidative stress, which are risk factors of chronic disease.” As well, the students involved in the project are learning about purple wheat, anthocyanins, and how to collect high-quality evidence that could help support commercial product development.

If purple wheat is proven to provide health benefits, then the project could help generate more interest in it and perhaps increase opportunities for purple wheat growers and processors.  Hucl says, “I see purple wheat as a marketing opportunity for a small number of producers and companies. My philosophy is that not everything has to be big. If you have many small things and you add them up, then you have something big.”

“I think niche wheat opportunities are fairly rare,” Pickard notes. “Purple wheat can offer higher returns per acre for the farmer. And the value-added primary and secondary processing activities contribute to economic development. So there are lots of potential positives from purple wheat for growers and others in the value chain for sure.”