News
Winter canola not likely for the Prairies

The promise of winter canola remains just that: a promise. Despite some limited yet successful trials on winter Brassica rapa (Polish-type) canola in southern Alberta, the winter hardiness just isn’t there to make a case for canola breeders to start working on canola-quality winter hybrids. 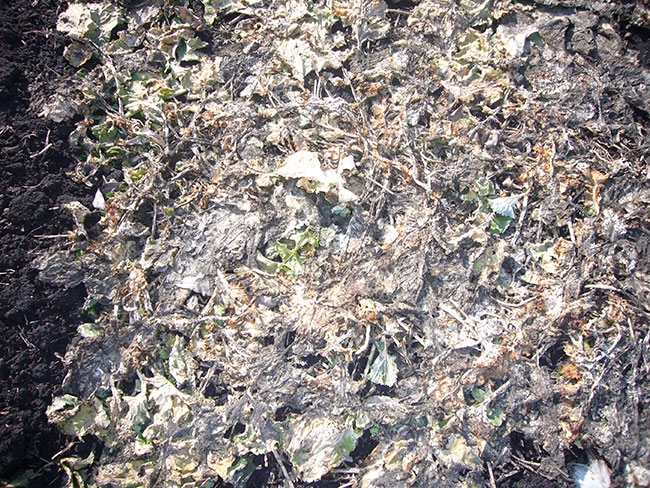 Winter B. rapa killed by winter in Edmonton. (Photo taken on March 25 The promise of winter canola remains just that: a promise.

“We found that winter B. rapa overwinters often in the southern part of Alberta,” says Habibur Rahman, a plant breeder at the University of Alberta. “However winter survival was not successful in other areas of the province.”

Rahman collected B. rapa lines from Europe (nine lines) and China (10 lines) and evaluated them in Alberta in collaboration with Murray Hartman and Ross McKenzie (retired) with Alberta Agriculture, and Kevin Falk with Agriculture and Agri-Food Canada (AAFC) Saskatoon. These winter types of canola were first evaluated in 2007/08 and 2008/09 in field trials in Beaverlodge, Edmonton, Lacombe and Lethbridge, Alta., and then evaluated for another two years in 2009/10 and 2010/11 at Lethbridge only. Rahman also created F1 hybrids to evaluate by crossing European and Chinese types.

The trials were seeded in August of each year, and winter survival was evaluated the following spring. Spring-type B. rapa and B. napus varieties were also included in the trials. Only the Lethbridge site showed promise with winter B. rapa surviving three out of the four years tested. The mild winter there makes successful overwintering more likely, and in the 2008/09 trials, even a few spring-type B. napus plants survived the winter. After two years of complete winterkill at Beaverlodge, Edmonton and Lacombe, trials were discontinued at those locations.

In the 2010/11 trials at Lethbridge, Rahman says winter survival was significantly higher under stubble condition compared to tilled land, and the European winter type showed better survival than the Chinese type, especially under tillage. Under stubble condition, the European winter B. rapa showed about 99 per cent survival and the F1 hybrids achieved almost 100 per cent survival.

Another experiment was also conducted at Edmonton by growing the winter B. rapa plants in pots, and placing the plants outdoors. For this, the European and Chinese winter B. rapa and their F1 hybrids were used, and seeding was done in August. All plants were winterkilled by January when air temperature fell to -15 C or below.

While the results at Lethbridge are promising, Rahman says the University of Alberta is not carrying on with further research. “In the next phase of research, we would need to focus on the improvement of winter hardiness of B. rapa for the southern part of Alberta. This would require conducting field trials and breeding in southern Alberta, and we don’t have a canola breeder in southern Alberta to do this job.”

Rahman adds not much genetic variability is present in the tested winter B. rapa populations for winter hardiness, and selection for this trait would not be very effective for the harsh winter in central and northern Alberta.

Winter B. rapa killed by winter in Edmonton. (Photo taken on March 25

“People talk about winter canola in Europe and the high yields they can achieve, but their winters are a lot milder than ours. They don’t get the cold we do. A few regions in the southern U.S. are starting to grow winter canola, but that’s a long way from our winter weather,” says Blaine Woycheshin, crop manager for canola with Bayer in Calgary. “Our spring napus breeding platform is very strong in Canada and we have focused there to meet grower needs versus developing a winter B. rapa hybrid.”

DuPont, BrettYoung, Dow and Proven Seeds also indicated they are not working on winter canola because of the winter hardiness issue. Proven Seeds uses winter canola germplasm to introduce desirable traits into spring type canola, but not in a breeding program for winter canola production.

While Rahman’s research shows the potential for winter B. rapa canola, the effort to improve agronomic traits and winter hardiness, and the small potential acreage in southern Alberta means there won’t be any winter canola planted in Western Canada any time soon.