As the acreage of soybeans continues to expand in Manitoba, increasing to 2.2 million acres in 2017, developing beneficial management practices for soybean cropping systems is a priority. One of the questions surrounds nutrient management strategies for soybean, and in particular, yield responses to phosphorus (P) fertilizer.

"We recently completed a research project to address this question and found that soybeans don't respond very much to fertilizer phosphate," explains Don Flaten, a professor in the department of soil science at the University of Manitoba. "Soybeans have an extraordinary capacity to feed on soil reserves, better than any other crop I've ever worked with, with little response to fertilizer P. These results highlight the importance for growers to develop a long-term rotational fertilization strategy for P in soybean cropping systems and not just focus on the soybean crop year."

This three-year project was initiated in 2013 and conducted at 10 locations across southern Manitoba to assess soybean yield response to P fertilizer and the risk of reduced plant stand and seed yield due to seed-placed fertilizer. Flaten and his masters student, Gustavo Bardella, led the overall project, but most of the sites were managed by federal, provincial and regional collaborators. The treatments included different P fertilizer rates (20, 40 and 80 pounds of phosphorus pentoxide per acre, or lb P2O5/ac) applied in side-band, seed-placed or broadcast, plus a control that did not receive P fertilizer. Also, half of the sites had soil P test in the very low to low range of sufficiency (between zero and 10 parts per million, or ppm, Olsen P), in which many crops would have a high probability of response to P fertilizer.

"The key finding from the project is that soybeans show very little response to P fertilizer at any of the rates or treatment methods," Flaten says. "Phosphorus fertilization regardless of soil P level, P rate and P placement increased seed yield at only one of 28 site-years. Even in control plots with very low soil P levels (three ppm Olsen P), soybeans were usually able take up enough soil P to produce high yields similar to P fertilized plots, without responding to any P fertilizer rate and placement."

However, in some trials seed placement of P fertilizer resulted in seed row toxicity. Although the risk of seed row toxicity wasn't as severe as expected based on information from elsewhere, there were still several trials where high rates of phosphate fertilizer in the seedrow caused stand reductions and in a few cases yield reductions as well. Flaten adds that although seedling toxicity was relatively rare, if there is a low probability of a response to P in soybeans, why risk seedling toxicity if there is no benefit.

Develop a long-term rotational fertilizer strategy for P in cropping systems
"Since there was only one positive response to P fertilizer in this study in the soybean crop year, the remaining question is how to develop a strategy to maintain P fertility in the soil for other crops in rotation that are more sensitive to P fertility, such as cereal crops," Flaten says. "Soybean and other crops, like canola, both create rotational challenges with P as both crops have a very high removal rate. For example, soybeans remove 0.84 pounds of P per bushel (lbs P/bu), which means a 40 bushel per acre (bu/ac) soybean crop removes 34 pounds of P per acre (lbs P/ac), and canola often removes more P than can be applied as fertilizer. Therefore, growers will need to develop a long-term rotational fertilizer strategy to ensure they maintain a balance of P in the soil that meets removal rates through the entire crop rotation."

Growers are advised to apply large amounts of P fertilizer outside of the soybean phase of the rotation. A good strategy for direct seeding systems is to side-band higher rates of P to reduce the risk of seedrow toxicity. "We are also advocating periodic applications of manure to help build P levels in the soil," Flaten says. "Growers may also want to pre-plant band extra P fertilizer for cereals and some other crops. High rates of P can be placed in the seed row of a cereal crop with minimal risk, with up to 50 lbs P2O5/ac (100 lbs of 11-52-10 per acre) to help offset the depletion of P in a soybean year. Another option is to consider fall banding phosphate fertilizer and ammonium sulphate prior to a canola crop as a strategy for increasing the amount of P and S fertilizer without risking seed row toxicity."

Flaten cautions growers to use best practices when applying P and avoid practices such as broadcasting P, which can result in nutrient losses and potential run-off into waterways, particularly in the fall. In the Prairies, 80 per cent of runoff in the spring is from snowmelt, making fall broadcast P applications a high risk for losses. Banding the P under the soil surface is the best placement for maximizing crop uptake and reducing the risk of runoff losses.

"We strongly recommend growers use the P balance worksheet posted on the Manitoba Pulse and Soybean Growers website in order to check the P balance in your specific crop rotation and determine if there is a surplus or a deficit of P," adds Flaten. The worksheet and a more detailed factsheet on P fertilization strategies for Manitoba cropping systems can be found here. 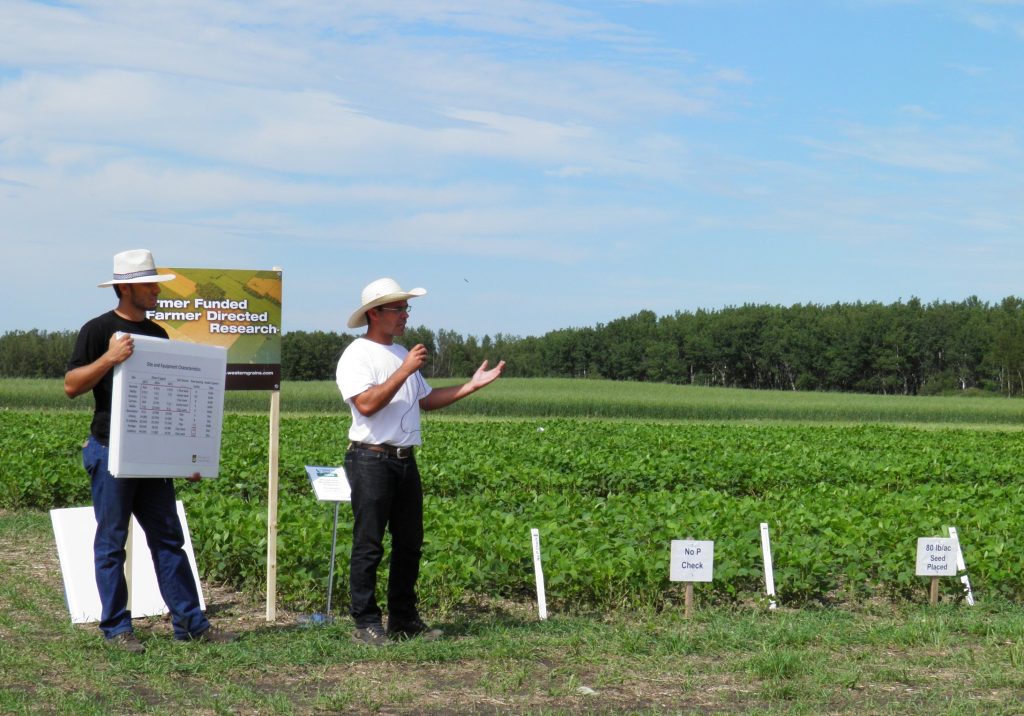