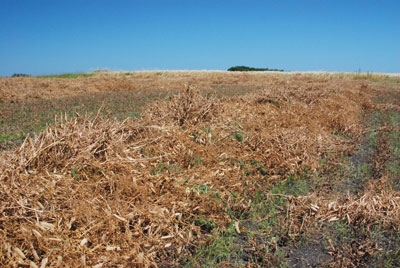 A nitrogen credit of 1 lb of N per acre for every bushel per acre of pea yield may used by some soil test labs to predict N mineralization Nitrogen (N) mineralization is the wildcard in the game of crop production. It is unpredictable

Nitrogen (N) mineralization is the wildcard in the game of crop production. It is unpredictable, varies year to year, and is highly dependent on environmental conditions, yet contributes significantly to crop yield. Knowing how much N becomes available to a crop from mineralization during the growing season would be much easier to predict if it were possible to predict the weather. “There are two contributors of nitrogen to crop growth. The first is the residual inorganic forms of mineral nitrogen, ammonium and nitrate, and they are fairly easy to measure. The other important contribution that is not so easy to measure and predict is N mineralization,” says University of Saskatchewan soil scientist Dr. Jeff Schoenau.

Plant roots can only absorb inorganic forms of N, such as ammonium and nitrate, which are either available from applied N fertilizer or produced through mineralization of organic N.  Nitrogen mineralization is the conversion of organically bound nitrogen in soil organic matter, crop residues, manure and other organic amendments into inorganic forms of ammonium and nitrate. Soil microbes do the conversion, which makes the process highly dependent on growing season weather.

Estimates of a typical growing season contribution of N mineralization in the zero to six inches of topsoil range from 15 to 50 kg per hectare (13.5 to 44.5 lbs per acre), says Schoenau. For Black soils with high organic matter under no-till with legumes in the rotation, that contribution could be considerably higher than 50 kg.

Schoenau explains that N mineralization is influenced by all the factors in the environment that influence biological activity.

“Years when we have a warm, moist May and June, that tends to increase N mineralization and producers are often very pleasantly surprised by the fact that they maybe didn’t add as much N fertilizer as predicted to be normally needed but still got a very good yield and protein content. Alternatively, cold and dry conditions can reduce mineralization such that you may end up with a lower N availability than you anticipated and consequently lower yield and lower protein.”

Factors affecting N mineralization
Whereas environmental conditions have a major impact on N mineralization and are difficult to predict in advance, other factors provide indications of potential N mineralization. Sources of mineralizable organic N include native soil organic matter (OM), crop residues, and organic amendments like manure and compost. The amount of N in these sources can be measured, and the carbon-to-nitrogen (C:N) ratio of those different organic materials can be a very useful tool in predicting whether they will provide an immediate net increase in available N or perhaps a temporary decrease in available N when that material undergoes decomposition.

For example, when the C:N ratio is less than 20:1, as is common in native soil organic matter, a net increase in available N can be expected when the micro-organisms decompose that material.

Alternatively, when the C:N ratio is greater than 30:1, an initial temporary decrease in available N upon decomposition is likely. This is termed immobilization, and occurs because the microbes need additional N to utilize all the carbon in the organic matter. Schoenau explains immobilization can occur when wheat straw or chaff is incorporated into the soil. After a few weeks, though, the immobilized N in microbial bodies can be mineralized back into the inorganic form and become available again for plant uptake.

Crop residues have variable C:N ratios. Some young legume crop residues are quite N-rich, with a narrow C:N ratio around 15:1. These legumes make good candidates for green manure crops, because there is an almost immediate mineralization of organic N when they undergo decomposition.

Other crop residues like cereal straw or oilseed residues can have C:N ratios of 100:1 or greater, which means an initial immobilization of available N when they undergo decomposition.

Organic amendments can be all over the map. For example, if cattle manure has a lot of straw, its C:N ratio will likely be greater than 15:1 or 20:1, and not much mineralized N will be released from that manure or compost in the year of application. If there is enough straw mixed with the manure and the C:N ratio is wide enough, that manure might actually cause an initial, temporary decrease in available N in the year of application, and Schoenau has observed this in some of his research.

For other manures that are more consistent in the composition with a lower C:N ratio, like liquid swine manure, N mineralization is more likely to provide a benefit of between 20 and 30 percent of the manure organic N content that will be mineralized during the season.

Can N mineralization be predicted?
Predicting mineralization would mean N fertilizer recommendations could be more closely tailored to crop needs. At best, though, predictions will be dependent on weather conditions throughout the growing season.

“Because mineralization is a biological process, what we ultimately end up with depends a great deal on environmental conditions. Predicting that is a challenge,” says Schoenau.

Direct prediction models have been developed based on soil organic matter. For example, a zero- to six-inch sample of soil with five percent OM would contain 0.25 percent total N by weight. Assume one percent is mineralized during the growing season, and that works out to 50 kg of available N per hectare (44.5 lbs per acre).

Mineralization indices have been developed to help predict N mineralization. Some measure the active fraction of organic N, which is the portion susceptible to decomposition to inorganic forms during the course of a season. Examples of this are hot KCl extraction and the Mulvaney, or Illinois, soil test.

Another approach is to measure the short-term release of ammonium and nitrate using Plant Root Simulator (PRS) probes during a period of 24 hours. This provides the first part of the mineralization curve, which is then used to model mineralization beyond that time period.

Schoenau explains that all of these have provided a fairly strong correlation between test predictions and actual plant uptake. “But for any of these indices to work to their full potential, they either have to be calibrated or somehow built into some type of model. There are still gains to be made in the approaches to forecasting and accounting for N mineralization. The predictions, though, really need to be adjusted on a local basis because a lot of influences that affect this contribution vary at the farm level.”

Crop rotations also influence recommendations. For example, an N credit of 1 lb of N per acre for every bushel per acre of pea yield may be used by some soil test labs.

Schoenau also conducted work at Indian Head, Saskatchewan, on Black soils, comparing five-year, no-till to 25-year, no-till land. He saw higher supply rates of inorganic nitrate over a two-week period on the long-term, no-till land. “As a consequence of the adoption of the no-till system over the long term with the building up organic matter and organic N, we saw an increase in the supply power of that soil through mineralization. There was also a higher supply of mineralized nitrogen on pea stubble than wheat stubble,” he explains.

Schoenau says that while mineralizable N predictions are still highly dependent on environmental conditions, understanding the factors behind mineralization can help farmers fine-tune their N fertilizer applications. After that, it is up to the weather.