Several types of plant compounds, such as flavonoids and isoflavonoids, are known to discourage insects from feeding on plants. What are the types and amounts of these compounds in Ontario soybean cultivars? 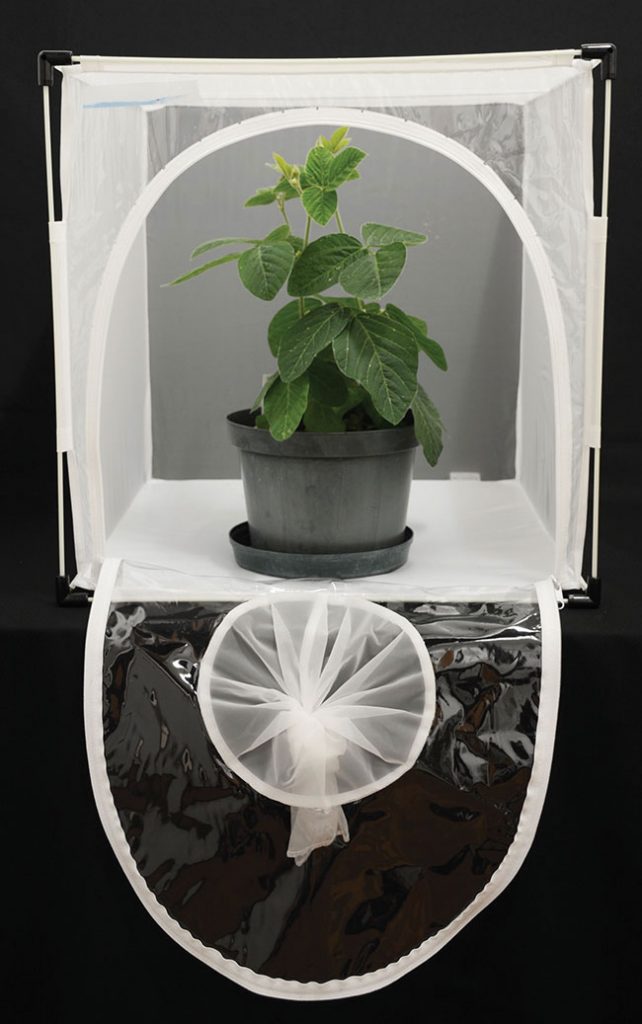 The project team grew 12 Ontario soybean cultivars in the greenhouse and exposed them to spider mites (shown here) and soybean aphids.

How effective are they in deterring two key soybean pests? A project is underway to answer such questions. Along with identifying some existing cultivars with good resistance to these pests, the project’s findings will also help soybean breeders in developing new cultivars with improved resistance.

“For soybeans grown in Ontario, we want to know whether or not these compounds are present in high enough amounts that they would affect the soybean aphid and the two-spotted spider mite. So, we want to see if there is a strong correlation between the content of these compounds in these different cultivars and any anti-insect or anti-mite activity,” explains Ian Scott, who is co-leading this project with Sangeeta Dhaubhadel. They are both research scientists with Agriculture and Agri-Food Canada (AAFC) in London, Ont.

Soybean aphids and two-spotted spider mites are pest priorities for Grain Farmers of Ontario (GFO), which is funding the project. “The soybean aphid is a perennial problem for Ontario soybean growers. The spider mite is an emerging pest; it is not a problem every year, but it is definitely a concern to the growers,” Scott says.

Both pests can significantly reduce soybean yields. Insecticides can be used to control them but will also kill beneficial insects, such as ladybird beetles, lacewings and parasitic wasps, that prey on or parasitize these pests. So, cultivars with improved resistance would be a great tool to add to the toolbox for managing soybean aphids and spider mites.

She notes, “A range of flavonoids and isoflavonoids that influence host-selection behaviour by insects have been reported. But we don’t know how these compounds modulate pest feeding behaviour, so we don’t really know how they help soybeans to fight off insects.”

Dhaubhadel’s expertise is in molecular mechanisms in soybean related to the production of isoflavonoids and other similar compounds. She explains that the types and amounts of isoflavonoids and flavonoids in soybean leaves vary depending on genetic and environmental factors. For example, cultivars with greater resistance to pests will have higher basal levels of such compounds. Both pest-resistant and pest-susceptible cultivars will produce more of these compounds in response to stresses like attacks by insects or pathogens. As well, abiotic environmental conditions such soil type, precipitation and temperature will influence the production of these compounds. 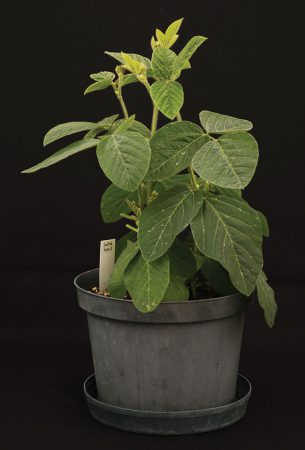 Until the AAFC project got underway, no research had been done with Ontario soybean cultivars on soybean aphids and isoflavonoids or other similar anti-insect compounds.

Dhaubhadel and Scott’s research hypothesis was that isoflavonoids would be key in deterring the two pests in Ontario soybean cultivars because isoflavonoids are known to be one of the main types of anti-insect compounds in soybeans.

“The effects of isoflavonoids on insects that feed on soybeans have been observed with several different types of insects including stink bugs, some aphids, and caterpillars such as armyworms and leafworms. The compounds usually are not acutely toxic, but they do have anti-feeding effects or inhibit the growth of those insects,” explains Scott, an expert in insect toxicology.

Spider mite/soybean interactions have been even less studied. Scott says, “Very little work has been done so far on the interaction between isoflavonoids and mites, or soybeans and mites. A lot of research has been done with spider mites on host plant resistance in other horticulture crops and field crops, but not much with soybeans.”

In developing the project, Scott and Dhaubhadel consulted with soybean researchers and breeders about which cultivars are typically grown in Ontario and what was known about the cultivars’ resistance to soybean aphids and spider mites. They selected 12 cultivars, encompassing various soybean maturity groups and a range of estimated resistance levels to the two pests.

The project team sampled the soybean leaves before and after the cultivars were exposed to the aphids or mites. The leaf samples were analyzed for six types of isoflavonoids.

“We are over a year into the project. We have a lot of chemical and bioassay results. And we have gathered quite a bit of new information on soybean and herbivore interactions that we believe was not previously known,” Scott notes.

The results so far indicate a strong potential for improving resistance through soybean breeding, especially resistance to soybean aphids. “We have found that the most resistant cultivar in terms of aphid resistance is as much as almost 40 times more resistant than the most susceptible. So, there is quite a range just within the 12 soybean cultivars that we selected. We don’t see quite as large a range in terms of the level of spider mite resistance,” he says.

“Also, we are finding that some of the cultivars that show resistance to the aphids are not necessarily the same ones that are resistant to the spider mites. So, the two herbivores are responding differently to the defences in those plants.”

He adds, “The one cultivar that had relatively high resistance to both the aphid and the spider mite is OAC Avatar, which was developed by the University of Guelph. OT06-23 and OAC Strive had higher aphid resistance but only moderate mite resistance.”

Perhaps the most significant finding so far is that there isn’t a strong correlation between the cultivars’ resistance levels and the isoflavonoid concentrations in their leaves. So, the chemists on the project team are now conducting a much more thorough analysis of the same leaf samples, broadening the scope of their tests to measure many other compounds that, like isoflavonoids, are produced by metabolic processes within the plant.

This expanded work is already providing additional insights. “We’re finding that the cultivar resistance level seems to have a much stronger correlation with other classes of leaf compounds, such as compounds in the flavonoid class,” Scott notes.

So, the project is now a lot more complex, but it will provide much more information on these compounds in Ontario soybean cultivars and their role in pest/soybean interactions. Dhaubhadel says, “The results from this research will help recommend cultivars for planting in Ontario based on resistance to these two pests, and will also provide direction for breeding new resistant genotypes.”