Scouting is the key to developing a herbicide plan. 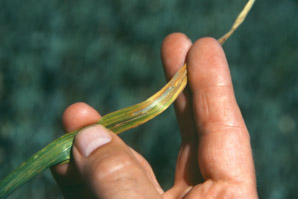 Tank-mixing is popular; it can save time and money as long as weed staging
and spectrum are analyzed first. To make a good tank-mix decision, identify
the full weed spectrum (broadleaf and grassy) in each field. It will often vary,
even between two fields in adjacent quarters. Then identify weed density and
staging or size of each weed species at the same time.

"These items form your baseline," Dave Kelner, ACE Specialist for
Agricore United in Winnipeg, Manitoba, says. "They will help you determine
which tank-mix products should be considered."

Field scouting is the key to developing a herbicide plan. Will it be a one-pass
herbicide, tank-mix or split application? And avoid the temptation to use the
same tank-mix on all the wheat fields just to facilitate ease-of-application.

"Some tank-mix choices don't fit the field situation. I encourage growers
whenever possible to tailor their product selection for individual fields,"
says Kelner. "It's rare to find a perfect mix for every situation. If you
pick one tank-mix to cover several fields, it's important to understand there's
going to be a sacrifice."

Since wild oats remains the number one weed concern for many, Kelner says that
growers should focus on it as their worst weed. "Avoid the temptation under
pressure to choose a broadleaf herbicide and then throw in your favorite grassy
weed herbicide. This can be a costly mistake," he says.

Of course, grassy weed herbicides are not all the same. Be sure to read the
list of weeds on the label and make a good decision based on your weed spectrum.
Growers in southern Manitoba, for example, who battle millet along with wild
oats, must choose a grassy herbicide that not only offers excellent wild oat
control, but also tackles millet. By focussing on the worst grassy weeds, the
choices in broadleaf tank-mix partners can be more easily considered. From there,
how and when the tank-mix is applied will also contribute to value and effectiveness.

It is also important to consider whether grassy and broadleaf weeds can be
treated in one application. "If the timing is right, you can get them all
at once," Kelner says. "In some situations, you'll get an early flush
of one type of weed, but the others won't be ready. If this is the case, go
with a split application, not a tank-mix."

Weed resistance and herbicide rotations of both grassy and broadleaf weeds
also must be considered. "In southern Manitoba, Group 2 resistant kochia
is rampant," Kelner says. "Where Group 2 herbicides were once a viable
option for kochia control, they are no longer effective in many cases."

Residuals
Herbicide residue should also be considered. "You may want to take advantage
of the residual feature or you may want to avoid it like a plague because it
will restrict your cropping options," says Kelner.

Once a grower has made this decision, he can choose the herbicide that best
fits the grassy and broadleaf weed spectrum, taking into account weed pressure,
staging, rotation and budget. "There are situations where one grassy weed
product has a better fit than another, depending on the staging and density
of weeds you're dealing with," he says.

The choice, then, becomes a matter of how well the product controls the target
weed, along with the cost and flexibility of tank-mix partners.

Record keeping support
"The days of a grower saying, 'I've got all the data stored up here in
my head' are gone," Kelner says. "Nobody can track all the herbicide
combinations even in one year across their whole land base. An overwhelming
amount of data needs to be recorded over multiple years. Good record keeping
is critical for managing this information."

The record system must be able to track information on an individual field
basis by product name and herbicide group. "Field history kept on good
software has prevented many growers from working themselves into a corner between
herbicide and crop rotation choices," Kelner notes.

Good records can also help a grower avoid the temptation to pick one tank-mix
to cover all the weeds by crop type. "As soon as you adopt that kind of
strategy, you compromise control," he says. "You're going to have
to give up something on each field. Take the time to pick the best combinations
on an individual field basis, and switch products as opposed to applying one
blanket mix. Also take into account that the performance of many herbicides
is best when the product is applied alone."

Approved tank-mix combinations and detailed information about pre-packed mixes
can be found in the provincial 'guides to crop protection'. Focus on the effectiveness
of the individual products, and compare that to a tank-mix or the pre-packaged
tank-mix herbicides that come in one package. These pre-packed products usually
are available at a reduced price, compared to buying the individual products
and tank-mixing them.

A final tip is to take advantage of a dealer's knowledge and experience. They
have tens of thousands of acres of experience in herbicide application and can
guide growers on what herbicides perform best in certain situations. -30-