Features Agronomy Fertility and Nutrients
Copper fertilization on your farm

Could your fields potentially benefit from application of this micronutrient? 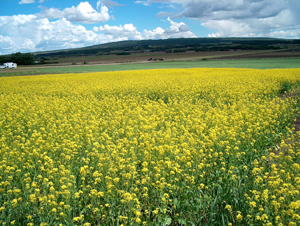 There has been a growing interest in the potential benefits of using micronutrients
on the part of prairie farmers. This has especially been true in the case of
copper, a micronutrient that has had a dramatic impact on the yield and quality
of wheat and barley on some specific soil types.

Crop variability
One of the key characteristics of a copper deficient cereal crop is a pronounced
variability in the appearance of the crop. However, relying solely on this crop
attribute to diagnose the need for copper fertilization would result in millions
of acres being needlessly treated with copper in some years. This is because
there are many other soil and climatic factors that can lead to variable crop
growth.

Soil characteristics
There are several rather unique aspects of soils that are most prone to copper
deficiencies. In fact, the soils that are most likely to exhibit a deficiency
of copper tend to be quite deep, lighter textured (i.e. relatively high in sand
content), usually stone free and generally, but not exclusively, with a higher
organic matter content of the surface layer. Organic or peaty soils are also
quite prone to being deficient in copper.

Soil test levels
A deficiency and a recommendation to apply copper should never be diagnosed
based on using only a surface or zero to six inch sampling depth. Unfortunately,
far too often this shallow sampling depth forms the exclusive basis for copper
recommendations. Samples collected from the zero to six inch, six to 12 inch
and 12 to 24 inch depths are extremely useful for predicting whether or not
a cereal crop is likely to respond to an application of copper. If the surface
layer is low or marginal in plant available copper and the level of copper decreases
with depth, there is a very strong likelihood that the wheat or barley will
respond. However, if the levels of available copper increase with deeper sampling
depths, it is very unlikely that an economic response will be obtained from
an application of copper fertilizer.

Stony soils seldom respond
If the soils have formed on glacial tills, the levels of available copper tend
to increase with depth. There has never been a documented case of a cereal crop
responding to an application of copper on these glacial till soils. A soil formed
on a glacial till will have the typical knob and kettle topography (i.e. eroded
knolls and potholes). An exception would be a stony, sandy soil that was formed
on glacial tills resorted by glacial melt waters that can often be quite sandy,
at least in portions of a field.

Switching to no-till production
Observations revealed several cases of soils with marginal levels of copper
that showed no evidence of copper deficiencies while managed under a conventional
tillage system. However, after switching to no-till production, evidence of
copper deficiency symptoms became quite obvious. What is the reason for this
difference? Copper is bound in organic plant material. Under a conventional
tillage system, this organic plant material is quite quickly decomposed and
the copper is thus remobilized and made available for the following crops. However,
within a no-till system, a lot of crop residues accumulate on the soil surface
and the copper contained in these residues is remobilized more slowly. If copper
levels are low or marginal, the additional amount bound up in the surface litter
can trigger a serious deficiency in some fields that are converted to a no-till
crop production system.

Aggressive fertilizer management
There are situations in which some growers have been applying relatively high
rates of fertilizers and producing above average yields for a significant number
of years. It is obvious that such an aggressive crop production program can
stress the ability of a soil to supply an adequate amount of copper required
to sustain the higher yield goals, especially if the levels of copper were initially
marginal. For that reason, growers who have consistently been pushing to achieve
higher yields should be conducting soil tests for copper and if necessary consider
establishing a test strip in the suspect fields.

Copper deficiency symptoms
The symptoms of a severe copper deficiency in wheat or barley is characterized
by the formation of withered tips on the leaves. At times these have been confused
with frost damage. This symptom is commonly referred to as pig tailing or whip
tailing and is caused by the fact that the leaf tip dies. These tips usually
take on a rolled appearance and turn white. These tips are quite fragile and
can easily break away from the healthy tissue. For that reason, they can easily
disappear in windy conditions.

Other symptoms
Other diagnostic symptoms include the production of shrivelled kernels, aborted
heads, the appearance of dark brownish patches in the crop at the milky dough
stage of growth, head and stem breakage, the presence of ergot and so on. This
information and other important facts related to copper deficiencies will be
further elaborated upon in a future column.

John Harapiak has approximately 40 years of western Canadian based
fertilizer related experience. He will continue to contribute stories to
Top Crop Manager. He can be contacted by e-mail at: jharapiak@shaw.ca.