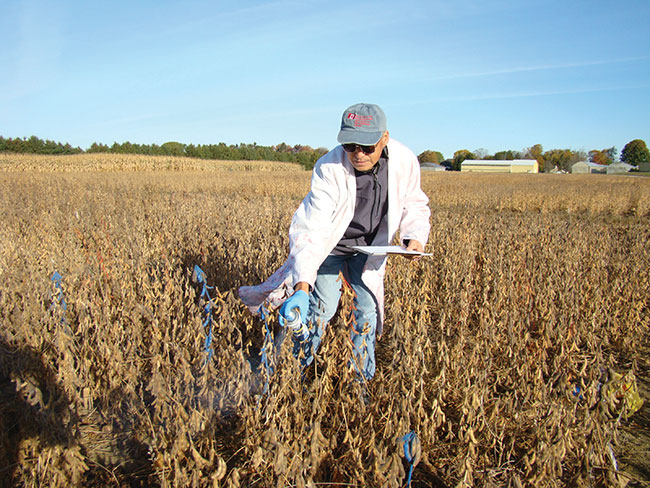 Tofu, soymilk, miso, edamame – those are just some of the food uses for soybeans. For each type of product, processors look for particular quality characteristics in the soybeans they buy. Soybean breeder Kangfu Yu is developing diverse varieties to meet those special quality requirements while ensuring the varieties also have the traits that Ontario growers need.

“Canada has established a global reputation for the production of high-quality, non-GMO, food-grade soybeans. Today, food-grade soybeans represent approximately 25 per cent of the crop produced in Canada, with a value of more than $0.5 billion. Food-grade soybeans are exported to Japan, Southeast Asia, Europe and China, and most of this trade is through identity preserved (IP) contract production of specific varieties,” explains Yu, who leads the food-grade soybean breeding program at the Harrow Research and Development Centre (RDC) of Agriculture and Agri-Food Canada (AAFC).

“The Harrow-RDC soybean breeding program has made significant contributions to the Canadian food-grade soybean industry through the development of high-yielding, excellent processing quality soybean varieties with resistance to pests such as soybean cyst nematode and soybean sudden death syndrome.

“We have developed those varieties for Canadian soybean industries and Ontario soybean growers. More than 20 food-grade soybean varieties have been registered and released to the industry by the program since 1989. These varieties have improved the profit margin of Canadian soybean growers and increased the competitiveness of Canadian non-GMO IP soybeans in world soy food markets, which is especially significant for the Asian-Pacific Rim countries.”

The program’s main food quality focus is high protein content (greater than 41 per cent) and high free sugar concentration. These are important properties for such foods as tofu, soymilk and miso.

Yu and his research group also target various other traits valued by processors. For instance, they want yellow or clear colours for the hilum (the “eye,” where the seed was attached to the pod) so the colour of the soy food will not be affected. They also aim for soybeans with higher water uptake, at least 2.2 times the bean’s original weight, because processors have to soak the beans to make food products.

For protein quality, they want the ratio of 11S (glycinin) proteins to 7S (β-conglycinin) proteins – the two main types of soy proteins – to be between 1.1 and 1.7. Other traits of interest include large, round seeds for better visual appeal, and resistance to soybean mosaic virus to prevent seed-staining.

Traits for growers
The breeding program mainly develops long-season soybean varieties suited to the more southerly parts of southwestern Ontario, with maturity group (MG) ratings between 2.0 and 2.5. “But recently, I have been trying to develop lines with earlier maturities than MG 2.0 so we can provide food-grade varieties suited to a larger area in Ontario,” Yu notes.

The program’s top disease resistance priorities are soybean cyst nematode (SCN) and soybean sudden death syndrome (SDS). “Resistance to SCN and SDS is particularly important for soybean varieties adapted to the longer season areas of Chatham-Kent, Essex, and Lambton counties. In these areas, we estimate that SCN and SDS are two of the three most limiting diseases for soybean production,” says Owen Wally, a crop pathologist at the Harrow-RDC.

SCN and SDS are both soil-borne pathogens that can cause severe yield impacts. Wally’s studies show that, year-by-year, both diseases are becoming more severe in Ontario’s southwest, where they first arrived in Canada, and their ranges are gradually expanding to the north and east through the province’s soybean-growing areas.

For SDS, they do two types of indoor screening. Wally says, “We inoculate the seedlings with the fungus that causes SDS, Fusarium virguliforme, and observe the plant’s response.

“As well, we extract the toxin produced by this fungus, and we apply that toxin directly to the plants to see if it causes the symptoms.”

They do these different tests to see which modes of action a plant has for fighting the pathogen. He explains, “We think there are multiple mechanisms for how plants can tolerate this pathogen.

“One mechanism is for the plant to resist the fungus from colonizing the root, which prevents the disease. If the pathogen is able to colonize the root and release its toxin, then the plant may resist the toxin, which makes the symptoms less severe.”

For the outdoor SDS screening, Wally’s group uses some naturally infested sites and an SDS disease nursery they have recently set up at the Harrow-RDC.

“For the Harrow SDS nursery, we inoculate the soil with Fusarium virguliforme. Every season when we plant the breeding program’s test material, we give the nursery an extra inoculation of the pathogen. We also irrigate the nursery so the moisture levels are sufficient to cause ample disease.”

For the indoor SCN screening, they use cones filled with sand that they inoculate with the nematode. They place the inoculated cones in a water bath and then monitor the plants growing in the sand for cysts on their roots.

Their SCN field screening takes place at two sites: one at Harrow-RDC and the other in Chatham-Kent. These sites aren’t inoculated; they are naturally infested with high populations of the nematode.

Yu is currently using two sources of SCN resistance in his breeding program. SCN resistance genes are identified by the soybean line that was the original source of the resistance; for instance, the most commonly used source is called plant introduction (PI) 88788.

“When Vaino Poysa was the breeder for this program, he started using PI 88788 as the major resistance source for soybean cyst nematode. Since I took over the program in 2012, I have also added PI 437654, another major source of resistance,” Yu notes.

For many years, PI 88788 has been used as the single SCN resistance source in North American soybean varieties. Recent studies show that some populations of the nematode have now overcome this resistance. 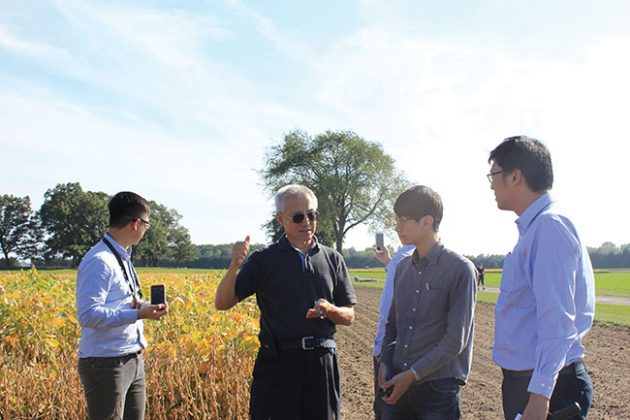 Latest varieties and speciality lines
Yu’s breeding program is quite prolific, with new varieties continually coming along. For example, in 2019, the program registered two new varieties with the Canadian Seed Growers Association (CSGA).

“One is AAC Big Ben, licensed by Southwest Seeds Inc. This variety has SCN resistance and yields that are about 10 per cent higher than the control based on 12 site-year location tests over two years,” he says.

“The other variety is AAC Wigle, licensed by SeCan. AAC Wigle has a protein concentration of about 46 to 47 per cent; that was significantly higher than the control at 12 site-year locations over two years. This variety also has SCN resistance and higher yields.”

Currently, the program has three varieties in line to be registered soon. “We are registering OX-181; we suggested the name AAC McRae. It is licensed by SeCan and is being registered with the CSGA now. This variety not only has higher yields, but also excellent resistance/tolerance to SCN and SDS. Since one of the parents has PI 437456 and the other has PI 88788, this variety should provide durable resistance to SCN.”

The second upcoming variety is OX-191. “We are calling it AAC Hallam. It is licensed by SeCan and has high yields and SCN resistance.”

The third one is OX-202, with the suggested name AAC Richard. It is licensed by SeCan, and offers high yields and resistance/tolerance to both SCN and SDS.

“In addition to the release of finished varieties, the program has also developed and released specialty food-grade soybean germplasm to Plant Gene Resources of Canada,” Yu explains.

“These germplasm releases provide valuable genetic material for use by other public and private soybean germplasm programs and further support growth in the Canadian soybean industry.”

“Usually soybeans have three lipoxygenase enzymes, which are major contributors to undesirable grassy and beany flavours in soymilk. But in HS-151, HS-201 and HS-203, we got rid of all three of these enzymes,” he says.

“Another germplasm line we developed is HS-171, a large-seeded soybean that is suitable for edamame. Also known as vegetable soybeans, edamame soybeans are harvested at the green stage and served as a vegetable dish – for example, in Japanese cuisine. We also developed a black soybean line, HS-172, which can be used to make fermented foods such as douchi.”

In addition, the program has released six protein variant soybean lines and has more of these lines in development. Yu explains, “In each of the 11S and 7S protein categories, there are a number of subunits. In 7S, there are three subunits: α, α’ and β. And in 11S, there are five major soy proteins: A1, A2, A3, A4, A5.” Yu and his group have found that these different subunits can have some influence on processing qualities.

“These protein variant lines derive from non-adapted and wild-type materials introduced into the program from Japan approximately 20 years ago.

“The protein variants have unique characteristics that may have applications in traditional soy food manufacture, protein concentrates, protein isolates and other uses.”

“In collaboration with scientists from the U.S. and AAFC’s London-RDC, we have developed KASP-SNP markers. We have used them in our breeding program to assist/speed up the process of selection for disease resistance and food quality traits.”

COVID-19 impacts
The Harrow-RDC, like other AAFC research centres across the country, was closed in March due to the pandemic and has only partially reopened as of early August.

“Although I think we do need to contribute to the control of this pandemic by reducing our fieldwork and lab work, COVID-19 is having a significant impact on our breeding program,” Yu says. “It has delayed our progress by at least a year.”

Despite the difficulties, Yu and his research group are doing their best to continue their work of developing improved varieties that help Ontario growers to produce top quality food-grade soybeans that are competitive in world markets.

This breeding program is currently funded by AAFC and the Canadian Field Crop Research Alliance under the Canadian Agricultural Partnership.