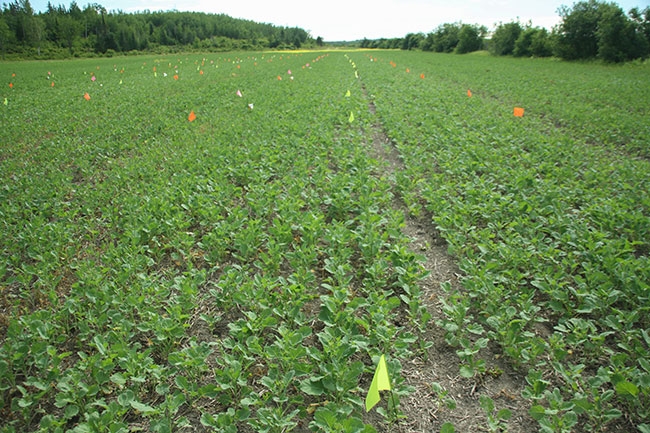 Swede midge (Contarinia nasturtii) attacks plants in the Brassicaceae family including field crops such as canola and mustard, cruciferous vegetables like broccoli and cabbage, and weeds like shepherd’s purse and wild mustard. This insect has multiple generations in a year, depending on the weather. The adults are tiny flies that emerge from the soil. The females lay their eggs in areas of active new growth on host plants. After the larvae hatch from the eggs, they feed on the growing plant tissues. Then they fall to the soil to pupate, and in a few weeks, the next generation of adults emerges from the soil.

In canola, the larvae cause various types of damage depending on the pest’s population levels and the plant’s growth stage when the pest attacks. Examples of damage include crinkled leaves, malformed buds that don’t open, flowers with fused petals, pods that fail to develop, and stunted or dead plants. Yield loss can be severe if high numbers of larvae attack when the crop is most vulnerable, which is during the rosette stage and bud formation. Once the flowers are blooming, the pest’s attacks don’t result in significant yield impacts.

Swede midge is native to Europe and Asia. In North America, it was first confirmed in Ontario in 2000 in cruciferous vegetables. Since then the pest has spread to Quebec, Nova Scotia, Prince Edward Island, Manitoba, Saskatchewan, Alberta, and some U.S. states. In Quebec, it was initially found in 2001 in vegetables and in 2006 in canola.

“The swede midge population in Quebec is increasing. We began to monitor in 2013. We observed the first economic damage that year in Abitibi-Témiscamingue, which is on the border with Ontario. Swede midge had already become established as a significant canola pest in Ontario’s Temiskaming region two years before that,” says Labrie, who is with the Centre de recherche sur les grains Inc. (CÉROM).

“In the Saguenay-Lac-Saint-Jean region, we observed the first economic damage in 2015. In 2017, we are seeing an increase in the pest’s population in all the province’s canola production areas, although only a few areas have a lot of damage.”

She notes, “Quebec has seen a reduction in canola production in the past year, but that was because producers are switching to soybeans….However, some canola producers are becoming very concerned about swede midge, and some of them are talking about not growing canola at all on their farm.”

Currently, the main practices to try to manage swede midge in canola include applying insecticides, using early seeding, rotating out of cruciferous crops for at least three or four years, planting canola in fields that are at least two kilometres from the current year’s and the previous year’s cruciferous fields, and controlling cruciferous weeds.

Labrie’s project involves field and laboratory experiments relating to various control options. The project started in 2016 and is funded by Quebec’s Ministry of Agriculture and Coop fédérée, a private funding partner. Julie-Éléonore Maisonhaute joined the project in November 2016. She is a post-doctoral researcher at the Université du Québec à Montréal (UQAM), under the supervision of Labrie and Éric Lucas, a professor in the department of biological sciences at the university.

“Only two insecticides are registered for swede midge control in canola, and a lot of producers are not using them because they say that the products are not very effective,” Labrie notes. The two products are Matador (active ingredient lambda-cyhalothrin) and Coragen (chlorantraniliprole). In June 2017, Health Canada’s Pest Management Regulatory Agency proposed a complete phase out of Matador, so swede midge insecticide options might be even more limited in the future.

Maisonhaute says, “For the pheromone trapping, we followed the methodology developed by Rebecca Hallett from the University of Guelph. We have four pheromone traps per field. The first insecticide application is made after 20 midges have accumulated across all four traps [with counts beginning at the cotyledon stage]. For subsequent applications, the threshold is five midges per trap per day.” She notes that Hallett is continuing to work on refining these thresholds, but for these experiments Labrie’s group used the methodology recommended in 2016.

The researchers are collecting data on swede midge damage levels and canola yields. This fall, they will be analyzing the collected data and determining the costs of the different treatments.

The effects of Lumiderm
Although the final results are still to come, the researchers have made an interesting observation regarding the effects of Lumiderm (cyantraniliprole), an insecticidal seed treatment. “In 2016, we were not aware that one of the producers tried canola seed treated with Lumiderm. Lumiderm is in the same family of insecticides as Coragen [Group 28]. We observed that the swede midge damage was much lower in the Lumiderm field than in the other field, where the cultivar had a neonicotinoid seed treatment,” Labrie says.

So in 2017 they added a second field at each of the two locations – one field for the neonicotinoid canola and the other for the Lumiderm canola – and carried out the seven treatments on all four fields.

“At the one of the two locations, we observed much less crop damage with Lumiderm,” Labrie says. Unfortunately, the other location was seeded about a month later than the first location due to very poor spring weather. At this late-seeded location, there wasn’t much difference in damage between the Lumiderm canola and neonicotinoid canola, likely because the swede midge population was very high by that time.

Although the Lumiderm seed treatment looks promising, Maisonhaute emphasizes that they need to complete the data analysis to see if other factors could also be influencing the results. Labrie reminds growers that if you use a Lumiderm seed treatment, you cannot apply Coragen within 60 days of planting because of the risk of swede midge developing resistance to this insecticide group.

Cultivar, crop stage and weed studies
Another component is comparing two cultivars to see if they differ in their susceptibility to swede midge. Labrie says, “It is a preliminary analysis because it is very time consuming, costly work. If something comes up with this study, then we will apply for further funding for a larger study.”

Maisonhaute is currently conducting these lab experiments. “I am looking at canola’s susceptibility at different growth stages to see if there are more eggs or larvae when I introduce the swede midge at different stages and with the different varieties of canola,” she explains. Neither variety has an insecticidal seed treatment.

This work will also help determine more precisely which stages of canola are sensitive to swede midge damage. Labrie notes, “We were not observing damage in the field at the first two or three leaves of canola, and we wondered if maybe the female was not able to lay her eggs on these small plants or if the larvae could not survive on them.”

The researchers have also carried out some initial work on swede midge in cruciferous weeds in field margins. “We know swede midge overwinters in the soil, but we wondered where it is early in the season when it is not in canola. We thought it might be in Brassicaceae weeds in the field margins,” Maisonhaute says.

They sampled these weeds all season long, starting early in the growing season. She says, “We found some swede midges but not a lot. We had expected that they would be present at a higher density. But the low numbers might have been because swede midge’s emergence was delayed by this year’s very cold spring.”

Parasitoid potential
The project is also exploring the possibility of natural control of the pest by parasitic insect species and whether parasitoid activity is compatible with insecticide control of swede midge.

In 2016, Labrie’s group did some limited sampling and found a swede midge parasitoid in the field plots. So in 2017, they did weekly sampling in both the treated and untreated plots in the insecticide experiment.

The parasitoid has been identified as Synopeas myles, a tiny parasitic wasp that is a native of Europe. Maisonhaute says, “This small wasp lays its eggs into the larvae of swede midge. The parasitoid’s larvae develop and kill the swede midge larvae.” In 2015, Hallett found this same parasitoid species in Ontario.

“In Quebec in 2007 and 2008, Guy Boivin, an entomologist with Agriculture and Agri-Food Canada, tried to find parasitoids and didn’t find anything on swede midge at that time. However, the wasp might have been present before but the swede midge population was not high enough that we could observe some parasitism,” Labrie says.

With the weekly sampling in 2017, Labrie’s group found quite a few parasitoids suggesting that the parasitism rate in swede midge in Quebec has increased over the past decade.

“With exotic insects often there is no natural enemy in the environment so their populations increase a lot,” Labrie notes. “It is very interesting that we have a natural enemy of swede midge in our canola fields because it could reduce the pest’s population and might reduce the need for insecticide applications in some years.”

Unfortunately, the parasitoid didn’t start parasitizing swede midge until canola’s flowering period. Labrie says, “It seems that this parasitoid is not able to parasitize earlier in the season when swede midge is a threat to canola. However, it could be important for cruciferous vegetables like broccoli.”

The results from Labrie’s project will provide important information to help improve swede midge management in canola. Maisonhaute says, “We don’t know exactly all the aspects of swede midge yet, but I think we are [learning], especially with [other] swede midge research. We can combine our findings, understand more about the population dynamics of swede midge, and find integrated pest management solutions with less impact on the environment and better control of the pest.”

Labrie is hoping to extend her swede midge work further to help both canola growers and cruciferous vegetable growers. “In Quebec, producers of canola, producers of broccoli and cabbage, and people from many other groups met in March to work together in addressing the swede midge problem. Cohabitation of canola and cruciferous vegetables is not easy in some areas because the canola crop could be a refuge for swede midge, which then goes to broccoli after that. Five years from now, there probably will be no broccoli at all produced in Quebec because [of the increasingly high costs of controlling this pest],” she says. “So we are applying for funding for a large collaborative project in many areas of Quebec, to put together all the data and knowledge we have on swede midge and try to develop more integrated pest management for both groups of crops.”


Related
Stamping out swede midge?
What we know (so far) about the new midge on the Prairies
Assessing the swede midge threat
Alberta swede midge survey results