Swede midge first appeared in canola in Ontario in 2003, and recent extreme populations in northeastern Ontario resulted in the Ontario Canola Growers’ Association (OCGA) strongly recommending in 2015 that producers avoid growing canola for three years across the New Liskeard area in an attempt to suppress swede midge populations. 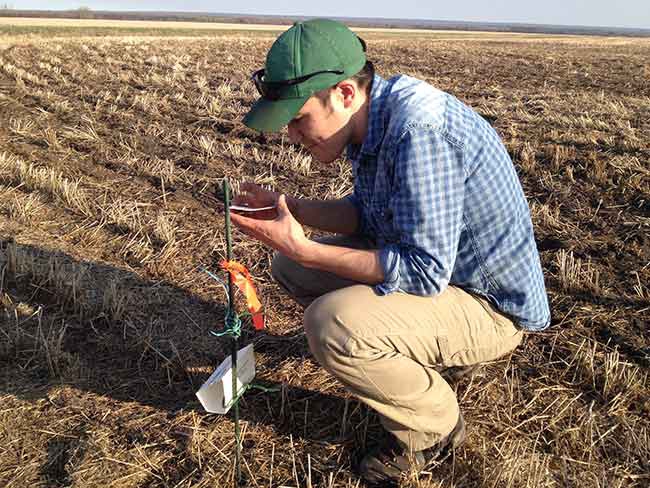 “In 2016, swede midge populations in some areas in Ontario seemed to be less of a problem, likely due to a slow spring and very dry conditions,” explains Rebecca Hallett, a professor at the University of Guelph. “Earlier in the season populations appeared to be lower, however rainfall in late July saw numbers of swede midge increasing in some areas. In the New Liskeard and Temiskaming district, swede midge continues to cause significant concern for canola growers, although canola acreage is down as growers extend rotations with new crop options such as fababeans, peas and flax in an effort to reduce swede midge populations.”

Researchers have confirmed four generations of swede midge in Ontario, but with climate change and weather conditions, five generations are possible. Hallett is continuing to lead research on pheromone action threshold development to try to develop economic recommendations for growers. The yield impact on canola depends on midge population levels, timing of infestation relative to plant stage and timing of insecticide application.

“Because of the variation at different sites across Ontario, it has been difficult to pinpoint the appropriate threshold and number of insecticide applications for swede midge control,” Hallett says. “With the repeated presence and successive generations of swede midge, it is difficult to determine the impact on yield. Currently, we are tentatively recommending that growers spray for swede midge when they are capturing five or more midge per pheromone trap per day. Populations tend to be field specific, so localized trap information is key. There should be multiple traps per field that are checked two or three times per week and the average number of midges captured per trap per day calculated. A spray application is only recommended at the most susceptible stages, particularly at the late vegetative and early bud stages to protect the primary inflorescence. We hope to refine the timing and number of applications that are economic and needed to protect yield over the next couple of years.”

“This work will help us understand the relationship between larval numbers in plants in the field and pheromone trap captures,” Hallett says. “For example, as the number of males in the traps goes up, we can assume there will be a peak of adult emergence, females will be laying eggs and larvae will begin developing within a week or so. If we see 10 males per trap per day, for example, what does that mean in terms of damage down the road and when is it going to be critical to spray? Bringing all of these aspects together will ultimately strengthen the action threshold we recommend.”

Determining when to spray and at what threshold has economic implications. Hallett explains a missed spray can have losses associated with it if there are yield losses. However, an unnecessary spray also has an associated cost. Depending on the year and the cost of production, an estimated six to nine per cent yield loss is required to justify an insecticide application. However, an unnecessary application, depending on the rate of return, could end up cutting profits by 30 to 40 per cent. So fine-tuning the economic threshold and timing of application recommendations is very important.

Currently, the recommended canola rotation for managing swede midge (and other pests and diseases) is one in four years or longer. Seeding early is also recommended, although in areas where cabbage seedpod weevil can also be a problem, earlier seeding may not be feasible. Growers need to determine which pest is more of a problem for their situation. In areas where swede midge is a problem, avoid growing other crucifers either as cover or field crops in rotation or in nearby fields. Use of pheromone traps and regular monitoring is important for determining the timing and necessity of a spray application. As economic threshold recommendations are refined, this decision will become more straightforward. Swede midge can persist even in areas with low canola acreage, so good management is key to keeping canola profitable in Ontario and other regions.

In Saskatchewan, swede midge was first observed in 2007 in small, scattered populations. Although monitoring efforts have confirmed swede midge across Western Canada, the populations are still very low and not yet causing economic impacts. “Swede midge populations in 2016 in emergence trap monitoring were higher than in previous years, particularly in northeastern areas of Saskatchewan near Carrot River and Nipawin,” says Boyd Mori, an entomology biologist with Agriculture and Agri-Food Canada (AAFC) in Saskatoon. “In a driving survey across Saskatchewan, we found swede midge everywhere we looked, but in very low density. There were very minor symptoms on canola crops, and not nearly enough to cause concern or economic damage. Even with the higher populations in northeastern Saskatchewan, we don’t believe the levels would be causing economic damage yet.” Driving surveys conducted in Alberta in 2016 resulted in similar findings.

The warmer winter in Saskatchewan followed by warmer spring conditions saw swede midge adults flying a few weeks earlier than in previous years. For now, researchers have confirmed two generations of swede midge on the Prairies, but data collected over the summer may show three generations are possible under conditions like those in 2016. Warmer winters and wetter summers like those experienced this year are good conditions for swede midge, so populations could keep increasing, which could mean heavy damage in the future. Researchers are seeking funding to continue swede midge monitoring across the Prairies over the next few years.

Biological control options and other strategies
Researchers in Saskatchewan began looking at potential biological control in 2014 with the confirmation of two species of parasitoids in canola. Led by recently retired AAFC research scientist Julie Soroka and postdoc Lars Andreassan, these were the first parasitic wasps (Gastrancistrus sp. and Inostemma sp.) identified in Canada for potential control of swede midge. In Saskatchewan, parasitism was noted in the field during the 2016 driving surveys. Another parasitic wasp of swede midge was recently found in Quebec.

In Ontario, researchers started looking for parasitoids this summer and found fairly high rates of parasitism in some canola fields in southern areas of the province. “We did weekly sampling throughout the summer and found rates of four to 20 per cent parasitism over a six-week period at several different locations,” Hallett explains. “Species identification is tricky, so we are in the process of having these species identified by a specialist to determine if they are local species or not, but it is a good sign that natural enemies are beginning to show up against swede midge.”

Both Hallett and Mori are applying for funding to look at biological control with these parasitoids in more depth.

Another area of research is host plant resistance and other possible sources of genetics that may help with plant breeding efforts. Hallett and others have assessed several different host plants, including cruciferous weeds and cover crops in Ontario that have resistance to swede midge damage. Mori has a new four-year project underway to expand this work into the Prairies.

“The goal is to identify any resistance mechanisms in cruciferous weeds in the Prairies as well as older historical canola lines that swede midge may avoid and to determine why,” Mori says. “We will be looking at potential early season and late season host plants when canola is not at the right growing stage to see if they have any resistant properties. If we can identify resistance mechanisms in any cruciferous weed plants, or canola lines, then this technology can be provided to breeders for new canola lines under development.” The project is in very early stages, with seed and plant collections initiated in 2016 and laboratory bioassays to begin in the winter.