Feb. 2, 2015 - A new U.S. National Aeronautics and Space Administration (NASA) satellite now orbiting Earth will scan land surfaces for the next three years to detect moisture held in the topmost layer of soils. Agriculture and Agri-Food Canada (AAFC) scientists will use these soil moisture measurements to help improve our understanding of processes that affect weather and climate, and in turn, agricultural production.

On January 31, 2015, NASA launched the Soil Moisture Active Passive (SMAP) satellite from California. This mission will produce the most accurate, highest-resolution global maps of soil moisture, temperature and freeze-thaw cycles ever obtained from space. The information will be particularly useful for the agriculture sector by helping to improve weather prediction and crop productivity models, monitoring areas affected by drought or excess moisture and improving flood forecasts.

According to Heather NcNairn, a research scientist at AAFC's Eastern Cereal and Oilseed Research Centre in Ottawa, the SMAP satellite will become an important source of soil moisture data for Canada, and "SMAP data will support agriculture across the country."

The SMAP mission, headed by NASA, is a large-scale collaboration with scientists, governments and universities in both the U.S. and Canada. AAFC has been an important partner in developing this mission, along with Environment Canada, which is the lead federal department, and the Canadian Space Agency.

In 2012, an AAFC team from Ottawa and Winnipeg ran a large field campaign, or validation experiment, called SMAPVEX12. Soil and plant measurements were collected in the Portage La Prairie–Carman area of southern Manitoba and were used to calibrate and validate SMAP processing models. Jarrett Powers, manager with AAFC's knowledge and technology transfer office in Winnipeg, says these data are now available to scientists worldwide.

For the duration of the SMAP mission – at least three years – AAFC will provide NASA with data from AAFC's network of nine soil monitoring stations in Manitoba and five in Ontario installed at private farm sites. That information will be used to assess data coming from the satellite and test soil moisture mapping products. 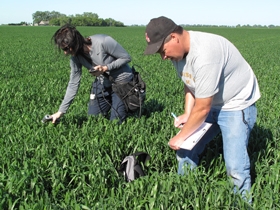