For the agriculture industry, soil moisture is an important variable for decision-making and risk management. Farmers, researchers and governments rely on soil moisture data, maps and information for a range of uses, from providing crop yield estimates and land use planning, to forecasting the potential risks of climate change and severe weather events such as drought or floods.

Researchers at Agriculture and Agri-Food Canada (AAFC) and various partners have been working on developing scientific methods and models for measuring and monitoring soil moisture over the past few years. “We started working in Manitoba collecting data a few years ago, and in 2011 installed permanent in situ soil monitoring stations on a number of private farms,” explains Dr. Heather McNairn, AAFC team lead, research scientist, Geomatics and Remote Sensing, in Ottawa. “We selected an area in south-central Manitoba from Portage la Prairie to Carman, which includes a mix of annual and perennial field crops, as well as other land cover such as pasture and forested lands.”

McNairn’s research team uses data from the Canadian RADARSAT-2 satellite and other sensors in their research to develop models for soil moisture monitoring. “We are also one of the international sites working on the U.S. National Aeronautics and Space Administration (NASA) Soil Moisture Active Passive (SMAP) satellite field campaign project called SMAPVEX,” explains McNairn. “NASA plans to launch its new SMAP satellite in 2014, which will measure surface soil moisture and temperature to produce maps of global soil moisture, temperature and freeze/thaw states on a regular basis. We are working with NASA and SMAP partners to calibrate and validate the models, and to make sure they work under all kinds of agriculture conditions.”

The NASA SMAPEX 2012 field-testing campaign was carried out over six weeks in June and July. The campaign was a huge success, with the collection of 45,000 soil moisture measurements at about 700 sites. NASA had two aircraft and crew, which flew 16 days over the six-week campaign, and were equipped with the same sensors as the SMAP satellite for data collection. Scientists took similar measurements on the ground for soil moisture and temperature, plant biomass, surface roughness and other factors. The project also generated excellent data from satellites, including the Canadian RADARSAT-2 satellite, the German TerraSAR-X satellite and optical satellites such as RapidEye and SPOT.

“We had a wide range of weather conditions over the six weeks from very wet to very dry, which allowed us to collect really good information on soil moisture,” explains McNairn. “We also measured crop growth and collected biomass at 300 sites, with crops only a few inches high at the beginning of the campaign and at almost full height at the end. The logistics were very complicated with over 70 people involved at different times over the six weeks, making this the most complex field research project I’ve ever co-ordinated in the past 20 years. The level of dedicated effort by everyone made the project a success.”

From field data collection to soil moisture maps
McNairn and project partners have committed to getting the ground and satellite data and calibration completed and to NASA by mid-November 2012. “We are in the middle of getting all of the data processed properly and calibrations of the various measurements to make sure all of the data and models are as accurate as possible,” says McNairn. “To ensure the accuracy of the data collected on the ground and by the aircraft, the collection methods and tools all need to be calibrated.” NASA is doing all of the calibration on the aircraft data.

Researchers and students at the University of Manitoba were collaborators on the SMAP project. Using experience from other soil moisture modelling projects, they assisted with some of the data collection and calibration efforts. “Calibration of something as difficult and variable as soil moisture components is quite a challenge, but is absolutely critical to the project,” says Dr. Paul Bullock, professor with the department of soil science. “My group has been doing research to develop accurate soil moisture models using remote sensing and real-time weather data. The opportunity to collaborate on the SMAP project was a rare opportunity to help build a dataset much larger than any institution could do on their own.”

“The SMAP Project is probably the biggest dataset looking at soil moisture that I’m aware of, and we expect great innovation, science and applications to come out of this project over the next few years,” says McNairn. “Once the complete dataset is sent to NASA in November 2012, it will also be shared with all of the people who participated in the campaign to provide them with the first opportunity to use the information for their research projects.” The data will be made publically available in July 2013 so that other researchers in Canada or around the world can connect with the data.

“Some of my graduate students will be working on different ways to bring these datasets together, and we expect in two or three years to have a proof of concept developed,” explains Bullock. “Then it will be taking that research concept and determining if it is feasible to implement it on the ground in everyday decision making. We also have new real-time weather platforms that can be integrated into these modelling projects, such as WeatherFarm and various provincial weather stations. The key to taking these concepts and making them useful for farmers and others day to day will be to make sure the concept works and is reliable. And then it has to be communicated in an effective way.”

Bullock adds they look forward to new tools and new innovations coming out of the project. “We all benefit if agriculture can be more cost efficient or cost effective,” says Bullock. “I can easily see hundreds of millions of dollars of management decisions being affected by soil moisture information. The whole cost of production is tied to management decisions made every day, which is where I see this project having a big impact.”

Bullock’s priority is to advance the area of soil moisture modelling and provide people with timely soil moisture conditions and information on how they change over time. “For areas like Manitoba, an important part of knowing soil moisture and having reliable data is to be better able to forecast flood conditions, which is worth billions,” says Bullock. “Soil moisture is also directly related to crop production, impacting everything from yields and nutrient management to crop quality and pest management. Risk management strategies, forecasting and even insurance programs are all tied to soil moisture.”

McNairn notes that AAFC will also be starting its own research as soon as the data processing is complete. The priority is on taking the current soil moisture monitoring products that use Canadian RADARSAT-2 satellite data and adapting them to be ready when SMAP data is up and running. Both NASA and AAFC intend to eventually release these datasets to the public, which will include both images and soil moisture maps. “At AAFC, we want to make sure all the map products are available, and are looking at finding the right venue to make those accessible to farmers, researchers, governments and anyone interested in this data.” 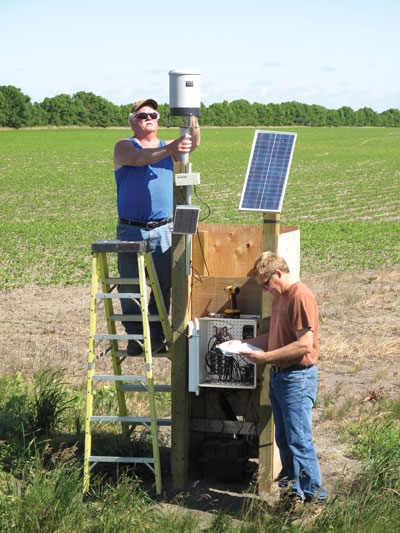 (L-R) Tom Hansen and John Fitzmaurice For the agriculture industry